Zimbabwe: A country left behind on AIDS surges ahead 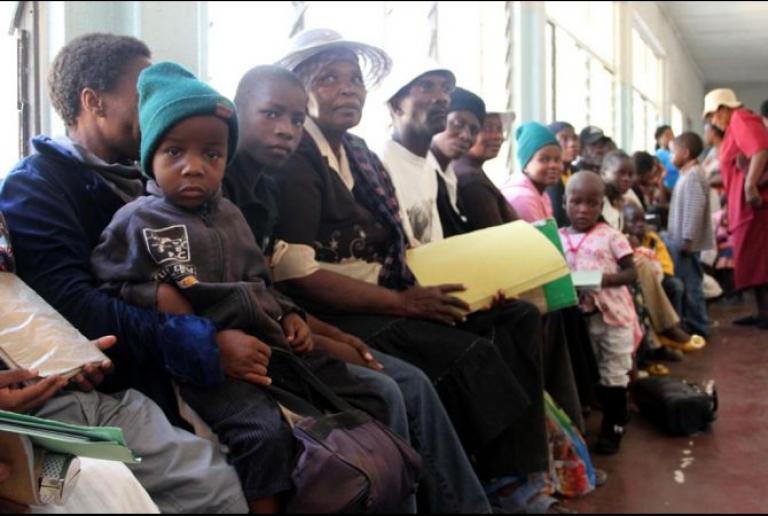 by Farai Mutsaka and John Donnelly

DUFUYA, Zimbabwe — Tendekai Sibanda, a single mother of two, starts her day at 4:30 am. After preparing a meal on firewood in a dimly lit thatched hut, she trudges village to village, covering up to 12 miles a a day on foot to attend to bed-ridden AIDS patients.

In this poor village roughly 200 miles southwest of Harare, the capital, the fight against AIDS is distinctly Zimbabwe’s own. The country was largely left behind in the AIDS fight by the US government when Washington started the President’s Emergency Plan for AIDS Relief (PEPFAR) in 2003 under President George W. Bush.

Instead, Zimbabwe relies on its own well-mapped network of community health workers such as Sibanda, who fan out daily across the country to make sure the country’s AIDS patients receive care. Evidence is emerging that the model works. Zimbabwe’s HIV prevalence among adults aged 15 to 49 stood at 15 percent in 2011, down from 18 percent in 2006, according to national Demographic and Health Surveys.

With funding from the Global Fund to Fight AIDS, Tuberculosis, and Malaria, and planning organized by Zimbabwe’s Health Ministry, health workers were trained and given a small salary. They became the country’s front-line health soldiers.

Sibanda couldn’t believe her good fortune, saying, “I had always yearned for an opportunity to learn more health care and actually caring for the people.”

Still, what makes the case of Zimbabwe so curious – and even confounding to many outside observers – is that this country found success even though it was largely cut out of the big spending by PEPFAR’s list of 15 so-called “focus countries.”

A simple decision made nine years ago – countries either made a favored list, or were left off – meant hitting the aid jackpot or being left at the loser’s table. Zimbabwe wasn’t the only loser. Others were Malawi, the Democratic Republic of the Congo, Burundi, Cameroon, Lesotho, and Swaziland. Each of them, based on a decision made by a handful of people in Washington, lost out on hundreds of millions of dollars by not being a PEPFAR focus country.

The reason for excluding Zimbabwe from the bulk of funds was no mystery. Its government, led by long-time President Robert Mugabe, was mostly punished by Western donors because of its election fraud; human rights abuses; and its policy to seize white-owned farms and give them to black Zimbabweans, many of whom were cronies of Mugabe.

Are countries better off with less funding?

So how did Zimbabwe reduce its HIV prevalence rate with dramatically less assistance than other countries? Are countries forced to depend on themselves in some instances better off without huge amounts of donor funding? And is Zimbabwe’s experience a model for a future when PEPFAR begins to dwindle and countries fend more for themselves?

Experts disagree on the answers to those questions, and several point out that other outside funders – notably the Global Fund, a multi-lateral effort, which includes roughly one-third US funding – played a major role in supporting almost all of Zimbabwe’s efforts.

Since 2003, the Global Fund has earmarked $538 million to Zimbabwe for health programs, including nearly $193 million for HIV/AIDS. In comparison, Zimbabwe’s contribution, while steadily increasing from a national AIDS levy from $5 million collected in 2006 to $19 million in 2010, has covered a small fraction of the cost. Overall, the country’s AIDS fight has had more than a $1 billion less to spend than Ethiopia’s in the last decade.

But no one denies that Zimbabwe was forced to do more with less. And its results are better than many PEPFAR-favored countries.

Geoff Foster, a Zimbabwe-based pediatrician and a global HIV expert, said that the local response strategy – the one deploying thousands of workers like Tendekai Sibanda – is largely responsible for the decline in HIV prevalence. He said Zimbabwe not only learned from its own experts but also from other African countries, such as Uganda, to focus its response on educating people to stop having multiple sex partners.

Foster, who founded the Family AIDS Caring Trust in 1987 to promote sexual abstinence outside marriage and faithfulness within marriage, said that the strategy had its problems at the start.

“We were involved in HIV prevention work, yet national HIV rates were increasing rapidly in the 1990s,” he said, citing UNAIDS statistics that at one point said Zimbabwe’s HIV prevalence rate was 30 percent – a figure that now is acknowledged as exaggerated due to faulty statistical modelling.

Foster said that his organization joined with the Mutare City Council in 1993 to start a peer education program aimed at stopping multiple sexual partnerships. A later study showed a 50 percent decrease in sexually transmitted infections in city clinics in one year.

He said PEPFAR failed to more explicitly promote monogamy or even partner reduction, although one-third of the US prevention funding in PEPFAR was the so-called “ABC” strategy: abstinence, being faithful, and condoms. This strategy was widely criticized in many donor and AIDS expert circles, but Foster said he believes that it worked in Zimbabwe and Uganda. Uganda used the approach of treating HIV primarily as risk avoidance, treating HIV as a behavioural rather than a technical and medical challenge.

“Imagine if $15 billion was made available to address lung cancer on a global scale. Surely we would have to address smoking behaviour, not smoking in the first place, stop smoking or at least take fewer cigarettes per day,” he said.

Dr. Henry Madzorera, Zimbabwe’s health minister, said in an interview it was easy to successfully implement the Uganda strategy in Zimbabwe because HIV evokes a personal touch to many Zimbabweans.

A commitment rooted in personal loss

“Almost every Zimbabwean has a relative or close friend who died from the disease,” he said. “That has also emerged as a strength, because even when we are low on money we can always count on our people. Communities always rally together when it comes to organizing against HIV,” he said, adding that despite the fall in prevalence rate, Zimbabwe still is in dire need of funding.

The National AIDS Council, a quasi-government organ set up to coordinate the fight against HIV, launched a community response programme emphasizing prevention in 2001. By 2004, the Council claimed that the prevalence rate had dropped from 30 percent to 24.6 percent among those aged 15 to 49.
Still, doubts remain about the statistics. Some of those doubts are rooted in the reality in the country’s hospitals and health clinics.

The public health infrastructure has suffered from years of neglect and of tens of thousands of trained health workers fleeing the country for better-paying jobs elsewhere. In the hospitals, record keeping often is suspect and buildings are dilapidated.

At Harare Central Hospital’s opportunistic infections unit, patients form long lines for prescription drugs and doctors say they are running out of space for patients in the wards.

Dr. Tapiwanashe Bwakura, who joined the hospital straight from medical school in 1988 and now heads the opportunistic infections unit, said finding enough health workers is a huge challenge. Only a handful of doctors and nurses are around to serve a daily stream of between 200 and 300 people, he said.

One patient, who declined to give her name, interviewed in the line said receiving AIDS treatment went smoothly when she started in 2006, but the last few years has been more difficult because of the growing numbers of patients.

At Chitungwiza Hospital, located in a city of more than 4 million about 20 miles south of Harare, skeleton staff serve more than 800 patients a day. Several staff members said they were struggling to cope. Still, said hospital chief executive Obadiah Moyo, the situation was worse before the Global Fund intervened.

The situation, according to Zimbabwe officials, could turn worse quickly without outside assistance. Christopher Tapfumaneyi, the health ministry’s permanent secretary, told a special parliamentary committee earlier this year that 66,000 people living with HIV could be cut off the drug because of “donor fatigue.”

“Our international partners are on their way out and we now have to rely on the Ministry of Finance. We have submitted bids but we didn’t get the funding. The whole of this year we never got any funding,” Dr. Tapfumaneyi told the parliamentary committee.

The situation worries organizations such as Médecins Sans Frontières (MSF).

“MSF urges donors to make sufficient funding available for free and effective HIV treatment to all who need it. Domestic resources must be augmented with consistent and continued international involvement. Only then can we curb the HIV epidemic in Zimbabwe and similar high-burden, low-income contexts,” MSF’s head of mission for Zimbabwe, Fasil Tezera, wrote in a recent column published on the group’s web site.

In the meantime, the country’s health workers, often for little or no pay, continue to help those who are HIV positive.

For Tendekai Sibanda, 38, there is a personal motivation to continue to help. Her aunt, she said, died in her arms in 2000. Her aunt kept her condition secret for fear of what others would think of her, or whether they would shun her.

“I only knew it was HIV after a while because she would keep it from me,” Sibanda said. “I would accompany her to hospital but I never got inside to hear what the nurses told her. It was only after I heard some friends discussing the symptoms of HIV that I took a closer look at my aunt. I also realized that people were afraid to get close to her.

“Later I got the guts to tell that I had figured out her condition and she opened up,” said Sibanda.

After her aunt’s death, she became determined to work with people living with HIV.

“The problem was that the community was not organized. It was a burden at times I had to carry alone,” she said.

Sibanda began forming discussions on HIV with close friends and relatives, unsure how to open up to a community still treating HIV positive people as outcasts.

“When ministry of health and Global Fund officials came to our area talking about community initiatives, it was like manna from heaven,” Sibanda said. “I knew what I wanted to do but had no idea of exactly how to go about it without support.”

With 13 colleagues — one of whom is HIV positive — they have turned the HIV prevention message into a gospel here. They do all they can for those infected.

“We clean, wash clothes, cook and collect drugs for them,” Sibanda said. “We visit the bed ridden more often and teach their family members on how to treat them and care for them. This kind of work requires courage and patience.”