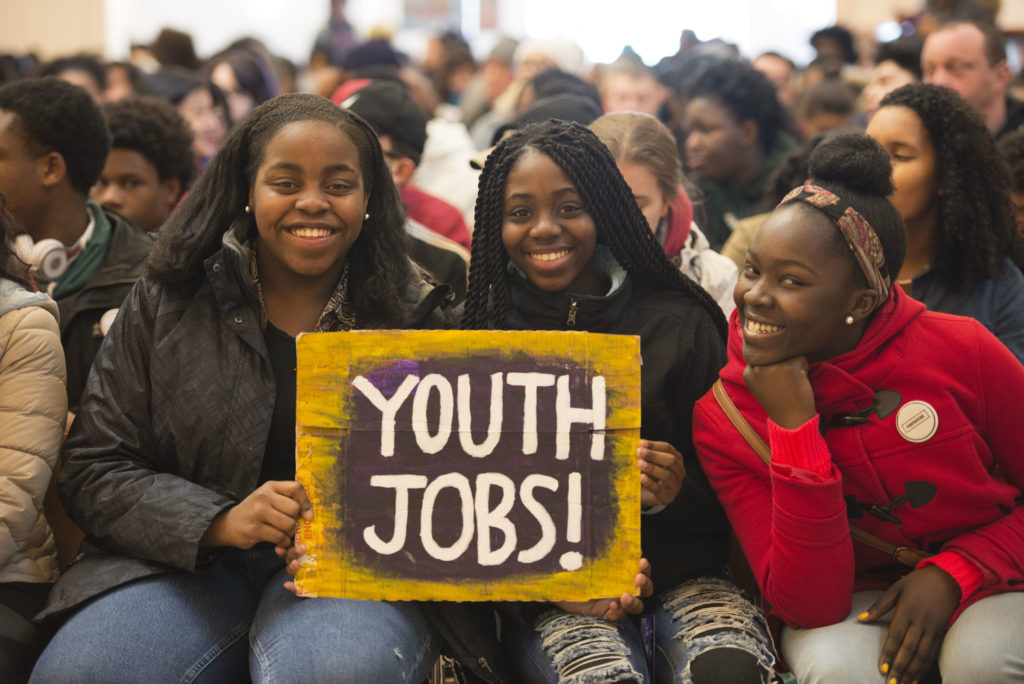 BOSTON — Amid the crowd of hundreds of teenagers armed with megaphones and homemade signs, a line of people in bright orange prison jumpsuits stood out. The red-and-blue lights of two police cars parked along the eastern edge of the Boston Common flashed over their heads.

Ten young men and women, arms linked, broke away from the march and walked towards the barricade before stopping and standing silently in protest. They had written the word ‘jailbird’ in black on their backs.

Approximately 900 teenagers gathered in downtown Boston last week to raise their voices against the dual threats of unemployment and incarceration. The rally was organized by the Youth Jobs Coalition, an alliance of 40 youth community groups from across the state dedicated to creating more job opportunities for unemployed youth, and Jobs Not Jails for the Youth, which creates jobs in high-crime neighborhoods.

Studies have shown that employing teenagers can help them develop a wide range of skills, including learning how to handle responsibility and develop a good sense of time-management. Despite this, 6.5 million young people are out of school and out of work nationwide. In Massachusetts, close to 1 in 7 teenagers are unemployed.

Youth who have had past experiences with crime have an especially difficult time finding employment options, and that’s without factoring in the applicant’s race. Black teenagers are arrested more than any other race nationwide, and the number of unemployed black youths is close to double the amount of unemployed white youths.

“There’s a heavier police presence low-income communities than other communities, and it’s the same issue with education,” Dalida Rocha, a community organizer at the Massachusetts Communities Action Network and one of the rally’s organizers, said. “Budget cuts in public schools, and who’s affected by it? Black kids.”

The Youth Jobs Coalition is asking for $13 million in next year’s state budget to fund the YouthWorks project, an increase of $1.5 million. It would be the highest amount ever given to the program, and 0.33 percent of the state’s total budget.

YouthWorks is a summer and year-round jobs program for low-income and at-risk youth, hiring more than 33,000 young people since 2007. It provides job training and direct employment opportunities for teenagers, with the intention of funding more youth job opportunities, instead of incarceration programs.

Teenagers in Massachusetts made up approximately four percent of the prison population in 2015. Individual states collectively spent about $5.7 billion on imprisoning youth in 2009, even though most of the offenses were considered to be non-violent. The United States spent $80 billion in 2010 on incarceration in general, according to a report from the Hamilton Project.

Breaking down youth incarceration population statistics by race and ethnicity uncovers another concerning issue – the black community make up thirty seven percent of the total number of young adults incarcerated nationwide between the ages of 18 and 29, according to the Child Trends DataBank.

Rocha believes that if there isn’t more of an investment made to combat youth unemployment, teenagers from low-income families are more likely to engage in criminal activity.

“If the money that’s going towards certain policies like incarceration are re-evaluated, then those funds can go towards new jobs,” Rocha said. “It’s worth investing in future generations.”

Jomelly Munoz, a 14-year-old from Dorchester, said providing teenagers with jobs will keep them from turning to illegal ways to make money instead.

‘If more young people had jobs, they’d have something to do with their lives.’

“If more young people had jobs, they’d have something to do with their lives,” Munoz said. “There’s nothing for them to do but be on the streets.”

However, some teenagers say their young age is a strong deterrent for employers to take them seriously in the hiring process. Minors under the age of 18 can work in the state with an employment permit application, but many are turned away if they are younger. However, that doesn’t mean the motivation to get a job isn’t there.

“The funding we receive is limited to youth who are low-income, and we still see such a high demand,” said Grace Sliwoski, a coordinator for YouthGROW, an urban agriculture-focused youth employment and development program that hires low-income teenagers between the ages of 14 and 16. “For our program, we had 258 applicants for 15 open job positions.”

The YouthWorks program itself received 2,000 applications for 350 jobs with little advertising needed, according to Sliwoski. This means fewer than 20 percent of teenagers who apply will end up with a subsidized job.

Amaya Dowd is 16, and wants to be an orthopedic surgeon when she grows up. However, she said finding paid employment opportunities for people under the age of 18 can be difficult.

“I’m going to volunteer until they hire me,” Dowd said. “If I could apply to work at a hospital right now I would be, but I’m only 16.”

Most of the youth employment opportunities currently offered through YouthWorks are with non-profit organizations and government offices, but Rocha is hoping to expand into the private sector.

Some marchers had printed out their resumes before the rally, and during the rally attempted to hand them to Brown Brothers Harriman security guards standing out front of the financial firm’s downtown location. Roche said the guards were very hostile towards the marchers, and threatened to call the authorities.

“They were kicked out right away, and they were just trying to get someone to see their resumes,” Rocha said.

With an increase in funding from the state, Rocha believes new programs would help cover the gap in funding caused by the recent minimum wage increase to $10 an hour. Each youth job costs approximately $2,500 to finance, which means the $13 million dollars would be used to sustain the number of jobs already there, instead of creating more.

The program funds nearly 5,200 jobs in the state, but Rocha said they need to create 90,000 jobs to fill the gap between available positions and teenagers looking for work.

The funding for YouthWorks goes through Commonwealth Corporation, a state government agency in Boston that designs and executes workforce programs. They distribute the money throughout the state using a formula based on population size and economic need. Funding then goes through a local workforce investment board, which distributes the money to programs in specific communities.

Before the budget is finalized in July by the Governor’s office, the Youth Jobs Coalition has the opportunity to pitch an increase in funding to state legislators towards the creation of more job opportunities for low-income youth.

Chad McClain is an 18-year old from Worcester, and an assistant youth coordinator at YouthGROW. He started working there when he was 14, and was offered a job as junior staff after two years.

“It’s more than just money. When you’re young with a job, you’re more focussed on your academics, you learn what’s right, what’s wrong, and what’s important,” McClain said. “A job can help you become more independent.”