Young adults take on climate change and the establishment in New York, Paris and Marrakesh 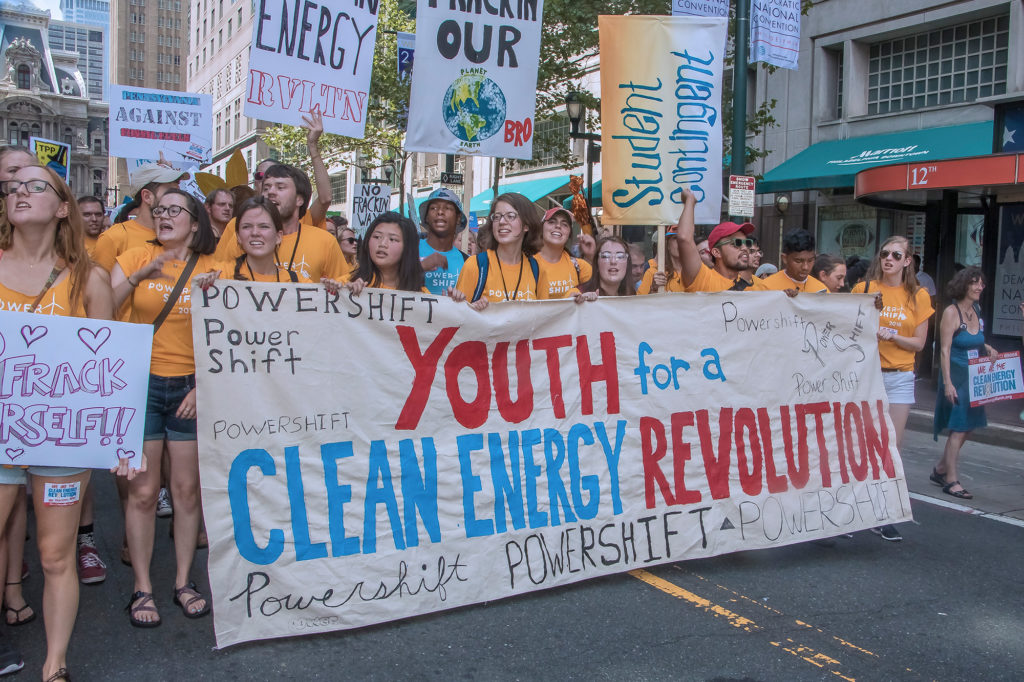 NEW YORK – Climate change is taking center stage this week at the 71st  United Nations General Assembly. The number of countries that have ratified the terms of the Paris Climate Change Agreement now exceeds 55, the number required to make the agreement enforceable. World leaders are one step closer to enforcing the most ambitious global environmental effort in history.

For young people who stand to see the full impact of climate change on their generation, long talks in conference rooms aren’t enough. They brought a sense of urgency and a desire to bring the fight against rising temperatures and sea levels beyond UN halls.

“I left [Paris] disappointed that it was going to be up to our movements and not our political leaders,” said Anthony Torres, 21, who was a youth delegate at the 2015 climate conference in Paris (COP 21), for the youth-led advocacy group SustainUS.

The Paris Agreement, adopted last December, commits 195 countries to capping global warming at 2 degrees Fahrenheit above preindustrial levels, with aspirations of only reaching 1.5 degrees. Before it can be implemented 55 countries that represent at least 55 percent of global emissions, must ratify the treaty.

Another 31 states added their ratifications of the accord during a ceremony organized by the UN Secretary General yesterday, bringing the number of countries to 60.

News of the historic participation comes exactly one year after the UN adopted a new set of global development goals for 2030, called the Sustainable Development Goals (SDG). Young people say it’s proof that the climate goal — to take urgent action to combat climate change and its impacts — is garnering the most momentum.

“If you don’t get climate change right, then the SDGs won’t succeed in the long term,” said Melissa Peppin. The 22-year-old from Melbourne, Australia is a project leader for the youth division of the Sustainable Development Solutions Network. The network was launched by UN Secretary-General Ban Ki-moon.

“SDG 13 is the underpinning of every single Sustainable Development Goal,” she said.

For Peppin, the success of all the goals – from empowering women and girls to making cities sustainable – are interconnected.

Peppin was also in Paris for the climate talks; she’s one of many young people at the General Assembly who are gearing up for the next round of climate negotiations in Marrakesh, Morocco, this fall.

In Marrakesh, world leaders and representatives from the groups most vulnerable to climate change will be tasked with figuring out how to implement the Paris agreement. The outcome of the international negotiations held in November will determine whether the Paris Agreement will fall flat or result in enforceable steps to stop the consequences of climate change.

Young people are hopefulm but a bit wary of the upcoming conference.

“There were times I felt completely tokenized,” said Peppin, recalling her experience in Paris.

She and other young climate activists expressed disappointment after leaders, including UNFCC head Christiana Figueres, walked out of youth-focused events early.

“What’s the point of having side events for young people if only young people attend?” Peppin said, “We need to be in the decision making.”

Siamak Sam Loni is setting out to raise the voices of young people at Marrakesh. At 25, he is the global coordinator for Sustainable Development Solutions Network Youth.

“Half the planet’s population is young. You leave them out of the process, you’re wasting their potential,” Loni said, “If we told their stories, support for youth would go up, innovation would go up, intergenerational efforts would go up, and you’re going to get a much more collaborative and inclusive process for achieving the SDGs and the Paris Climate Agreement.”

In Paris, young adults launched the social media campaign #Zeroby2050, calling for zero carbon emissions by the year 2050. They succeeded in pressuring world leaders to set a long-term goal of phasing out greenhouse gas emissions in the second half of the century while also including language about “intergenerational equity.”

Yet the biggest disappointment for young people and other climate activists was the decision to limit global temperature increases to 2 degrees rather than 1.5 degrees.

Scientists calculate that 1.5 degrees is the amount of global warming that must not be exceeded, in order to avoid the most devastating impacts of climate change. Although people around the world are already experiencing displacement, as seas rise and natural disasters intensify.

Torres says young activists plan to keep pushing for 1.5 degrees and #Zeroby2050 throughout the rest of the General Assembly and Marrakesh climate talks. For him, the long-term goal in the Paris Agreement of phasing out carbon emissions in the second half of this century is weak.

“The long-term goal doesn’t ensure at all that we’ll reach zero by 2050 and leaves room for countries to set less ambitious fossil fuels plans than we need to achieve 1.5 degrees,” he said.

The national commitments from each country signing the treaty so far puts the world on track for a 3.5 degree temperature rise.While Torres recognizes the significance of 60 countries committing to the climate agreement, he says he still sees a lack of real political will. He and other young activists are supporting indigenous groups protesting the Dakota Access pipeline.

“If we are really serious about an effective move away from fossil fuels, we need to stop these pipelines now,” he said.

Torres is passing the torch to the next group of youth delegates from across the U.S. who will attend the 22nd Conference of Parties in Marrakesh.

“We’re not depending on the United Nations Framework Convention on Climate Change to include us in negotiations,” said Ben Goloff, 23, a SustainUS youth delegate who will represent the group in Marrakesh.

Goloff was present as an observer during the ceremony Wednesday when the Paris Agreement reached 60 commitments.

“Young people have no formal voice at negotiations, and we have the greatest stake in the adoption of the Paris Agreement,” he said.

Still, Goloff believes he and other young adults can create as much impact through grassroots mobilizations

“We’re putting an enormous burden on young people to somehow figure out how to suck CO2 out of the atmosphere,” said climatologist James Hansen, referring to a proposed method of meeting Paris Agreement targets by burning biofuels and capturing the CO2 they emit.

“Not only do young people face a future of environmental degradation,” he said, “they will also be saddled with the cost of clean-up projects.”

And he’s not just issuing empty platitudes. Hansen is helping a group of 21 young people—including his eldest granddaughter—to sue the U.S. government for failing to protect them from climate change. Hansen said that the group is developing plans to file a separate lawsuit against fossil fuel companies.