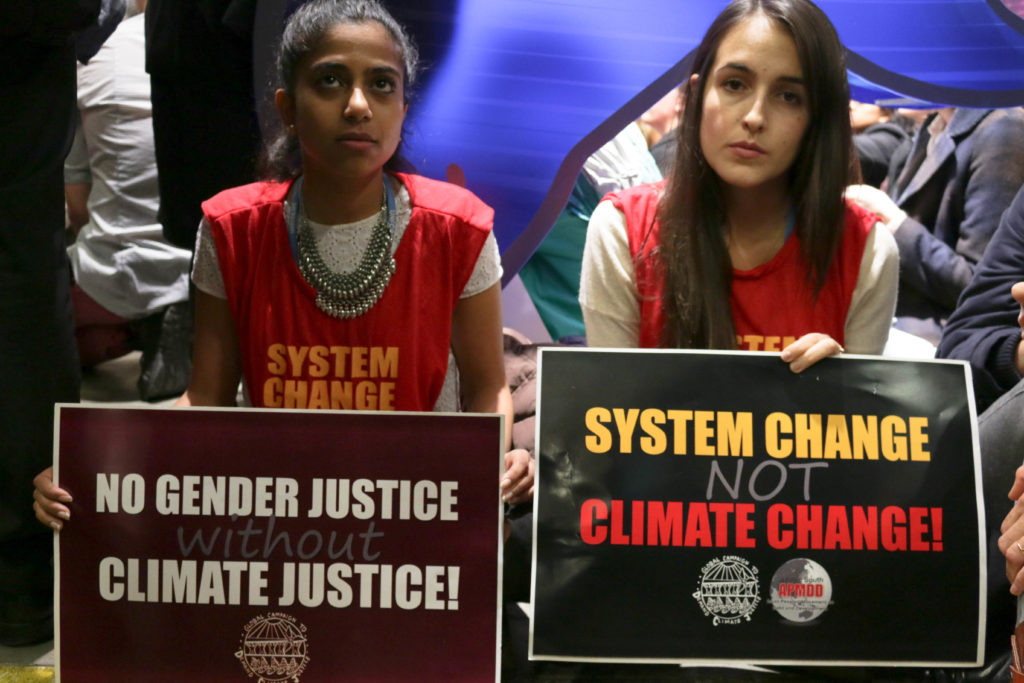 Prachi Rao, 25 from Australia, and Juliana Velez, 26 from Colombia and the United States participate in a sit-in protest outside of the plenary where the climate negotiations took place. The two advocates want to see youth and women's rights included in the final climate agreement. (Photo by Justine Calma/GroundTruth)

LE BOURGET, Paris – With the new draft text of the international climate agreement released today, hundreds of environmental advocates – many of them under 30 – came together inside the halls of the United Nations’ climate conference, known as COP21, in protest of what they deemed was a subpar draft agreement. After being forced outside by security staff, the group covered a miniature replica of the Eiffel tower in posters with their unmet demands, and toilet paper. They chanted: “We are unstoppable, another world is possible.”

After having campaigned for months to ensure that climate action would protect future generations, they were disappointed by the changes to the draft text that occurred between Saturday and Wednesday – a text that stands to be adopted by the 195 countries here in Paris to negotiate a climate agreement.

The draft “does not meet our standards for climate justice and it does not meet the standards for survival for people around the world and so we have come to show our discontent,” said Collin Rees, 25, the director of partnerships of SustainUS, a coalition of youth advocates from the United States.

Delegates from SustainUS are fighting to eliminate carbon emissions and fossil fuels by 2050, to develop mechanisms to cope with irreparable loss and damage due to climate change, and to promote intergenerational equity – a concept that calls on negotiators to act now in order to protect generations to come. The latest draft, by contrast, omits references to youth and gender equality, and has not yet committed to a reduction in emissions.

Rees’ frustrations were echoed by James Young-Drew, 26, a member of the New Zealand Youth Delegation to COP21. He was particularly concerned about the deletion of intergenerational equity. “The draft text has just been released and we think it is unacceptable,” said Young-Drew, 26. “As a young person we will be disproportionately affected by climate change and we need the Paris agreement to recognize that fact and to protect future generations with a clause about intergenerational equity.”

Prachi Rao, 25 and from Australia, and Juliana Velez, 26 and from Colombia and the United States, were concerned about the loss of “intergenerational equity” but they were equally disturbed by the deletion of gender equality as well. They came as representatives of the Women’s Environment and Development Organization and Women and Gender Constituency and were surprised that gender equality, which was previously mentioned in the earlier draft, had been dropped from the text.

The youth protestors were hopeful that their voices would be heard by delegates who now turn to hammer out a final agreement.