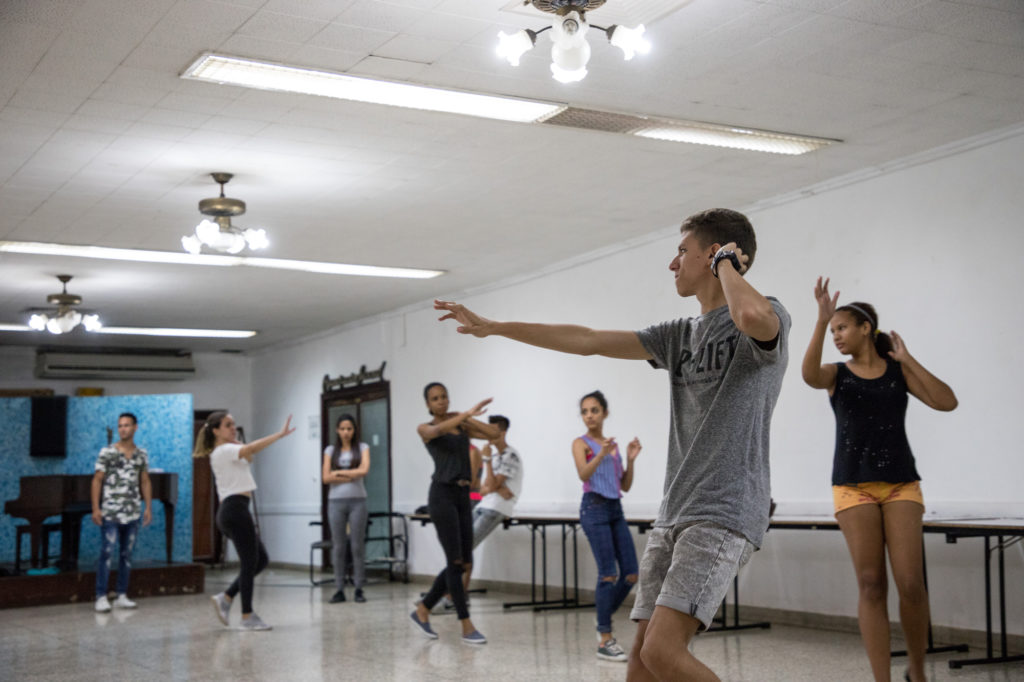 Abel Hernandez Eskenazi, front right, dances with other members of the youth organization at their weekly dance group May 14. Eskenazi, 17, has been leading religious services since his Bar Mitzvah four years ago. (Photo by Riley Robinson/The GroundTruth Project)

HAVANA — A clear voice rings out into the synagogue. It pierces through the blasts of the seven air conditioning units on the wall, through the squeals of the children and even through the large, wooden doors separating this room from the rest of the world.

“It’s like a responsibility,” the sociology student at the University of Havana said. “It’s a part of your life. I am not OK if I am [at home] Friday evening.”

Said is not the only young Jew here who feels this way. Since the Cuban revolution nearly 60 years ago, emigration to Israel and the United States diminished the community and forced its remaining members to struggle to support themselves both spiritually and financially.

Without a full-time rabbi anywhere in the country, laypeople, particularly young adults like Said, have taken over roles normally reserved for clergy — out of four leaders on an average Saturday morning, at least two will be under the age of 25. They are determined to raise the community from its nearly dormant state to something full of life and celebration.

“They will be the future leaders,” said Adela Dworin, the community’s president. “The Jewish community will become a dwindling community, which can disappear without our youngsters who are so, so proud to be Jewish.”

Dworin, who was born in Cuba to Polish parents, has been leading the synagogue, located in a quiet suburb of Havana, for 12 years. She has been involved since she was a teenager. Since then, she has hosted Friday night and Saturday morning services in the cavernous building, with its tall archway, gold Hebrew letters and grand staircase.

But today, young people in the community are often the ones with the most Jewish training. They read from the Torah, lead prayers and even perform the hagbiya, the ritual lifting and displaying of the heavy scroll.

“They know more Judaism than their parents and grandparents, because we lost two generations in these 58 years,” Dworin said. “Now, we have a new generation who attend the Sunday school, who are madrichim [leaders], who learn about Judaism.”

At the core of Beth Shalom is its official Youth Organization, led by Said herself. She began attending synagogue with her family when she was 10 and fell in love. Now, she spends most of her evenings inside the small room at the back of the social hall reserved for her group. Youth join the organization after their Bar or Bat Mitzvah.

“I didn’t want to come because I didn’t know anyone,” Said said. “But I start coming for the summer course, then I get into the Sunday school, then with a Bat Mitzvah … and everything is amazing and every day I’m here.”

As the synagogue faces an emergency budget cut and closures two days a week, the passion and drive of the community’s youth are ultimately keeping hope in everyone’s minds.

“I have here a lot of brothers and sisters without any blood connection,” she said, smiling at a group of young people laughing across the room. “It’s like that. It’s like a big family.”

Dworin met Fidel Castro in late 1998. Standing barely five feet tall, she looked him up and down and asked why he had never visited Havana’s Jewish community. He replied, “You never invited me.” So, she asked him to come to the upcoming Hanukkah party.

“I told him Hanukkah — he liked revolutions, you remember — so I told him it was the revolution of the Jews,” Dworin said.

Since then, both Castros and new president Miguel Díaz-Canel have visited Beth Shalom — Fidel at that Hanukkah party, Raul in 2010 and Díaz-Canel just a few years ago while he was vice president. But the community looks much different now than when it began.

In 1906, North American Jews came to Cuba and founded the first Ashkenazi synagogue. Immigrants from Turkey and Syria founded the first Sephardic communities in the 1910s. Through the 1920s and into the 1930s, Eastern European Jews began to arrive, escaping the persecution of their home countries and hoping to eventually obtain visas to the United States. Very few ever managed it, so they settled down and began the laborious process of building a new Jewish community in Cuba.

Because they had fled Eastern Europe, these Jews were very poor. They worked as peddlers or small store owners, selling shmatas, or headscarves. They soon gained momentum. By 1959, there were 15,000 Jews in the country. Havana was home to five synagogues, Jewish private schools and other Jewish organizations. Beth Shalom itself was built in 1955. But it was the year of the revolution.

“Many Jews decided to emigrate, not because of any kind of persecution or anti-Semitism, but because … private businesses were confiscated,” Dworin said. “You can find more Cuban Jews in Miami than in Cuba.”

The community dwindled. Even for Rosh Hashanah and Yom Kippur, two of the most important Jewish holidays, there were not enough people coming to the synagogue to make a minyan, which requires 10 Jewish adults to permit communal prayer.

After the collapse of the Soviet Union in 1991, many Cubans returned to their religious roots and to the synagogue, which in turn reached out to the Jewish Joint Distribution Committee, or JDC, in the United States for help. The JDC connected them with an Argentinian rabbi who leads a community in Santiago, Chile. He agreed to visit several times a year and provide spiritual guidance to the Cubans.

Dworin remembers the days before the JDC. She has watched as the community bounced back from almost nothing to today, where there are now 1,000 Jews in Havana and more than 200 in eastern cities such as Santa Clara, Camaguey and Santiago de Cuba. Nearby, a Sephardic synagogue hosts two weekly services and maintains the country’s only Holocaust Museum. And in Old Havana, an Orthodox synagogue still operates.

Beth Shalom, which affiliates with the Conservative Jewish movement, houses a library that contains more than 15,000 books. Jewish artifacts brought by foreign Jewish tourists are scattered across every available counter. In Dworin’s office, there is a prominent photo of her with Canadian Prime Minister Justin Trudeau. In the lobby, a framed note written by Steven Spielberg in 2002 hangs amid other memories.

Things are not the way they were before the revolution, and they likely never will be. But those who remained after were able to rebuild.

Despite these successes, the community is now facing a new set of challenges. Since U.S. President Donald J. Trump and his administration repealed policies loosening the travel embargo, the community has received fewer and fewer visits from American synagogues bringing donations and supplies. It’s not that they can’t come, Dworin said — religious aid visas for groups are still available to Americans. It’s that they don’t come.

They have reached out to the JDC, asking for emergency monetary support. To save money in the meantime, they have closed the synagogue on Mondays and Wednesdays except for the conversion classes. But Dworin has not given up. She has led the community through worse.

“We are not receiving many visitors from the U.S. and that hurts us a lot,” Dworin said, shaking her head. “Thanks to the visitors and the love and the contributions of the American Jewry, we exist.”

The synagogue has made sure that when young people come, they have things to do. Their break room has computers, Wi-Fi and a television. They get together for rikudim, the Hebrew word for dances, every Tuesday night. In 2013 and 2017, the community had enough funding from abroad to send delegations to the Maccabiah Games, a Jewish multi-sport event for youth held every four years in Israel. They won medals both times.

But in the end, they themselves say leading the religious services is their most meaningful role.

“I was always attracted to the ceremonies when I was preparing for my Bar Mitzvah,” said Abel Hernandez Eskenazi, 17, one of the service leaders. “I really liked the songs and getting more involved in that sense.”

Eskenazi, who spoke through a translator, began leading services the weekend after his Bar Mitzvah four years ago. His mother works in the synagogue office. His whole family is here.

“The most special thing about us is that despite being a pretty small community, we are very strong,” Eskenazi said. “Precisely the sense of unity that we feel is our most important element.”

Moises Prinstein Fernandez, 18, another service leader, likes to read Torah as often as he can. He said the opportunities the synagogue has given him have been invaluable.

“I, from the time I was really little, was interested in the liturgy and the religious services,” Fernandez said through a translator. “Now I have the opportunity to, every Saturday, read the Torah.”

One of them is Samantha Cardenas Saltiel, 16, a high school student in Havana. She attends the Monday night class with her 18-year-old brother and her parents. The four of them are converting in honor of Saltiel’s grandfather, the only Jew in the family and their only link to the community.

“I want to follow the steps my grandpa took,” Saltiel said. “They are preparing me to be a part of the religious services. It’s a dream for me.”

They have been studying for months, preparing for an appearance before a rabbinical tribunal in December. This tribunal, called a beit din, will determine if they have learned enough to become Jewish.

Four years ago, Dworin said the synagogue had 80 conversions and 27 weddings in the same week, and it’s looking to be a similar number this year. Because there are so few Jews, intermarriages are high — so this synagogue actively works to convert the relatives of community members.

“We never convert anybody who is not linked to a Jew,” Dworin said. “Our religion is not a proselytizing religion.”

When Saltiel talks about the beit din, her voice shakes. With bright eyes, she says she’s both excited and scared — hoping and hoping that she will be able to join her grandfather’s tradition.

“I want to do the parsha,” Saltiel said, referring to the chapter of the Torah read each week in synagogue. “I’m learning to read Hebrew. I have a teacher. I am preparing for that.”

Fernandez knows how she feels. This synagogue is their home. No matter what happens, they know where they want to be.

“Everything I have right now has been thanks to being part of the community,” Fernandez said. “The majority of my friends, my family — I consider them my brothers — They are here and I met them here.”