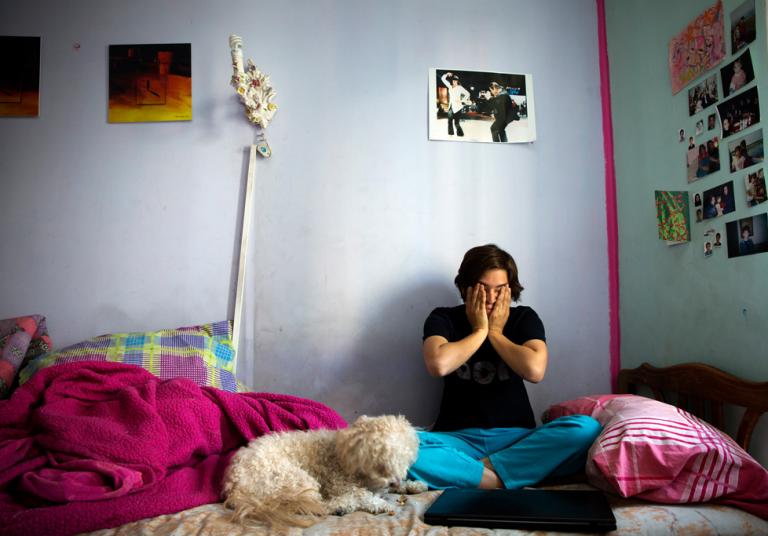 TEHRAN, Iran — Five years ago this week, protests erupted in Iran following the contested re-election of the populist former president, Mahmoud Ahmadinejad. Many young Iranians were dissatisfied with his administration’s inability to address their needs, focusing energy and spending resources on programs and policies they felt ignored their futures.

Promising to reverse the trends of the Ahmadinejad era and bring prosperity and opportunity back to the country, Hassan Rouhani won the presidency one year ago. Rouhani is having some success repairing Tehran’s diplomatic relations while pushing for the removal of Western sanctions, but so far gains made on the international scene have done little to jumpstart the Islamic Republic’s lethargic economy or create new jobs, the numbers show.

Years of sanctions, strong family networks and a social welfare system that subsidizes the incomes of most Iranians have all contributed to an environment in which not working has become sociably acceptable. Yet millions of young Iranians are unsatisfied with their lives and choosing a variety of paths in the hopes of improving them — often by leaving Iran.

“As a generation we do not have anything; we don’t build anything,” said Sanaz Azimipour, 22, an unemployed mathematics student at Tehran University. “If our parents do not give us a room or do not feed us, we will either end up depressed or addicted to drugs,” said Azimipour, who sees no future for herself professionally here after she graduates next year.

Iran’s population has doubled since its 1979 revolution, but the number of university students in the country has increased more than 25 times to over 4.5 million people.

The Labor Ministry has earmarked nearly $75 million to be paid to 100,000 university-educated, unemployed Iranians.

But that’s just a drop in the bucket.

More than 2.5 million young Iranians are currently unemployed, of which 1.1 million are university graduates, Rabiei said recently. He called the current unemployment situation in the country a “crisis” and said, “if the country doesn’t do something effective in creating jobs, we will face a tsunami of 5.6 million educated jobless.”

The country’s official unemployment rate is over 12.2 percent, but some analysts believe the real figure is as much as double that. Youth unemployment stands at over 26 percent, Iran’s Statistics Center recently reported, but experts say the figure could be as high as 40 percent.

“We cannot use the state’s figures as the basis of studies for the correct rate of unemployment, because they are not statistically sound,” said Hamid Haj-Esmaeili, an expert in the labor field.

Bringing home the eggs, if not the bacon

One of the most tangible impacts of unemployment is the change in long-established gender roles in Iran’s patriarchal society.

For generations, men were the main breadwinners of Iranian families, but now due to a lack of job opportunities for men and advancement in female education, women are increasingly working outside of the home, though they receive lower payment compared to their male competitors.

Even in Iran’s most religious city, the seminary center of Qom, many women can find low-paying jobs more easily than their spouses.

In a poor neighborhood made up of rows of brick houses in the dusty desert city, Alieh Galehban, 23, weaves a silk carpet. Besides Shia clerics, the carpets are Qom’s main export.

For up to 12 hours each day Galehban works at the loom to support her family financially. She dropped out of school when she was 16 and began working various at jobs but none of them lasted.

“I left school because I didn’t consider it necessary to have an education for my family’s future,” Galehban said, as she fried eggs on portable stove. The family can no longer afford to eat meat and milk products, and they rely on eggs for their protein.

Instead, she found a job working with a wedding planning company in gender-separated ceremonies in her hometown, but because young people are marrying later and less often, business diminished. So she began weaving carpets.

Practicing the traditional craft from her own home proved easier, as it allowed Galehban to care for the couple’s three-year-old daughter Mobina while her husband looked for work.

Her husband, Mohsen Bakhshan, 25, has been jobless for almost three years and finds this reality difficult to accept, particularly in their hometown, where women traditionally stayed at home and were responsible for raising kids.

Despite receiving monthly cash handouts of $15 from the government and financial support from Alieh’s mother and sister, the couple struggles to manage the daily challenges to pay their rent and afford the expenses of raising their daughter.

Bakhshan got an electrician’s certificate and worked as a temp on several construction projects. These days, though, he sits miserably in the corner of their tiny, one-room home, watching his wife earning for their lives. Despite his potential as an electrician, he has no plan for future. But he dreams of buying a house for his family and starting an electricity shop for himself.

Real jobs are hard to find

In Iran’s lush and humid north, the cultivation of tea and rice were the main sources of income for centuries. In recent decades the area has shifted to become one of Iran’s leading domestic tourist destinations, and many farmers began selling their land as the economic situation in Iran deteriorated.

With many of those family farms gone, the region’s youth have had to settle on informal jobs including street food vending, preparing hookah pipes for tourists and doing low-level construction work on vacation homes.

According to analysts, the vast majority of young Iranians in smaller towns are working in seasonal and informal jobs that would not be considered a formal profession, obscuring the reality of unemployment in Iran.

Mohsen Rezapour, 25, is a photographer who has been dealing with unemployment for more than four years. As a boy, Mohsen dreamed of being a pilot, but an accident left him partially disabled, destroying those hopes.

Now that Rezapour is not able to ride a motorcycle or drive due to his disability, in his small hometown, Ghaemshahr — where public transportation is almost nonexistent — his subjects for photography are limited.

As a part-time photographer he earns $100 whenever he can find a gig providing stock photos for Iranian media.

“I didn’t want to be a farmer like my parents, because it was a very difficult and physically demanding job and the pay was low. And many people look at it farming as a backwards job of the past,” Rezapour added.

Like most young unmarried Iranians, Rezapour still lives at home with his parents, grandmother and his 28-year-old sister who has yet to marry. But he has decided to move to a big city, to take a job as security guard at an electronics storage facility in Tehran.

“It is not a prestigious job, but at least it has a fixed monthly salary,” Rezapour said. “I’m an adult, but still get pocket money from my father, because I can not find a real job and I do not want to work in the street serving tourists.”

No money, no honey

Many young Iranian men, who have higher education and are unemployed, are losing faith in the value of education. As a result, every year the number of male applicants to Iranian universities is declining, leading to a dramatic rise in recent years of university-educated women, who now make up 60 percent of university students.

In a sunbaked alley in Zahedan, the provincial capital of Iran’s largest, poorest and most remote state of Nabi-Ali Sarani, 24, is chatting with a group of other unemployed youth from his neighborhood.

The province of Sistan and Baluchestan, of which Zahedan is the capital, is considered a lawless corner of Iran. It is the main gateway for drugs and insurgence from bordering Afghanistan and Pakistan and inhabited mostly by Sunni Muslims.

Sarani’s story is different from many others in this region as he is more educated, having earned a law degree in Tehran. He returned home a year ago in search of a job to pay back his parents, who has supported him during his education.

“I’ve been looking for a job for a year, but nothing. You realize you studied hard, but honesty until you get a job, studying doesn’t mean anything,” said Sarani, who has three other siblings including two sisters, who all have university degrees and are all jobless.

Drought and instability led to a steep drop of production of 32 percent in the province, which use to be a center of agriculture and industrial factories. The province now has one of Iran’s highest rates of unemployment with over 30 percent, according to its governor Ali Hashemi.

Another obstacle for Sarani and his siblings is that they are Sunni Muslims, who often face discrimination as a religious minority in Iran.

Unlike many in his generation, Sarani doesn’t want to leave his hometown or country because he plans to marry his sweetheart, but others see leaving Iran as the only option.

“My girlfriend’s father won’t let us get married until I have a stable income,” Sarani said. “He is worried about our future together because we do not have a place or income and our parents are not in the position to support us.”

With such a shortage of opportunities and high rate of youth unemployment many young Iranians are seeking new lives outside of the country. Such migration used to be the last resort but has now become increasingly common.

Iran has one of the world’s highest “brain drain” rates. More than 150,000 elite students a year leave the country, according to Reza Faraji-Dnana, Iran’s Sciences Minister, who oversees the country’s higher education.

Azimipour, the math student, is among the growing number of Iranians looking for opportunities abroad.

“I have never regretted that I chose mathematics as my major or studied hard for going to university. I wanted to be a researcher in the field. But now I know that research jobs are rare here and most are in governmental offices,” Azimipour said while checking job vacancy ads in a local newspaper.

Azimipour was born and raised in a middle class family in the west of Tehran, a part of the city dominated by rows of apartment towers that are homes to hundreds of thousands of people in her generation. Although Azimipour had some part-time jobs, her meager earnings didn’t help her single mother pay the bills.

“I worked in several temporary jobs, but they were all a waste of time. Some of them didn’t give me any money because I was a beginner and a student. The little money that some of them paid me wasn’t enough to cover the cost of getting to work,” she said.

Azimipour, who had a chance to spend a summer with her aunt in France, is planning to leave Iran after graduation and is applying for courses in France to continue her education.

“There are more opportunities for growth outside Iran. If you work hard you get results,” Azimipour said. “When you invest in studying and you do not find a proper and related job, then you think you must keep studying more. These days studying itself is considered a job for so many of us.”

Last year, Azimipour moved in with one of her university classmates to build independence from her family, but returned back home after four months because she was unable to pay her rent and other expenses.

So France, where the official youth unemployment rate is also above 20 percent, remains her most attractive option, she said: “Leaving Iran is the only option for those who want a real successful life.”