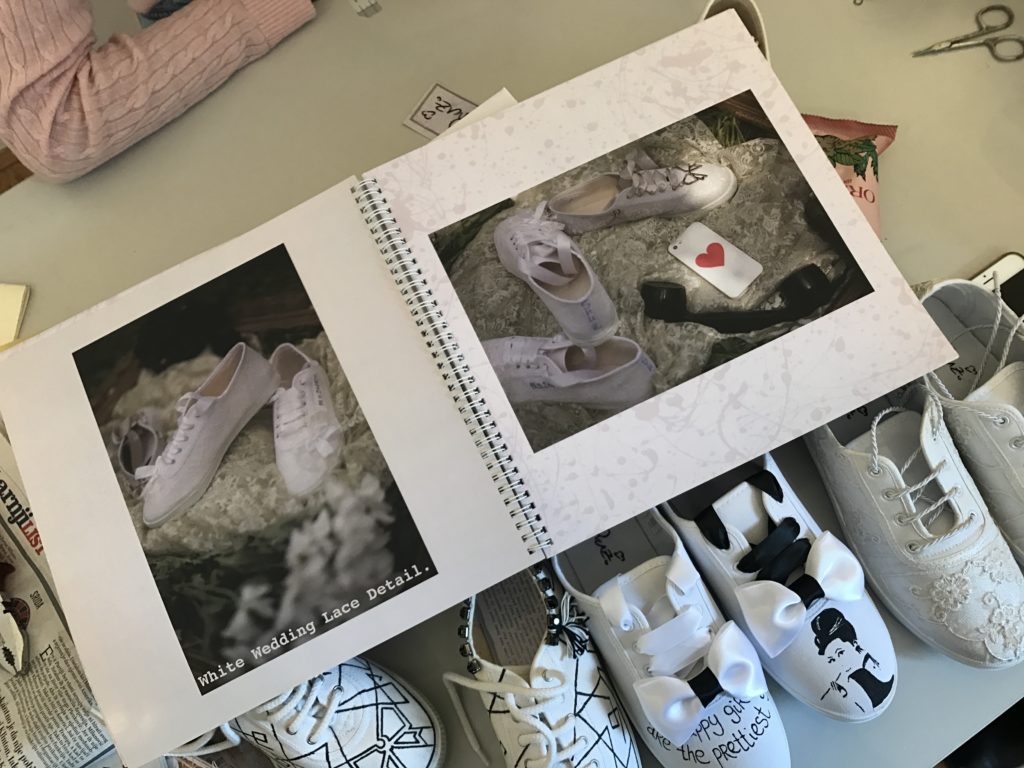 As friends their age left to pursue opportunities abroad, Ljudmila Mihajlović and Maja Žirovčić turned their hobby into a business. (Photo by Karolina Chorvath/GroundTruth)

ZAGREB, Croatia — The floor was cluttered with colorful ribbons and swatches of fabric shoes that became canvases for Ljudmila Mihajlović and Maja Žirovčić to experiment upon.

The two co-founders of Shuz have come a long way since 2010, when they decided they were tired of walking down the street in Zagreb and seeing other women wearing the same pair of shoes they were wearing. So they decided to design their own.

After a friend suggested buying Mihajlović and Žirovčić’s designs for her wedding, their nights of crafting transitioned into a career. Now, their sparkly, hand-painted Shuz are sold all over the world.

Surrounded by students at their university who would later leave Croatia to pursue better jobs, the two never dreamed their hobby would one day become a business. When the pair began, Croatia was experiencing the peak of a six-year recession.

“A lot of creative businesses came [about] because young people weren’t getting jobs,” said Mihajlović. She said the few friends who decided to stay in Croatia became self-employed as artists or entrepreneurs.

Sharon Fisher, senior principal economist at IHS Markit, says Croatia’s economy has been struggling since 2009 and only started to make a weak recovery in 2015. And although the youth unemployment rate is down from its high of 50 percent in 2013, it still sits at a staggering 26.5 percent in 2017. Fisher says that is the highest youth unemployment rate of the 11 countries that joined the EU from 2004 to 2013.

“Our most successful friends have moved to different countries,” said Žirovčić. Many emigrated and began jobs in banking or tourism, and a number of those who stayed in Zagreb now work in the government — one of the few stable kinds of jobs in the country.

Although a new conservative government came into power last year and just recently solidified its position in parliament, there appears to be little public confidence in its ability to prevent people from leaving the country. In September 2016, the nationalist HDZ party, characterized by its distaste for independent media and minorities, first won control of the parliament. After less than a year, Croatian Prime Minister Andrej Plenković fired three cabinet ministers from his junior coalition starting a crisis that only ended on June 9, when parliament approved seven new ministers in a reshuffled conservative-led cabinet.

“I believe we have now secured stability for the functioning of the government and [state] institutions,” Plenković told reporters.

This governmental instability is all too familiar for Croatians. The previous government, ruled by the HDZ in partnership with Most (in English, this is known as the Bridge of Independent List parties), collapsed after just a few months due to a conflict-of-interest scandal. The party retained power running on a highly populist platform.

“It’s all about identity politics,” said Milada Vachudova, associate professor of political science at the University of North Carolina at Chapel Hill. Vachudova has been studying what she calls “party polarization” in the region. Currently, many ruling parties in the area fall into what Vachudova categorizes as TAN — traditional/authoritarian/nationalist. Croatia, Hungary, Poland and the United States are all TAN.

“Discontent is currently on the rise in Croatia,” added Fisher, the principal economist at IHS Markit. “A March poll indicated that 59 percent of Croats think the country is headed in the wrong direction under the new government.”

Between 2014 and 2015 alone, Croatia’s population dropped by 27,700. The former government was so alarmed that it formed the Ministry of Demographic Revival. However, the numbers are still going down.

But Fisher thinks there are specific things the new government could still do to alleviate issues such as youth unemployment. These solutions could include partnerships between vocational high schools and local companies that enable students to obtain on-the-job training and improve their chances of gaining local employment. She also advocates simplifying Croatia’s business rules and regulations. 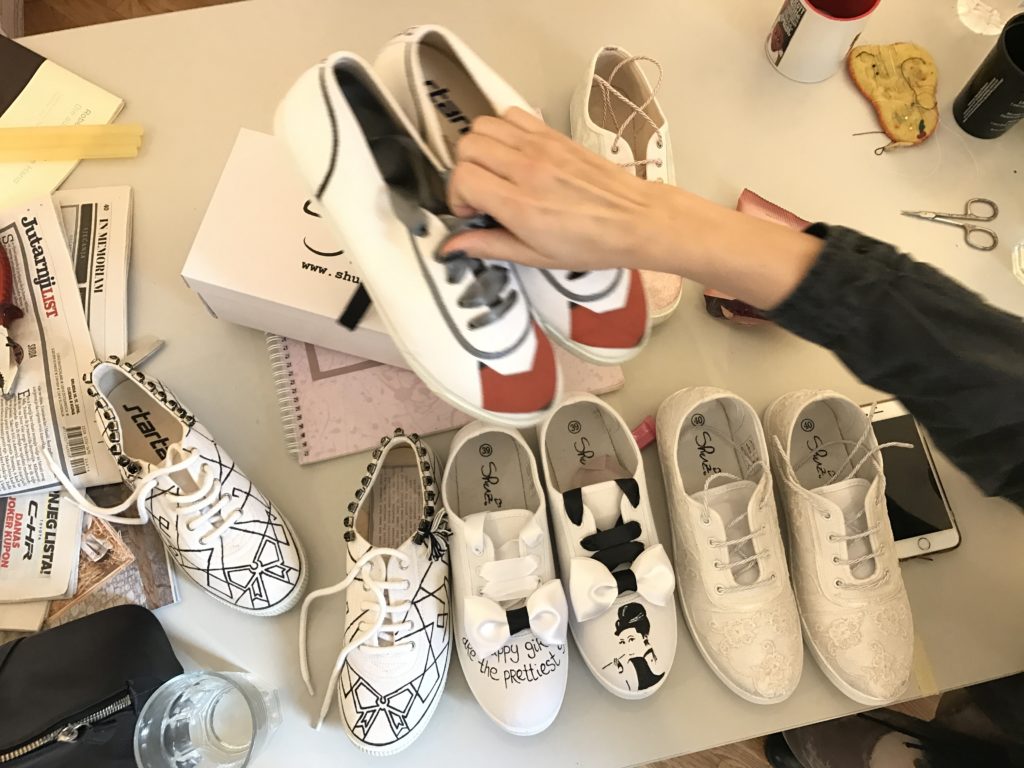 Which is where Mihajlović and Žirovčić come in.

“It’s special when you hand-make something that really brings joy [to the customer],” said Žirovčić, 31, who prefers being her own boss. “In any other job, I wouldn’t be happy. I would go crazy.”

Žirovčić is not alone in this sentiment. A global study done by BNP Paribas found that millennials are “creating more companies, with higher headcount and greater profit ambitions” than any other age bracket.

And in true millennial fashion, Mihajlović and Žirovčić named their brand after one of the first viral YouTube videos. In the video, “Shoes,” an outrageously angsty teen struts around looking for footwear.

“Oh my god … shoes!” Mihajlović and Žirovčić quoted in unison and giggled.

But being an entrepreneur in Croatia isn’t all bows and sparkles.

Although sales of Shuz have doubled since 2010, Mihajlović and Žirovčić hit some roadblocks along the way. During seasons of low sales, they’ve had to borrow money from family members or their boyfriends. And even when demand is incredibly high, they’ve had to cancel orders as a result of not having enough employees.

“You feel unstable,” said Žirovčić. “You can’t count on anything.”

The World Economic Forum notes in their study that the government can play a role in encouraging entrepreneurship. Many in Croatia feel the government has neglected to do so.

In order to fill that void, startup accelerators like ZIP are aiming to provide training and mentorship for aspiring entrepreneurs — most of whom are under the age of 35. Ivo Špigel, ZIP’s co-founder, has been an entrepreneur since he graduated from his university. In 1989, Špigel founded an IT services and software company called Perpetuum Mobile, then followed with ZIP In 2012.

“My co-founders and I felt there were more and more interesting startups and a great lack of any infrastructure, ecosystem and support,” said Špigel.

Now, his startup accelerator has helped create over 60 startups. The organization provides services such as networking events, coding workshops, media exposure and connection with mentors around the world. Despite several more programs being around now than when Špigel founded ZIP, he believes more should be done and he is “very skeptical of the new government.”

He’s not the only one. Most young people and business owners don’t want to wait for business reforms.

HDZ has promised, however, to reduce restrictions, minimize fees and reduce public debt, which surged to 87 percent of the gross domestic product in 2014-15.

Indeed, Fisher notes the Croatian government has proposed a law that would allow the state to offer assistance to companies that are “important for the Croatian economy” (employing more than 8,000 people and with debts of more than 1 billion euros).

“Improving public finances remains a key priority for the new cabinet,” said Fisher. “The new government is aware of the need to upgrade the business environment, but Croatia has been a notoriously slow reformer during the post-communist transition period.”

Mihajlović and Žirovčić love their home and have been proud to create a product that is Croatian made. They’ve come a long way from painting shoes in their apartment and are now able to rent an office in downtown Zagreb. For now, they’re staying in Croatia. But as their Asian market outperforms the demand in Zagreb, the idea of moving their business elsewhere becomes more enticing.

“We love our country, and we want to support it,” says Žirovčić. “But we’re always thinking ‘Where can we go? What else can we do ?’” 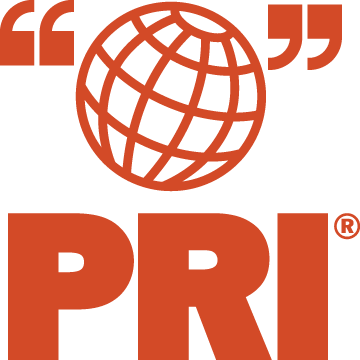