Tracking the impact of Saudi Arabia’s war in Yemen 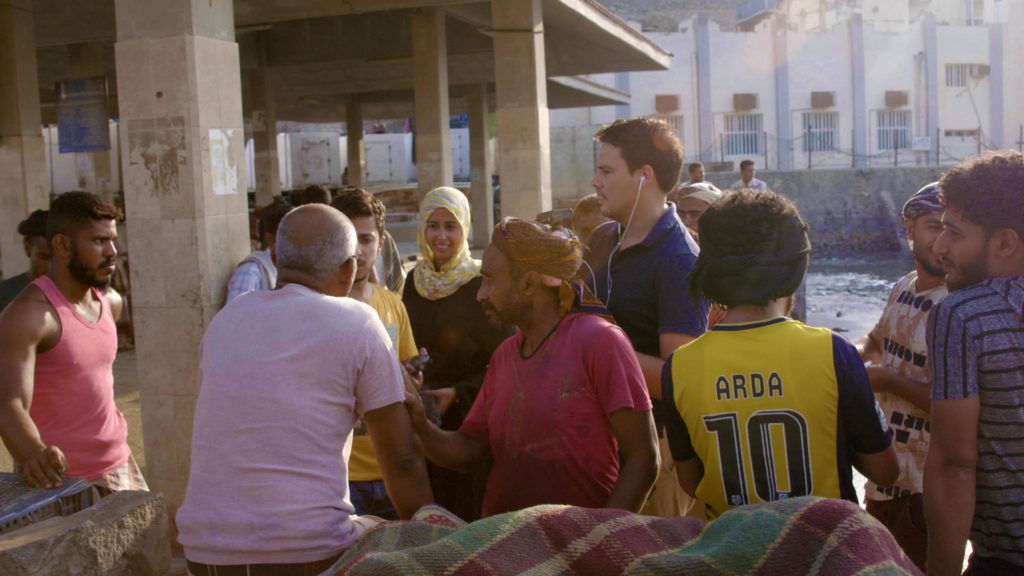 GroundTruth Fellows Neha Wadekar and Will Swanson at a fish market in Aden, Yemen. (Photo by Beth Murphy/GroundTruth)

As fresh conflicting theories surrounding the killing of Saudi journalist Jamal Khashoggi emerge daily, the pressure on the House of Saud is mounting. The focus has widened beyond the murder to include a $110 billion arms deal with the US and the brutal military campaign against Yemen that Saudi Arabia is carrying out with those US-made weapons.

GroundTruth Films Director Beth Murphy has just returned from a rare reporting trip inside Yemen where she worked with GroundTruth Film Fellows Neha Wadekar and Will Swanson. Their extraordinary work will be featured here and with our editorial partners in the coming weeks and months ahead. But for now, we wanted to get a debrief from Beth and the team on the trip.

First, some context: Yemen, the Arab world’s poorest country, has been engulfed in a conflict between Iran-backed Houthi rebels and supporters of Yemen’s internationally recognized government for four years.  In March 2015, a coalition of nations, led by Saudi Arabia, one of the richest countries in the world, and funded by the U.S., joined this war in support of the government of President Abdrabbuh Mansur Hadi. International human rights groups have highlighted the indiscriminate bombing by the Saudis which the UN estimates to have killed more than 10,000 people and caused 40,000 casualties.

The UN estimates that Saudi-led air attacks caused two-thirds of the reported civilian deaths. An estimated 3 million Yemenis are displaced by the war and more than 280,000 have sought asylum elsewhere. The war has created one of the world’s worst humanitarian catastrophes. The murder of Khashoggi has put the spotlight on Saudi Arabia, forcing the world to see the way they exert their power in the region and raising questions about why the US continues to provide weapons to them.

Beth answered a few questions about the work the GroundTruth team did in Yemen:

What drew you, Neha and Will to reporting in Yemen?

Understanding the lives of women and children during and post-conflict is a priority for us and for GroundTruth Films. We know that wherever there’s war, women and children are suffering most. We also know that we have a lot to learn from them about resilience and courage. We went to Yemen because we wanted to see the war there through the eyes of women and meet the women at the center of a brave political movement that is demanding equality in one of the most unequal societies on Earth. The connection between women’s rights and global security is palpable in Yemen.

The trip was planned months before Jamal Khashoggi’s murder. What was it like on the ground during this tumultuous time? Were the Yemeni people you spoke with talking about the murder and Saudi Arabia’s role in the killing?

The day we left for Yemen, two Turkish officials made the announcement that they believed Saudi journalist Jamal Khashoggi was killed inside the Saudi Embassy in Istanbul.  With their statement, “We believe that the murder was premeditated…,” one man’s death at the hands of Saudi Arabia captured the world’s attention in a way that years of their industrial killing in Yemen had not. Most of the people we met have been facing brutalities and injustices for years and are numb to this kind of news. A whole generation is growing up knowing nothing but fighting, fear and deprivation. Not only are their minds not being nourished in school, but their bodies are also under attack – children are literally starving to death and dying of diseases like diphtheria and cholera that had been eradicated before the war.  Families do not have access to water.

Can you describe where you were in Yemen and what it feels like inside Yemen these days. Most of the fighting is in the north, but were you seeing evidence of displaced civilians from the fighting?

We were in Aden, a port city in the south that is controlled by the Saudi-led coalition and supported by the United States.  What we saw there are the impacts of the country’s biggest crisis right now which is in the north – in another key port city: Hodeidah. There’s a huge Saudi offensive happening there today and people are leaving in droves – often walking for days to get to the south. New data released this week says 13 million Yemenis are on the brink of starvation and we met severely malnourished children – all of whom had fled the fighting in Hodeidah.

What does it take to prepare for a trip like this and report safely?

We do meticulous risk assessments, deep research on reporting locations and people, set up in country and out of country support, have detailed plans for check ins with the office and family, secure safe housing (as well as safe houses to go to in case of an emergency), and work with knowledgeable locals who can help us get out of areas when things don’t feel right.

Why do you think Americans know so little about the war in Yemen?

It’s a distant conflict in a region that has been besieged by war over the past 20 plus years… and it’s specifically in the region Americans have been programmed to associate with one thing:  terrorism. It’s also a really complicated war with a lot of players from many countries – all of whom are accused of human rights abuses. Add to that the fact that aid workers have at times been banned and it’s been nearly impossible for foreign journalists to get visas…

And I think there is compassion fatigue – which is one of the saddest things that can happen to us as a human race – that we block out suffering because it seems too overwhelming.  I believe the greatest antidote to compassion fatigue – and the surest way to achieve empathy – is through storytelling. We’ve had the opportunity to spend time in Afghanistan, Iraq, Syria, Sudan, South Sudan, Somalia and now Yemen among other places, and to sit and speak with people about their lives, their dreams and their values.  We need the right kind of stories that allow us to see ourselves in others and others in us. And we’ve seen how when this happens, people are motivated to act for good… to act in a way that will create positive change.