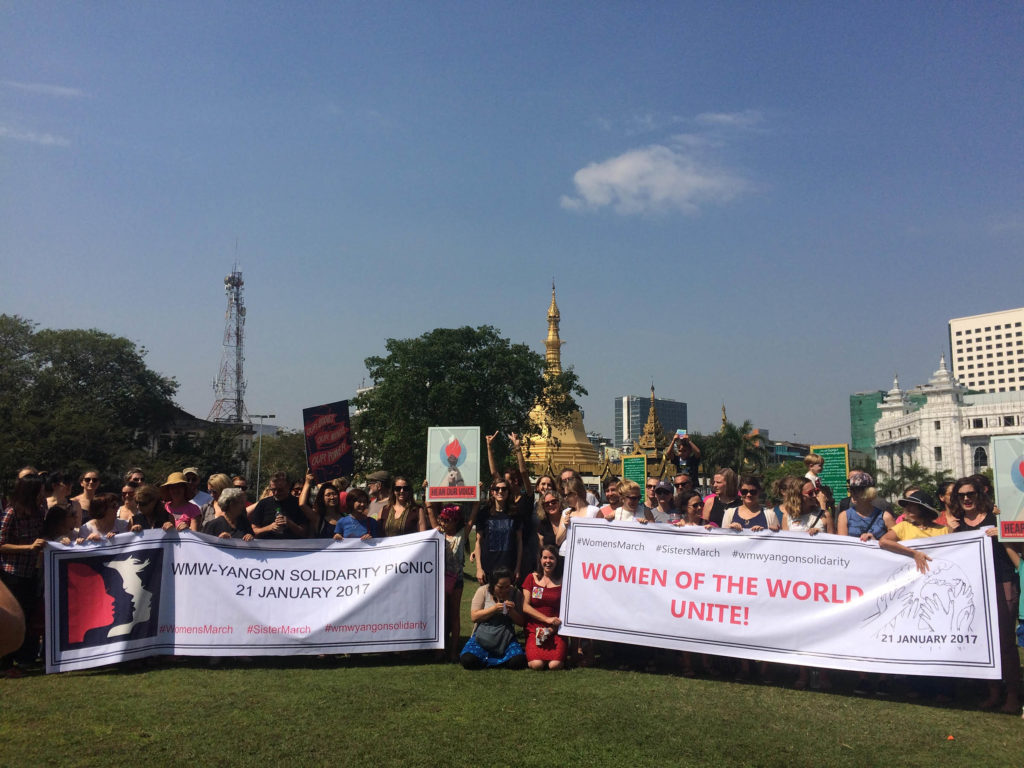 About 70 people gathered in downtown Yangon, Myanmar, to show support for the Women's March on Washington and sister marches around the world. (Photo by Nan Tin Htwe/GroundTruth)

YANGON, Myanmar — On sunny day in this bustling city, dozens of people gathered to show solidarity for the Women’s March on Washington and sister marches around the world.

About 70 women and men, as well as families with young kids, gathered at 11 a.m. local time for what was called a “Solidarity Picnic” at Maha Bandula Park in Yangon’s downtown, surrounded by a shining golden pagoda, church, mosque and colonial buildings.

In the former capital of Myanmar, which was recently liberated from decades of military regime, participants held signs that read, “Women of the world unite!” and “Hear our voice.” They also distributed stickers that read, “We will not be silent so that you can be comfortable” and “Men of quality do not fear equality,” as well as “Black lives matter,” “Climate change is real” and “Immigrants make America great.”

Blaire Davis, who serves as a humanitarian worker in Myanmar and is originally from Rochester, New York, said the event’s purpose was to show their voices for global solidarity.

“After the election, we didn’t know how to react. We didn’t face much effect as Donald Trump won, as we are living in Myanmar. So, we’ve been thinking how we can be more involved in the last two months. These are the voices for women’s solidarity. It’s about women bringing women together because women’s rights are human rights,” he said.

Originally from Macedonia but living in Brussels, a woman tourist who did not want to be named said it’s important that a country like Myanmar be part of this global event.

“It’s wonderful that Myanmar is participating and part of the world event. Yangon is part of the cities which think about this issue. This is solidarity for women around the world. We deserve equal rights.”

Steven Lion, Burmese founder of U Aung San Education Foundation in Yangon, said he decided to participate because he wants to shows his support for the American people.

Barbara Mitchell, originally from Boston and working in Myanmar as a consultant, said she wants to be with women who share the same sentiment.

“After the [U.S.] election result, I was sad that Trump was becoming a president rather than a woman like Hillary [Clinton], who worked on women’s rights for so long. That’s why I want to show my solidarity. Wherever we are, I want this event to become a strength for women’s rights. As a person like Trump is president now, I think we women’s rights activists have a lot more to do.”

Steve Wagenseller, 61, an American teacher at Thalun International School in Yangon, who is originally from Honolulu, said that he is happy to see that people of different ages came together and were interacting in a friendly way.

“I have liberal values. I believe people deserve equality. When they don’t have it, they have to demand it. That’s for every color, race or religion. I believe conservatives deserve equality as much as liberals do. But that doesn’t mean they get to tell us what to do,” he said.

Talking about Donald Trump, he said, “I judge people by their action and what they said. He is not a man of good character.” Wagenseller also said that he is proud of hometown, Honolulu, which he describes as a “very diverse city.”

Kate Macdonnell, originally from Ohio and working in Myanmar, said she decided to participate because she wants to show support for her loved ones in the United States, even though she is in another part of the world.

“Being from the U.S., I am a bit worried about what will happen in the next four years. We have a man coming into power who acts the opposite of everything we would like our country to stand for. I have friends and family who are joining the march in Washington D.C. and other cities. Literally, I’m on the other side of the world. I felt sad not being able to participate,” she said.

She joined the gathering in Yangon because, “I believe you have to be physically be there to show your solidarity.”