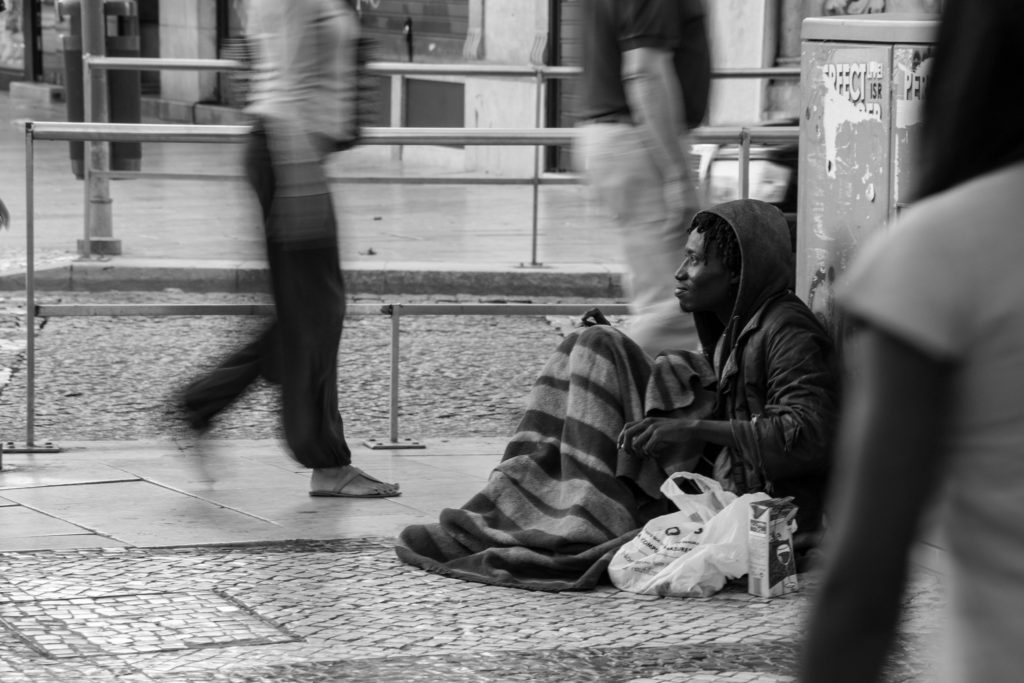 Solutions journalism stories report on the responses to social problems, like homelessness, focusing on how the ideas are implemented, what are their limitations and what can be learned from them. (Photo: Rui Duarte/Flickr)

The speed of the news cycle and the demands of a beat often force reporters to focus more on what is happening and less on why or how. For example, when a wildfire tears through a community, we hear about the damage it causes and the efforts to combat it, but much less of what is being done to prevent or minimize future fires.

That is why since the 1990s a growing number of reporters and editors have argued that journalism’s mission to report the news, hold power accountable and expose wrongdoing needs to expand to include reporting on responses to social problems. Proponents of this approach have called it “solutions journalism” and argue that, if done in a rigorous and extensive way, this approach provides key knowledge that audiences need to engage with the issues that affect them.

This week, I spoke with Julia Hotz, communities manager for the Solutions Journalism Network, a non-profit organization focused on training reporters, editors and the public on the best practices of solutions journalism. The group also fosters collaboration and discussion around these topics through an active community, both online and offline, that provides advice, critiques and connections for those looking to write solutions stories. Hotz offered advice on how to plan, pitch, report and write stories with a solutions focus. Her responses have been edited for length and clarity.

Focus on what works…

For Hotz, solutions journalism stories start by identifying a problem or a need. But that’s just half of the equation: “There is a very strong awareness of the problems that are happening in the world. But we found that there are a lot of misconceptions about what’s working to solve those problems,” she says. That’s where a key question comes in: “Ask ‘who’s doing it better?’ ‘Where have we responded to that problem successfully?’”

A week after the deadly Camp Fire in California, which took the lives of 42 people and destroyed thousands of homes, Fast Company journalist Adele Peters wrote a story highlighting the efforts of engineers, architects and construction companies that are creating houses with materials or designs that reduce the risk of igniting from embers. Peters spotlighted a house that survived the Sonoma County fires of 2017 thanks to its stone walkways, and a house in Australia designed with sliding metal screen and fireproof fabric on the walls, among others.

A recent article by the Philadelphia Citizen reviewed the idea of a Villanova professor to create small villages in vacant lots to combat the homelessness problem in Philadelphia. Unlike other stories written about the same proposal, it went beyond the numbers to explain how the initiative’s focus on building community is what gives it a good chance to be successful, detailing how the design and features of the village will help to make it sustainable.

Beware of PR spins and “too good to be true” stories

Many solutions journalism stories are positive, but that doesn’t mean that journalists can lower their guard and forget to question the claims of their sources. Whether it is city hall, a corporation or a non-profit, Hotz advises journalists to be wary of those who claim to have a silver bullet that can solve a problem. “We say that there’s never a “capital S” solution to a problem,” she says. “The best solution stories often don’t talk about just how one organization, policy or person responded to a problem. The idea is to triangulate the different approaches to solving a certain problem and see if there’s a trendline in all.”

Shortly after it was founded in 2003, biotech startup Theranos became a darling of Silicon Valley, promising to develop a painless blood testing procedure more accurate than any other. Many stories were written about the company and its founder, Elizabeth Holmes, touting the procedure as revolutionary. But a series of articles by The Wall Street Journal in 2015 revealed that the company falsified tests, used unapproved devices and deceived investors and the public. Holmes was indicted in June of last year and the company shut down in September.

To avoid these pitfalls, Hotz recommends to seek evidence of the effectiveness of the proposed solution. According to her, if you don’t have qualitative or quantitative ways to measure if the idea is working, you’re missing a key component of the story.

Don’t fall for the “hero worship”

Stories about social change often have big central characters with strong personalities and an appealing narrative. Although tempting, Hotz warns to not focus on the character and its journey when doing a solutions journalism story, but on the work. “Hero worshipping,” as she calls it, ultimately doesn’t provide a service to the audience.

“Let’s say you’re the mayor of San Francisco and you have this incredible idea to reduce homelessness. You implemented this idea and it worked. I’m a reporter who wants to write a solutions journalism story about this because I want other cities to learn from what you did. If I only focus on you and your motivations, other cities won’t learn anything. They’ll be left without that blueprint plan of what you did to reduce homelessness,” says Hotz.

The best approach, according to Hotz, is to go beyond what the main character says and take a look at their proposed idea from all angles, including its limitations. A solutions journalism story has to acknowledge the shortcomings of the response to a problem so that readers have a complete picture, says Hotz.

Failure is a solution too

Not every idea for social change is going to work. But that doesn’t mean there isn’t value on reporting on them. On the contrary, says Hotz, there’s a big opportunity for journalists to cover the lessons that failed ideas can yield for others.

“The key insight to look for is: Can others learn from this?” says Hotz. “If other people can learn from what you’re writing about, whether the attempt was successful or not and it has the elements we mentioned earlier, then that’s solutions journalism too.”

The Solutions Journalism Network has a very detailed guide on how to produce solutions stories and runs online and in-person workshops frequently. If you want to know more, or join their growing community, visit their Hub.