ON THE GROUND IN JACKSON, MS

Wounds of the past still haunt Mississippi 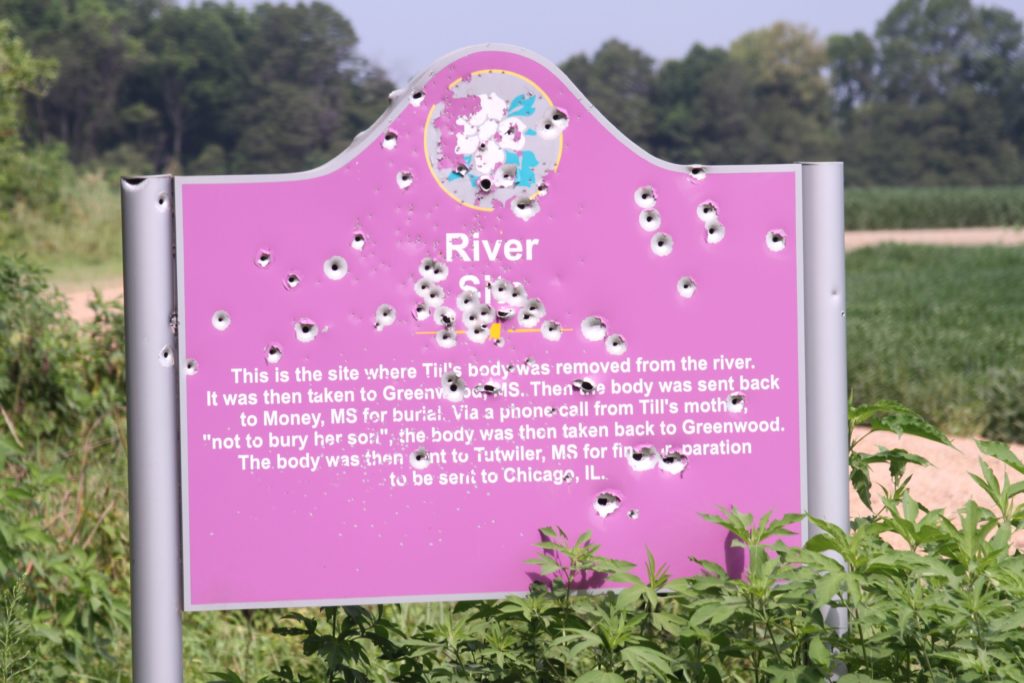 This bullet-riddled “river sign” marked the area where the mutilated body of 14-year-old Emmett Till, the victim of a notorious lynching, was discovered. The sign had to be removed after being repeatedly vandalized. (Photos courtesy of the Emmett Till Memorial Commission)

JACKSON, Miss. — Shortly after relocating to Mississippi last summer, I came face-to-face with the state’s racist past and the inescapable reality of its existing racial tensions.

Here I was, standing in my boss’s garage, counting bullet holes in two memorial signs that symbolized one of the darkest chapters in our nation’s history.

When my boss Jerry Mitchell first showed me a photo of three gun-toting white college students gleefully posing in front of a bullet-riddled sign honoring Emmett Till, the lynched civil rights icon, I thought it was an image from the 1960s, not modern-day Mississippi. Sadly, I was mistaken.

The signs were erected about three miles outside the rural town of Glendora, Mississippi, in Tallahatchie County, by the Emmett Till Memorial Commission, a nonprofit organization founded on the principle that “racial reconciliation begins by telling the truth.” The “river signs” marked the area where Till’s mutilated body was found, but they were taken down after being repeatedly vandalized.

Mitchell broke the story of the last vandalism in July 2019, after a source sent him a copy of the photo, posted on Instagram. The curator of the signs delivered them to Mitchell to aid in his investigation into the incident. It remains unknown whether the students did the shooting.

Till was only 14 when he was kidnapped, tortured and killed in 1955 by a group of white men for whistling at a white woman, an unpardonable sin in the deep South. Three days later, his body was discovered in the Tallahatchie River. Till’s killers were acquitted by an all-white jury but later confessed with impunity.

As I stooped down in front of the signs to begin what was to be the arduous and emotionally draining task of counting and recounting the bullet holes, I thought to myself, “What else can they do to this child?”

The closest I have come to such unadulterated hate was when I participated in a large civil rights march years ago in Forsyth County, Georgia, and witnessed a child perched on an adult’s shoulder chanting, “Go home, niggers!” This is how the seeds of hatred and racism take root.

Initially, I was livid about the desecration of the sign, then consumed with immense sadness as I thought about what Till and so many others before and after him had endured simply because of the color of their skin. The color of my skin and that of my forefathers.

I counted 317 bullet and pellet holes. The message was clear: the perpetrators want to erase the only thing left of Till, his memory.

After he was killed, Till’s mother insisted on an open casket at the funeral, so the world could see what was done to her son. The vivid image of Till’s disfigured body was published in Jet, a national black magazine, and news of the slaying sent shock waves throughout the nation.
Some black youth of Till’s generation say they were haunted by the horrific image and that it had an indelible impact on them. Robert Luckett, a civil rights historian at Jackson State University, said the senseless brutality of Till’s killing awakened their consciousness and hastened their transition from childhood into adulthood, galvanizing many of them to join the 1960s civil rights movement.

Ironically, the recent acts of vandalism and their subsequent news coverage have had the unintended effect of raising awareness of Till.

Patrick Weems, the Till Commission’s executive director, said the damaged signs were replaced for the third time on Oct. 7 with a bullet-proof sign that cost over $10,000 and weighs about 500 pounds. On Nov. 2, a small band of white supremacists tried to film a propaganda video in front of the sign but were scared off by an alarm. The next day, Weems said the commission received the following message:

These incidents reveal the underlying racial tensions that still cast a dark shadow over the state and reinforce negative perceptions of it, making it difficult to recruit much-needed physicians and other highly-qualified professionals.

“Mississippi was the most violent state in America during the Jim Crow era,” Luckett said.

Between 1877 and 1950, the Equal Justice Initiative documented the lynching of 4,084 black people in the South, 654 of them were lynched in Mississippi, which is the highest number of lynchings in the nation.

Although I had some trepidation about moving to Mississippi myself, overt racism is no longer commonplace in the Magnolia State; for the most part, black and white people peacefully coexist. But remnants of the Jim Crow era are still evident in the disparities in the state’s political, economic, social, educational and criminal justice systems, and in the Confederate battle emblem on the state flag and Confederate monuments that blanket the state.

These symbols are a constant reminder to African Americans of slavery and the structural racism that persists in Mississippi, said D’Andra Orey, a political science professor at Jackson State University. In 2001, there was an unsuccessful referendum to change the design of the state flag. “After the flag vote failed, I became extremely disillusioned and angry, and I thought it was best that I leave the state at that time, and in doing so, I made a hard decision to leave my son behind,” Orey said. Ultimately, he returned to reclaim his birthplace; his research examines individuals’ physiological and subconscious responses to the Confederate flag.

Mississippi is a microcosm of the seething racial tensions that exist across America. What magnifies these tensions in Mississippi, aside from its history of extreme racialized violence, is that it is the poorest state in the nation with a black population of about 38 percent, many of whom struggle with intergenerational poverty. This stems, in part, from educational inequities and long-standing policies that political observers and residents alike say are designed to hinder the advancement of black people.

“The white power structure today generally does not engage in explicit racism, but their words and actions are implicitly about racialized power,” Luckett said.

While many black people hold political offices on the local level, they lack economic power, and statewide offices are exclusively held by white Republicans. There is also a wide racial divide in housing, churches and schools, Orey said.

Weems, a white Mississippian, admits he was unaware of systemic racial injustices until 2005, when he attended the University of Mississippi, commonly known as “Ole Miss,” a name derived from the antebellum era, used by slaves to address the wives of their masters.  The gun-toting college students also attended “Ole Miss.”

“It wasn’t until I started listening to black students who were being called the “n” word on campus, and who were not being called on by a white professor for the entire semester, that my view of Mississippi and myself started to change,” Weems said.

“We are never going to bring Emmett Till back or right the wrongs of the past,” he added. “But if both communities, black and white, accept what took place, then we can share a future based on reality and our policies will reflect a more equitable system, a system that takes into account generations of injustice.”

Though the weight of this seemingly simple assignment lingered in my mind for days, I knew it was important.  A journalist’s job is often unglamorous and laborious, but we have the power to effect positive changes in society and improve people’s lives by exposing hatred and injustice. That is what gets me up in the morning.

Shirley L. Smith is an investigative journalist for the Mississippi Center for Investigative Reporting. This dispatch is part of a series called “On the Ground” with Report for America, an initiative of The GroundTruth Project. Follow her on Twitter: @shirleysmithVI.