‘Sister march’ in Nairobi draws hundreds: ‘I can’t afford to sit this out’ 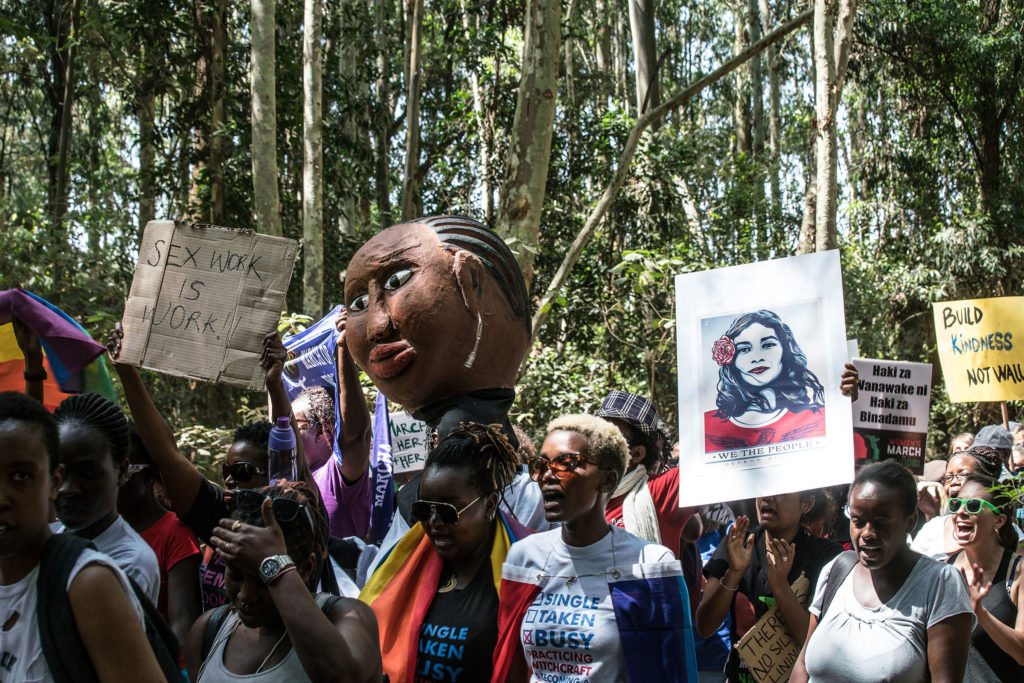 People participate in a “sister march” in the Kenyan capital of Nairobi on January 21, 2017. (Photo by Nichole Sobecki/GroundTruth)

NAIROBI, Kenya — The dusty road leading into Karura Forest is busy with bikers, walkers and dogs on most Saturday mornings. But early today, a single protester stood out. “STOP Sexist Politicians,” read her sign.

She was soon joined by as many as 500 more who turned out for the “sister march” in the Kenyan capital, my reporting partner and I among them. The crowd was a diverse mix of Americans, Kenyans and sympathetic expats of other nationalities, united in concern about changes promised by President Donald Trump – and what those changes could mean for gender inequality, human rights and progressive policies globally.

“America was my political safe-haven,” said Kenyan-American activist Wanja Kariuki. “It wasn’t a perfect political system, but it was one I had learned to navigate as an agitator for immigrant rights and affordable care – a system that as an immigrant, I and millions around the world looked up to. We’ve lost that with the new administration.”

Kariuki left Kenya when she was 14 to join her older sister in the United States and attend high school. She splits her time between her two countries. But last summer and fall she said it was clear where she needed to be. Kariuki joined the Hillary Clinton campaign and was sent to the Pittsburgh outskirts, where she worked to mobilize voters. She came back to Kenya “heartbroken” just before Christmas.

“So I march! I march because the fights for equality we face here in Kenya strongly mirror those in America and both have adversaries – not advocates – in high levels of government,” Kariuki said.

While President Barack Obama was a favorite son of Kenya, President Trump has made no public comments about the country and few regarding the broader continent of Africa. For activists here, that might be for the better, given that his positions on a wide range of other topics tend to favor undoing the generally more progressive policies of the Obama years.

“Trump has given no indication that he considers Africa to be important, except from a security perspective,” said activist and march co-organizer Neela Ghoshal. Originally from Chicago, Ghoshal has lived in Kenya since 2010, first as Human Rights Watch’s country researcher and most recently focused on LGBTQ issues. She said that the new president doesn’t seem convinced of the value of foreign assistance, based on the questions Trump’s transition team has posed to U.S. agencies.

“Although these tend to be small pots of funding, the type of funding that the U.S. does provide to civil society organizations in Africa, particularly those representing marginalized groups like LGBT people, is significant for those groups,” Ghoshal said. “It’s not significant as a portion of the U.S. budget, despite what many Americans would think. But a lot of civil society groups, including those working on other human rights issues – political space, press freedom – depend on that funding from the U.S.”

Ghoshal is also worried about how the Trump administration will view PEPFAR, the global HIV/AIDS prevention and treatment program launched by U.S. President George W. Bush in 2003. The program currently provides antiretrovirals to 11.5 million people across the continent. “A loss of PEPFAR funding in Africa would simply mean that more people die of AIDS,” Ghoshal said.

Her initial motivation for organizing the march was the fear of a rollback of women’s reproductive rights, both in the U.S. and globally, if American funding is withdrawn. “Particularly in the U.S., that seems to be in the cards,” she said. “We already have a situation in Kenya where many women have to resort to essentially back-alley abortions because of the ambiguous status in this country.” (Abortion is outlawed in Kenya unless a doctor deems the procedure necessary in an emergency, but the language in the country’s 2010 constitution is vague.)

Ghoshal carried her 4-month-old baby and a hand-painted sign that read, “Raising My Sons to be Feminists.” The question of role models in the Trump era is particularly relevant to her and her husband, who walked along the march route with their 2-year-old.

The sea of posters echoed this sentiment. Kenya’s constitution includes a “two-thirds gender rule” that states no gender (female or male) should be represented in positions by more than 66 percent – in other words, that women should hold at least a third of all elected and appointed roles. But Parliament – even with seats set aside for women only – hasn’t met that standard. And it’s the institution most closely scrutinized for implementation of the gender rule.

But deeper than the policy, sexism permeates political culture here, with female politicians and public figures often being denigrated for their looks by opponents. The Nairobi governor sparked remarkably little uproar in 2013 when he slapped a female MP at City Hall. He’s expected to win his reelection bid in August.

For Kariuki, the Nairobi protest was a chance to vocalize her fears about the trajectories both of her countries are on – concerns that get to the core of her values, and her identity. “I march because I feel overwhelmed at all the fights that lie ahead of us, but I find relief in the hope of the community and the resistance this march – and others like it – offer,” she said. “I march because as an immigrant woman of color, I can’t afford to sit this out.”

I marched with three people in mind: Two dear friends, both in their early 30s, who are undergoing treatment for breast cancer and — like most of us, but acutely for them — are dependent on health care that’s affordable. I marched for my mom, who had every hope that a fellow feminist from her generation would become our country’s first female president. I marched because what we got instead highlights how much work we have left to do.