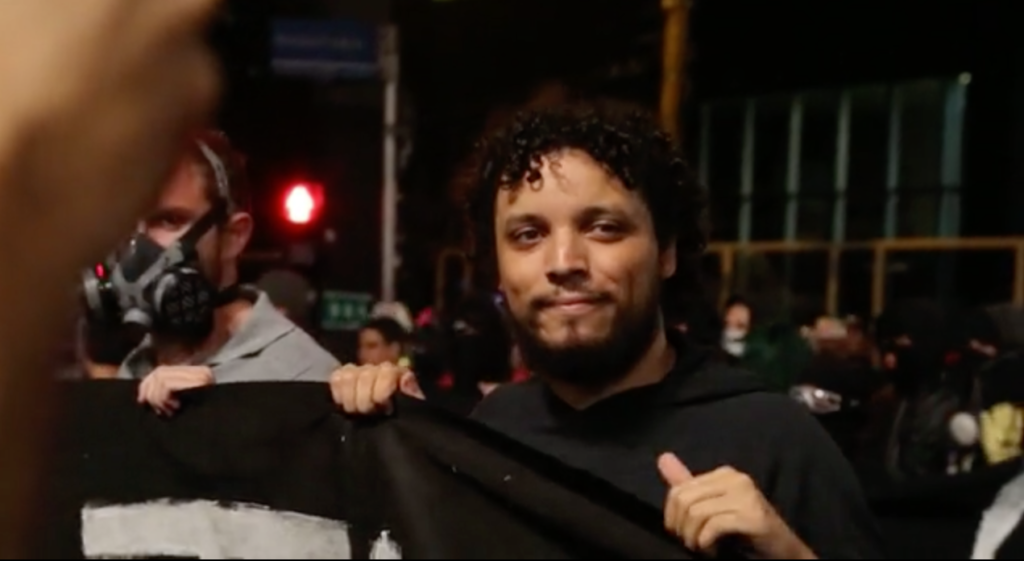 By Corinne Chin and Fabiano Leal

RIO DE JANEIRO, Brazil — The streets of Rio de Janeiro have been Michel Oliveira’s workplace for almost a decade. The 23-year-old has never set foot inside an office or had a boss. At the age of 15, Oliveira dropped out of the city’s public school system to earn money selling sandwiches and snacks on Rio’s famous beaches, Ipanema and Copacabana.

Today, he sells everything from pantyhose to phone chargers near the ports of Central Rio, an area heavily in transition since the city targeted it for renovation and development ahead of this year’s World Cup, currently the subject of large-scale public opposition, and the 2016 Olympic Games.

The historic Mauá Square, once a bustling crossroads for Central Rio’s office workers, has been leveled. Colonial palaces commissioned by the Portuguese royal family in the 1800s today house government offices, cultural centers and private businesses. In two years, developers say, this will be one of the most trafficked tourist areas in the city. But for now, Oliveira’s business is dwindling as construction increases.

In the meantime, unsure of the city’s plans for street vendors in Mauá Square, Oliveira cannot help but question the choices he made as a teenager and the opportunities his generation has had. While Brazilian leaders hope the coming mega events will set the stage for the country’s coming-out party as an economic force to be reckoned with, young Brazilians like Oliveira tell a less promising tale. Unable to find sustainable employment in Brazil, about 42 percent of employed youth work informally, often as vendors, day laborers or waste pickers, according to numbers from the Brazilian Institute of Geography and Statistics.

Though Brazil’s youth unemployment rate is a formidable 15.6 percent, the larger problem for young people is actually underemployment. Working youth may be making a living, but they are not building careers. And the problem, Oliveira said, starts even before they begin looking for jobs: with education.

“There was no point in going to school,” said Oliveira, whose parents and grandparents also worked in the informal economy, eventually affording a comfortable home in Nova Holanda, one of the 16 favelas in Rio’s Complexo da Maré. His classrooms lacked enough textbooks and school supplies for the more than 30 other students who had little interest in being there.

Though he says he is currently financially stable, now living in a favela closer to the ports, Oliveira considers himself a product of Brazil’s “educational apartheid,” a two-tiered system that favors the few who are able to secure desks in the private elementary schools. But as millennials in developed and developing economies around the world are discovering, even a top-tier education is no guarantee of future success.

“The youth are seeing that formal education doesn’t guarantee future opportunities, either. We have thousands of well-prepared, formally educated youth that do not have the future that they wanted,” said Esther Solano, a professor of international relations at the Federal University of São Paulo. “That’s the big problem: the youth don’t see future prospects.”

And the young people of Brazil, many of whom have channeled their anger and resistance against the impending World Cup, place the blame squarely on the country’s political leadership.

“Our generation is lost,” Oliveira said. “But it’s the government who is losing this generation.”

Brazil is the seventh largest global economy and a rapidly rising power, and if the rest of the world has not noticed yet, it will soon. Though youth-led street protests against the World Cup and safety concerns persist, Brazil celebrated record-low 4.3 percent unemployment at the end of 2013. According to Renato Meirelles, the director of the market research institute Data Popular, a growing middle class has welcomed 40 million people since the early 2000s, thanks in large part to government assistance programs and easier access to credit. To put that in perspective, if Brazil’s middle class were a country, it would be 12th largest in terms of population and 18th in consumption.

But it is not its own country, and Brazil ranks among the 20 most unequal countries in the world with a Gini coefficient of 51.91. Unemployment affects youth disproportionately; across the country, one in every five Brazilians between ages of 18 and 29 are neither in school nor working.

Unemployment figures have dropped in part because students are spending more years in school. However, according to the Organisation for Economic Co-operation and Development, this generation is less likely to finish school than their parents were: the previous generation’s college graduation rate was 36 percent, but that number is down to 23 percent for today’s youth. The situation is so bad that the World Economic Forum ranks Brazil — the world’s seventh largest economy — among the 35 worst education systems worldwide.

Even among young people who do find formal work, turnover is alarmingly high: seven out of ten young Brazilians have left a job in the past year. What is more, 80 percent of the jobs created over the last decade during Brazil’s economic boom were low-skill positions with high turnover – every five to six months, according to to Adalberto Cardoso, director of the Institute of Social and Political Studies at the State University of Rio de Janeiro. On average, these jobs pay $320-330 a month — a paltry figure amidst soaring inflation.

“Those are the jobs where the youth tend to be concentrated,” said Lais Abramo, director of the International Labour Organization office in Brasilia, the capital city. “Opportunities are opening up, but the youth are more vulnerable and worse off than others.”

Sports in the spotlight

President Dilma Rousseff has promised next month’s World Cup will be “a Copa das Copas” (the Cup of all Cups) in the “land of soccer.” The country has gone all out: Brazil has spent almost $5 billion on 12 new and renovated stadiums, including more than $400 million on a single arena built in a region with no major soccer teams.

That amount is nearly four times more than the estimate presented during Brazil’s World Cup bid in 2007. Seven years ago, then-president Luiz Inacio Lula da Silva promised the Cup would bring major development projects that were long overdue, especially improvements to the country’s transportation infrastructure. Most of the money was supposed to come from private investments. But so far, according to the Brazilian government, taxpayer money will foot at least 80 percent of the $11.5 billion bill, the most expensive World Cup to date.

Even after seven years of preparation — and with the opening match between Brazil and Croatia only weeks away — the country is still racing against the clock. As the country set aside more and more money for stadiums, Brazilians saw many of the proposed transportation ventures disappear. Six airports will only be completed after the Cup, and between June and July they will be operating according to contingency planning to transport players and tourists.

At the São Paulo stadium where the opening match will take place, there are still temporary seats to be installed and access roads to be completed. According to estimates by federal auditors, the country has forgone approximately 1.1 billion reais ($490 million) in taxes through tax exemptions to FIFA and stadium construction projects.

Brazilians have taken notice. Last June, propelled by the country’s youth, more than a million protesters took the streets in violent clashes with the military police in more than 100 cities nationwide during the 2013 Confederations Cup, the “trial run” for this year’s World Cup. Protests resumed in January in many of the host cities, openly rejecting the World Cup and criticizing the government’s budget priorities.

“There are no decent prospects (for youth in the workforce),” said Rafael Padial, a 26-year-old organizer of the grassroots protests. “They know they will be exploited if they get a formal job. You know that the majority of your friends are working under undesirable conditions.”

Paulo Otaviano, 29, took a nontraditional route to find his dream job. After dropping out of law school, he worked several odd jobs. After two-and-a-half years ‘temping’ with Rio’s state water company, he was unemployed for another two.

“My parents were disappointed, because they wanted to see me become a lawyer,” Otaviano said. “But I don’t see myself at an office or court wearing a suit and tie. No way.”

Today, Otaviano works informally, giving tours of his hometown, the Santa Marta favela. It all started when Gilson Fumaça, a close friend, invited the jobless Otaviano to a government-sponsored tour guide training, one of many jobs that Otaviano says have opened up to favela residents in recent years.

This tour guide training session was open to anyone: the only requirements were a high school diploma and a desire to study, Otaviano said.

On a recent tour, Otaviano led a mother-daughter pair from London to the Santa Marta funicular, the only way to the top of Dona Marta Hill short of a strenuous hike. It’s a beautiful ride with stunning views; one window frames the Christ the Redeemer statue looming atop Corvocado Mountain, while the other reveals Rio de Janeiro shrinking ever lower beneath the climbing cable car. The women are entranced.

“In England, everyone looks to Brazil with very high esteem and with great respect. Everything is so organized,” she said.

Otaviano is not optimistic about any aspect of the World Cup or the Olympics. He will benefit directly from increased traffic to his tour business, but he said he would trade the business for more social equality in his own community.

“I’m actually a little upset when foreigners ask me what I think, because I have to acknowledge that we know it will benefit large business owners to make lots of money,” Otaviano said. “In reality, it’s most likely there won’t be any lasting legacy.”

Opportunity in the favelas

Otaviano takes pride in showing off the charming community where he grew up, a rainbow of boxy houses perched on the side of a steep mountain in Rio’s South Zone. On each tour, Otaviano’s first stop is the top of the peak overlooking the scenic vista of the bay below — “some of the most privileged views of Rio de Janeiro,” Otaviano said. But he doesn’t try to hide the negative aspects of favela life.

“I bring tourists face to face with the problems,” Otaviano said. “I tell them, ‘This smell, this is sewage running out in the open from people’s homes. Kids play around this. It brings diseases.’ That’s a very clear example to illustrate a completely different reality.”

Much like most of Rio’s other shantytowns, Santa Marta started as an informal settlement on the Dona Marta Hill, off the grid of the city’s water and power supply, defying zoning laws. In 2008, Santa Marta was the first favela to be occupied by military police in the city’s war against drug trafficking. Despite the government’s efforts at improvements, residents still live in crowded housing connected only by steep and narrow alleys, built with little urban planning.

“Now, the favelas have earned their space; they are not as marginalized and stigmatized,” Otaviano said. “Before, if you turned up at a job interview and said you lived in a favela, they would say ‘I’m not gonna hire a favelado (a term used often pejoratively in Portuguese to refer to favela dwellers).’”

But, the reality is that many of Rio’s more than 1,070 favelas are full of young people who have not been able to do what Otaviano did, creating his own opportunities for sustainable employment. According to a survey by the Federation of Industries of the State of Rio de Janeiro, FIRJAN, about a third of the youth in Rio’s occupied favelas are out of school and out of work.

“I think that number is rather alarming,” Otaviano said. “The youth in the favelas today have better chances to make it, to grow, to develop professionally and personally. If they have all these opportunities yet aren’t studying, aren’t working, aren’t looking for jobs – we have to ask ourselves why these youth are lost.”