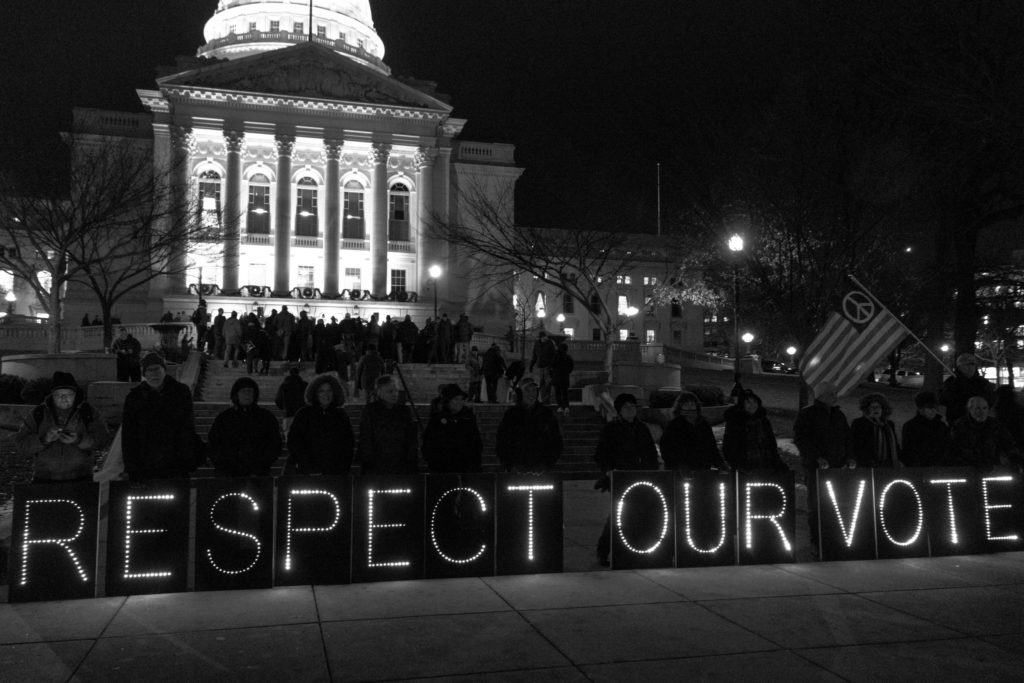 Protesters gathered in front of the Wisconsin state legislature in Madison to reject the Republican proposal to limit the powers of the incoming Democratic governor and attorney general. (Photo by Ken Fager/Flickr)

At a closed-door “extraordinary session” held overnight in the Wisconsin legislature, Republican senators voted to strip power from the incoming Democratic governor and attorney general while also placing limits on early voting in future elections.

The extraordinary efforts come as Republican lawmakers in Michigan, North Carolina and Ohio are using lame-duck sessions to push forward limits on their successors.

“A breathtaking assault on the most basic democratic norm: the willingness of the loser of an election to let the winner rule,” wrote Harvard University lecturer and New America fellow Yascha Mounk in a tweet.

Wisconsin’s State Assembly voted in favor of the measures Wednesday morning and sent it to outgoing Republican Gov. Scott Walker, who in November lost a bid for a third term to Democrat Tony Evers.

The changes expected to be signed into law by Gov. Walker included limiting Evers’ control over the state’s jobs agency (which last year gave the Taiwanese manufacturer Foxconn $3 billion in tax incentives to build a new factory in Wisconsin) as well as his ability to change the state’s work requirements for food stamps and health care.

Early voting would also be reduced to two weeks before Election Day, which is expected to draw legal challenges.

Evers appeared on national TV news programs yesterday, arguing, “This is bad public policy and it’s telling the people of Wisconsin that their vote doesn’t count.”

“The entire thing is frankly a hot mess,” Evers continued. “We won fair and square.”

Prominent Republican businessman Sheldon Lubar expressed his opposition to the extraordinary session in a letter to Gov. Walker earlier this week.

‘What they are planning for the Republican Party of Wisconsin will malign its integrity and lead to its downfall,” he wrote. “Worse, it will damage Wisconsin as it ignores the will of the majority of Wisconsin voters.”

Wisconsinites gathered at the Capitol in Madison throughout the week to pressure legislators to respect the voters’ wishes. They stood outside in the chill, spoke in hearing rooms amid what many described as heavy policing and cheered and chanted in the gallery until Senate leadership ordered it cleared Tuesday afternoon.

Speaker of the Assembly Robin Vos declared that if the extraordinary measures weren’t passed, “We are going to have a very liberal governor who is going to enact policies that are in direct contrast to what many of us believe in.”

After the successful vote overnight, Democratic Rep. Greta Neubauer promised, “We will remember this day. We will remember what it felt like to see our elected leaders receive thousands of calls, get thousands of emails and turn their backs on us. It is clear we are going to have to fight for our democracy. I believe it is worth fighting for.”

Democracy watchers across the country weighed in as concerned citizens and journalists flooded the Capitol in Madison again Wednesday morning.

“Wisconsin has been one of the best function democracies in the US for at least a century,” wrote Seth Masket, a political scientist at University of Denver. “What’s going on in Wisconsin today shouldn’t be dismissed as just one state’s experience. If democracy can die there, it can die anywhere.”