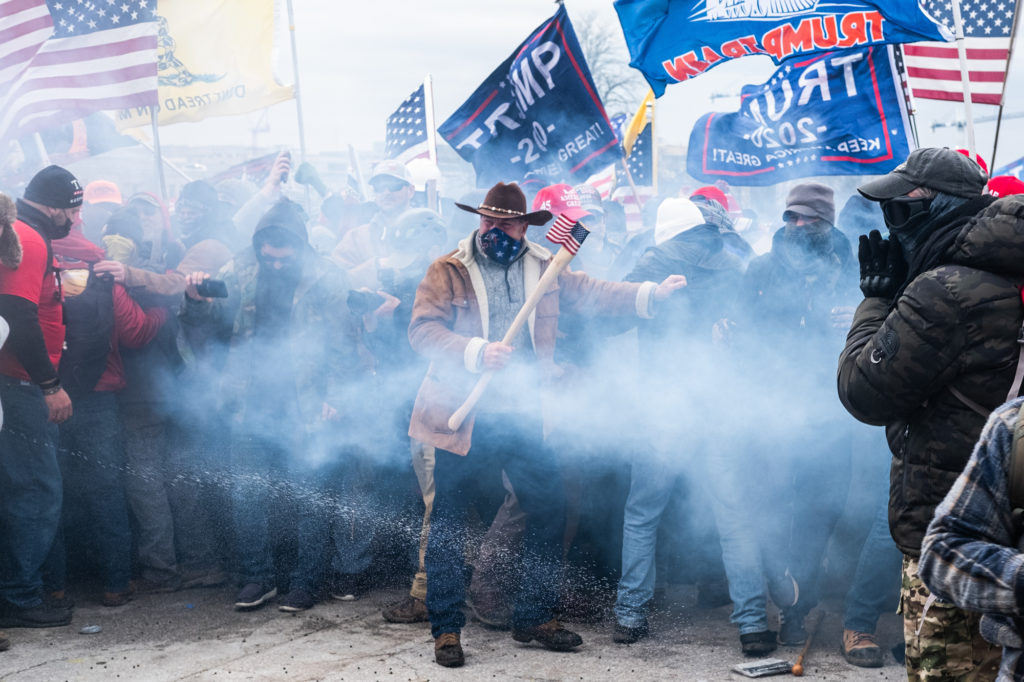 BOSTON — American democracy is in more peril than we realize, and that message came through loud and clear this week on the one-year anniversary of the January 6 insurrection.

President Biden’s powerful address to the nation hit a new tone of forcefulness in articulating what it meant to have “a dagger at the throat of America” on that terrible day last year when President Trump inspired a mob to attack the Capitol building and try to prevent the peaceful transfer of power that has defined America’s democracy since the country’s founding.

The insurgents failed. Democracy held. But, as Biden pointed out, the wounds are not yet healed.

Despite Biden’s efforts to bind the country together, the polarization in Washington, particularly around what actually happened on Jan. 6, seems to be deepening. We are more fractured than ever as a nation. And as many observers pointed out, in many ways we are more divided than we have been since the Civil War.

At GroundTruth, we see a direct line between the crisis in journalism and the crisis in democracy. Since we launched nearly ten years ago now, we’ve defined our mission as supporting on-the-ground reporting in under-covered corners of our country and the world as an essential part of any functioning democracy. That’s why we launched Report for America nearly five years ago, and why we launched Report for the World last year. Indeed, the crisis is both global and local. Anywhere in the world where journalism is in crisis, we see democracy in recession.

We highlighted this theme in our award-winning international reporting project titled Democracy Undone featuring reporting  from Brazil, India, Hungary and beyond. The project included “The Authoritarian’s Playbook,” to try to understand what seems to be a concerted and coordinated effort by authoritarian regimes to attack journalists and to sell fear as a way to tighten their grip on power.

In the United States, we have also supported work on this theme in recent years, including a powerful reporting project in 2020 titled “The Center Cannot Hold” which featured the work of photographer Seth Herald who has covered the Michigan militias and their assault on the statehouse in Lansing, Michigan which many saw as an event that emboldened many of the forces that came together on Jan. 6 in D.C.

Strong local journalism can also give us an early warning of the threats to democracy. One of our Report for America corps members, Chris Jones, saw the rise of extremist groups in rural America long before the Capitol insurrection, and he stepped into a role at our host newsroom 100 Days in Appalachia, doing extraordinary work covering those groups and their increasing influence in the region. As a veteran of the U.S. Marine Corps in Afghanistan, he was well trained to cover the story of militant extremism and his reporting journey led him to the steps of the Capitol a year ago this week, where he did some brave and insightful reporting.

This week, Jones was featured in an Editor & Publisher piece that highlights the need for more reporting on extremism in America as well as the importance of doing it in a responsible manner: ““As a newsroom, you have to be comfortable with the reality that there are people who are born and raised in the United States who want to overthrow democracy with violence. You have to be willing to say that there are people in your community who are insurgents. We use the word ‘extremism’ because we’re all scared to use the right word, which is ‘insurgency.’ … An insurgent is somebody who is going to use terrorism for political pressure, who uses public displays for a political goal. As journalists, you have to accept that you are on the front lines, covering something violent and dangerous,” said Jones in the interview.

Jones condensed his experience into valuable advice last year in a column for 100 Days in Appalachia, where he warned about the pitfalls of normalizing the militants’ actions: “Extremist groups will go to great lengths to depict themselves as reflecting the ideals of their community, or describe themselves as simply ‘concerned citizens,’ but this is a deliberate tactic used to normalize their behavior,” Jones explained.

This can lead to what he characterizes as “false equivalence,” which can create narratives that only further the militants’ messaging: “This year, ‘Antifa’ and various far-right groups, like the Proud Boys, the Oath Keepers and others were often described as oppositional forces who violently acted out their political affiliations in the streets across the country,” Jones explained in his column. “This helped create a false idea that armed right-wing groups who showed up to protests or other public events were justified in their need to defend themselves and their community from violent far-left activists.”

Jones’ advice is key to providing the public with a comprehensive picture of the aims and tactics of extremists. Through it all, Jones has relentlessly approached his beat as a local reporter, and he believes that this kind of approach is critically important if we are going to increase our understanding of the threat and how best to confront it.

“They plan and have training events in secret, but then they come out with these very media-oriented public-facing events, and that’s what gets covered. So what’s being reinforced is that no one pays attention unless they show up on Main Street with a bunch of rifles. That’s such a dangerous feedback loop to have with armed insurgents in America,” he warned.