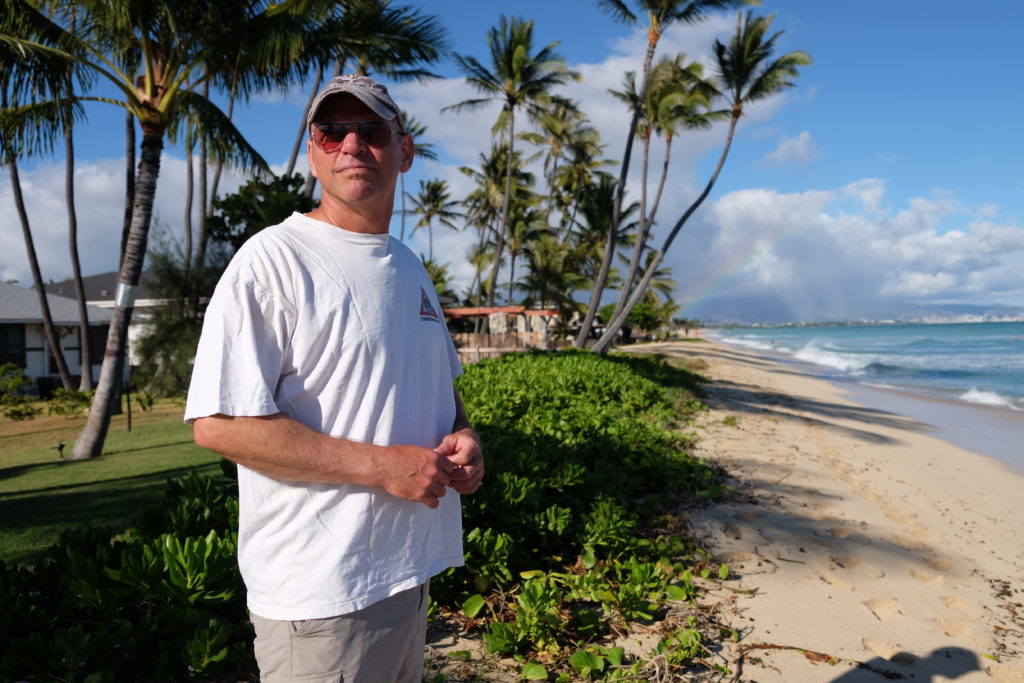 Navy Veteran Mike Plowman stands at the edge of the water at his home on Ewa Beach. (Photo by Kevin Knodell/GroundTruth)

HONOLULU — Navy veteran Mike Plowman, 55, surfs nearly every morning. His home looks out on the vast Pacific Ocean from the seaside community of Ewa Beach, an idyllic sandy beach shaded with palm trees on Oahu’s southeastern shore. Many of the people who surf, swim and fish along the sands throughout the day have roots going back generations.

“It’s where I caught my first wave,” said Plowman, who first moved to Ewa Beach as a toddler when his career-Navy father was stationed in Hawaii. Back then, as Plowman remembers it, Ewa was a working class community of farmers and military service members.

The relationship between the military and locals in Hawaii has long been a complicated one. Pacific Islanders, including Hawaiians, have a long history of military service — a 2003 study of recruiting data found Pacific Islanders were over represented by 249%. But, given the U.S. military’s role in the overthrow of the Hawaiian monarchy, many locals see the military presence as an occupation; and there’s a growing sovereignty movement.

With his deep ties to the military, Plowman doesn’t fit the profile of local activists who usually clash with the military. But he has become one of the central figures leading the charge against a proposed project that he says threatens to destroy the beach, and the way of life for locals at Ewa.

State officials and local activists like Plowman argue that the proposal to protect the Marine Corps’ Pu’uloa Rifle Training Facility from coastal erosion — by building a retaining wall into the bedrock below the sand at the 137-acre shooting range — potentially threatens to hasten the erosion of Ewa beach.

Disagreements over the project come at a time when military spending has gained more prominence as an important pillar of Hawaii’s economy, especially after the pandemic wiped out the island’s tourism industry. There are about 43,000 active duty troops, 60,000 military dependents, 9,600 National Guardsmen and reservists and 20,000 civilian defense workers across Hawaii according to state data.

Still, the project has united an unlikely mix of veterans, environmentalists and Native Hawaiian activists in their opposition. Last year, Plowman collected 800 signatures for a petition urging Ewa’s neighborhood board to demand an environmental impact statement.

“I probably used the word tree huggers in a disparaging manner back in my 20s,” Plowman admitted. Now, he’s a member of the Surfrider Foundation, a non-profit dedicated to protecting beaches around the globe. “I never would have imagined that I would have found myself beating a drum on an environmental point.”

As his life became more and more tied to the water over the years, Plowman said, he’s become more passionate about protecting the environment.

Plowman enlisted in the Navy out of highschool and spent 15 of the 20 years of his service stationed in Hawaii, going back to Ewa whenever he could. Despite flaring tensions between servicemembers and locals elsewhere in Hawaii, he said Ewa always felt like home. “We all got along real well. We married, we were in each other’s weddings,” said Plowman. “That’s why I’m back here, because I made lifelong friends that were civilians.”

Something has changed, said Plowman, who’s become increasingly frustrated with the military’s approach to dealing with community members in Ewa.

“This is a community that has historically been very supportive of the military,” said Plowman. “And right now it doesn’t feel like that respect is appreciated.”

The range has been a fixture at Ewa Beach for over a century. Originally a Navy small arms range in the early 1900s, the Marine Corps took it over for pistol and rifle practice before expanding it further in 1934 and have periodically made additions. The Marines renovated the range in 2015 and saw a marked increase in shooting scores, which the Corps credited to the upgraded facility.

However, the construction of nine “T-head groins” — structures built to interrupt the water flow and limit the movement of sand — at nearby Iroquois Point Beach had stemmed erosion there but seemingly accelerated it at Pu’uloa. Military planners began to worry that the ocean’s pull on the sandy beach beneath would cause heavy erosion to the range itself.

At the time, most residents in Ewa knew nothing of these discussions. What they did notice was the increased noise coming from the range.

For decades, people in Ewa shrugged off the sound of gunfire; the range had always been there. But the Marines installed a new loudspeaker system in 2017 to assist with training. The Marines do safety checks at 6:00 AM and the sound carries down the beach.

“Everybody’s used to it, but when they bumped up that speaker, that changed things,” said Ewa resident Thomas Murray. “Six o’clock is a bit early to be on that speaker, and you can hear every little thing.”

Born and raised in Ewa, Murray lives in his childhood home across from Plowman’s house and regularly fishes from the shoreline behind Plowman’s yard. The two live over a mile from the range, but as the loudspeaker bellows down the beach they can hear the shooting scores called out for individual Marines. On some days they know what the Marines are eating for lunch.

Plowman said that the speaker is much louder than the shooting itself. Marine Corps Base Hawaii spokesman Capt. Eric Abrams said that the “speaker system is crucial for passing safety instructions prior to commencing firing for the day and for the Marines working on the firing line.” He added that the system is “currently operating at the lowest setting audible to the shooters.”

But Plowman argued that the Marines trained perfectly safely without the system for decades. “They don’t need it, this [is] about convenience,” he said.  It was while looking into the noise and other Marine Corps policies that Plowman stumbled upon documents for the planned shoreline project last October, only hours before an Ewa Neighborhood Board meeting.

When Plowman raised the issue at the meeting, it soon became clear that none of the attendees had any knowledge of the project — including the Marine Corps community liaison.

“This represents another death knell to our beaches,” Sam Lemmo, administrator of the Hawaii Office of Conservation and Coastal Lands told Honolulu Civil Beat last year. “Their action is to avoid inconvenience at the expense of the beach ecosystem.”

Critics of the proposal accused the Marine Corps of burying its legal notices in the Labor Day weekend print edition of the Honolulu Star-Advertiser in 2016 and 2019. “People out here don’t really read the newspaper every day,” said Murray. “If it wasn’t for Mike, I don’t think any of us would have known anything about it.”

A 2015 study commissioned by the Marine Corps itself, which Plowman obtained through the Freedom of Information Act, noted that projects like the proposed seawall are “designed to prevent retreat of the landward region they protect and do nothing to reduce erosion of the beach” and that “on sandy shorelines suffering long-term beach erosion, [these methods] will likely result in the loss of the sand beach.”

The 2015 erosion study also put forward an alternative “no action” plan that would focus consistent monitoring of the shoreline and “soft” mitigation efforts to protect the range in place of the retaining wall.

Scott Gier, another Navy veteran who lives next to the range, said the loss of the beach would be devastating. He lives in the childhood home that his U.S. Marine father built in 1947 after he returned from World War II. Gier’s father was killed in action in Korea, and his stepfather was a Marine who fought in World War II, Korea and Vietnam.

Plowman and Gier are quick to say they don’t blame the Marines training at the range but rather their superiors. They insist they merely want the Marines to train differently. Plowman notes that Marines who trained at that range went to fight at places like Iwo Jima, Chosin, Hue and Fallujah. “It’s not lost on me that this is where it happens,” he said.

But Plowman said he worries that the military is playing a “waiting game” with the community and will move to install the wall once attention has moved elsewhere.

Kevin Knodell covers the military and veterans issues in Hawaii and the greater Pacific for Honolulu Civil Beat. This dispatch is part of a series called “On the Ground” with Report for America, an initiative of The GroundTruth Project. Follow him on Twitter: @KJKnodell.