ON THE GROUND IN MODESTO, CA 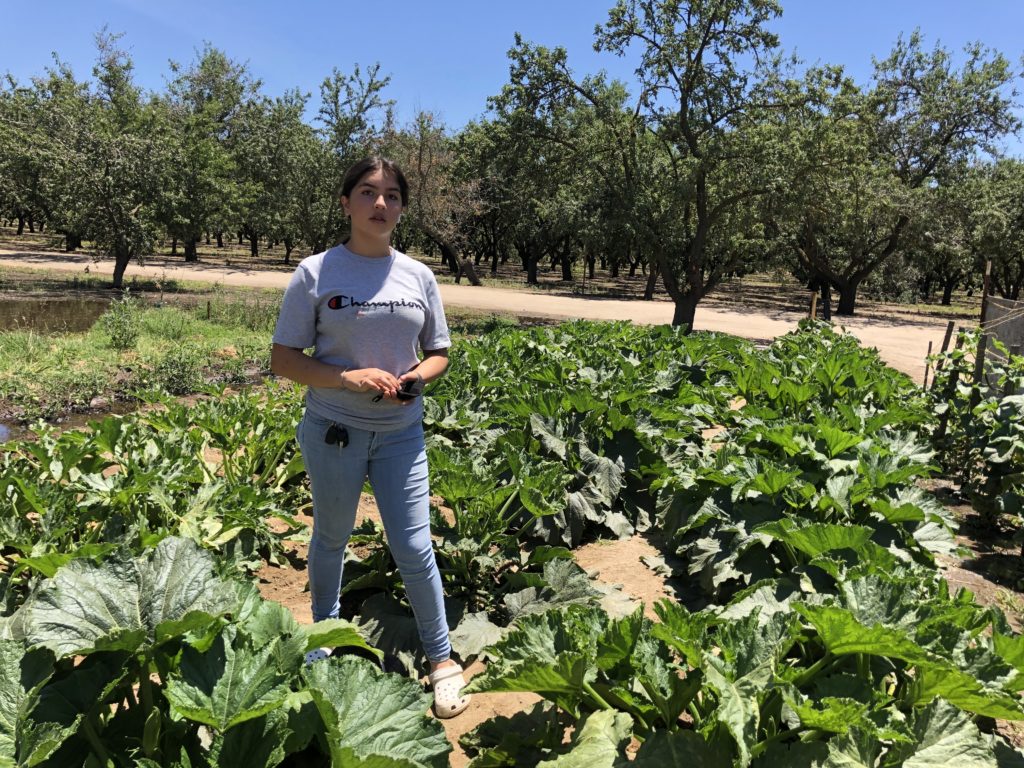 Alani Magaña, 14, tends the fields adjacent to her family’s farm stand, as she does each day. She is one of nearly 500,000 kids working in agriculture nationwide, including on family farms, according to estimates by the United States General Accounting Office. (Photo by ChrisAnna Mink/Modesto Bee)

MODESTO, Calif. – Alani Magaña looks, acts and talks like a typical Stanislaus County 14-year-old because she is one: a farm kid in a city of almond groves, fruit trees and vegetable crops in California’s Central Valley.

Magaña, with mocha skin, doe-brown eyes and thick chestnut brown hair, is by any standard a rare beauty. But she’s also one of the majority in California, where Latinos make up 52% of kids younger than 18. In Stanislaus County, home to almost 150,000 kids 18 or under, more than 40% have at least one foreign-born parent. Although the number of youth living in farm families is unknown, it’s likely high, as 1 out of 8 jobs in the county are agriculture-related.

Magaña is the embodiment of these oft-ignored figures, the antithesis of the surfing, carefree state stereotype: she lives and works on a 24-acre farm with her immigrant grandparents. Spring, summer and fall, she is up by 6:30 a.m. preparing for work in the family’s fruit stand, Rancho de Frutas, a small road-side structure that is part wooden shack and part aluminum roofing, hobbled together to serve up the produce from their adjacent fields.

When school’s out, she often works 12-hour days, and picks up extra jobs on the weekends to earn cash, which she stashes away.

“I stress a lot about my future,” said Magaña, “I want a good future, so I can have a stable life.”

Federal regulations allow children of any age to work on farms owned or operated by a parent or parent stand-in, and the United States General Accounting Office estimates that nearly 500,000 kids work in agriculture nationwide, including on family farms.

Magaña coddles the fruit and vegetables like a cat to her kittens, giving delicate peaches and strawberries extra care, and tending equally to her customers. By only their greeting, she knows to address them in English or Spanish. She prides herself on being good at math, and makes change without a calculator.

Magaña is being raised by her maternal abuelo, or grandfather, Miguel Magaña, and his wife of 25 years, Elvira Rios, who helped raise his five adult children. “And I’m the sixth,” the teenager chimed.

No one knows, or at least will tell, what happened to her biological mother, whom Magaña has never met. She has been with her grandparents since she was three days old.

“I took care of all of the children and grandchildren, but Alani was like taking care of two, not one,” said Rios, laughing. Magaña and Rios primarily speak Spanish, and without prompts, Magaña assumes the role of interpreter.

Rios describes Alani with warmth, as strong-willed and fearless.

“Since she was little, nothing ever seemed too difficult for her,” said Rios, “Whatever she wanted, she would persevere until she succeeded.”

Those attributes are still obvious in the young Magaña, who last year witnessed employees at a local Burger King mistreating a transient man and asked for the manager.

“The homeless man went into the store to get a drink, but the people (employees) made him throw his food away, I don’t know why,” Magaña recalled, “So, I talked to the manager and he made them give him another meal. He left happy.”

It may’ve been a sign of what’s to come. Magaña, driven by the sacrifices of her grandparents, hopes to become a social worker to help others, especially the homeless and immigrants, who she said deserve compassion.

The knowledge that her grandparents only completed third grade in Mexico, growing up very poor and working in the fields as children, fills her with gratitude.

“I guess you could say they’re living the American dream.”

In Stanislaus County, just four out of five students graduate from high school, and fewer than one in five go on to graduate from college. Despite humbly noting that she’s a good student, not a great student, she plans to beat those odds.

Though the pandemic made studying harder, distracting her with worry, Magaña is familiar with independent study. She is accustomed to completing the winter months of the school year in Tangancicuaro, a small pueblo in Mexico, with her grandparents and extended family.

Now beginning 10th grade, she plans to work less at the fruit stand, so she can focus more on school because she wants to go to college.

She hopes to attend San Diego State University, but doesn’t want to be apart from her grandparents for very long and plans to eventually live close to them.

ChrisAnna Mink covers health for the Modesto Bee. This dispatch is part of a series called “On the Ground” with Report for America, an initiative of The GroundTruth Project. Follow her on Twitter: @CMMink.