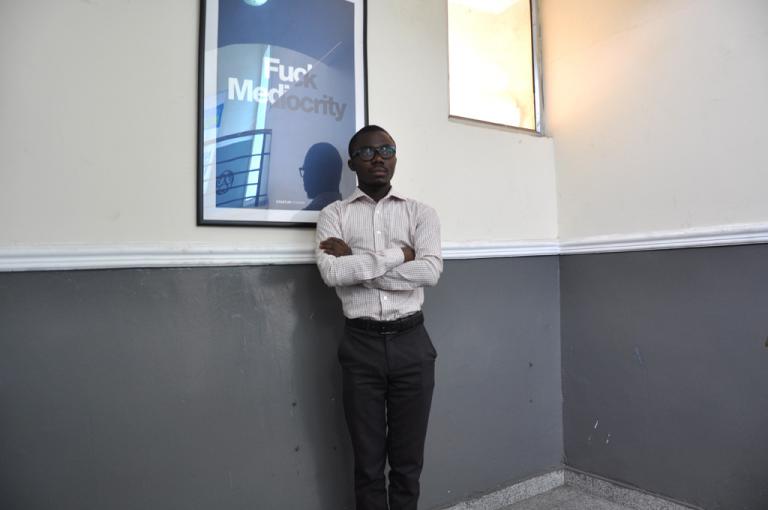 Two years ago, Tayo Olufuwa, known around Lagos as "Mr. Jobs," started Jobs in Nigeria, an online jobs listing service for unemployed professionals. The site now has over 200,000 users.

LAGOS, Nigeria — Tayo Olufuwa remembers the day he realized he could do anything.

He was a shy and studious 14-year-old, struggling with growing up in one of Lagos’s poorest and most dangerous neighborhoods without a father. A natural “computer geek,” Olufuwa, now 23, dreamt of “doing big things with technology.” But he instead spent his childhood frustrated, dodging gang violence and averting recruiters who wanted him to create more of Nigeria’s notorious 419 email scams.

His older sister sensed his restlessness and gave him a copy of “Gifted Hands” by Ben Carson. The book charts Carson’s heroic journey from a poor childhood in inner-city Detroit to his rise as the director of pediatric neurosurgery at Johns Hopkins Hospital at just 33.

“I just realized I could do something with my life,” he says, adjusting his black-rimmed glasses. “I could create solutions.”

Since then, he’s been jogging almost every morning at 6 a.m., inspired by the words of his idol, the late Apple Computer co-founder Steve Jobs: “If you live every day like your last, someday you’ll most certainly be right.”

Two years ago, fed up with the country’s woeful youth unemployment rate, Olufuwa started Jobs in Nigeria, an online jobs listing service for unemployed professionals. The site now has over 200,000 users seeking any advantage they can find in a country where an estimated 54 percent of people ages 15-35 are unemployed, according to the National Bureau for Statistics. The Central Bank of Nigeria reports the number at 80 percent. From pharmacies and fast-food joints to hotels and law firms, Olufuwa fields calls from employers looking to fill positions. His website also helps applicants craft cover letters and resumes.

These days, Olufuwa is known as “Mr. Jobs.”

“I was tired of young people like me and my friends not having a way out,” Olufuwa says, noting the nickname comes from his profession, not his idol. “There’s so much talent out there that needs to be discovered. We can’t wait any longer.”

In April, the world’s media turned their lens on Nigeria, sparked by the kidnapping of more than 270 schoolgirls. Four months have passed, and the girls are still missing. The lens is no longer there. But frustration has grown like a cancer.

The militant Islamist group known as Boko Haram has taken responsibility for the abductions, and the insurgent group’s leader shook Nigeria and shocked the world in threatening to sell the girls into slavery. The abductions catalyzed a global online call to action through the social media campaign #BringBackOurGirls, which has since fizzled as the prospect of a rescue grows increasingly dim.

Many have criticized Nigeria’s government for not doing enough. Police attempted to ban daily protests in the capital calling for a return of the schoolgirls, claiming the rallies were posing a serious security threat. Meanwhile, the militant group remains undeterred,orchestrating bombings in cities and taking over towns.

But for many, the tragic abductions are more of a red herring than the main plot.

“The abductions are only the tip of the iceberg,” said Olufuwa.

Last March, far from the buzz of social media, another horrific event in Nigeria went largely unnoticed, though it exposed Nigeria’s fragile core. A half-million people flocked to recruitment centers across the country to apply for fewer than 5,000 government positions. Pandemonium ensued and at least 16 Nigerians were killed in stampedes. Hundreds were injured.

The interior minister, whose office oversaw the recruitment, dismissed the fatal scramble and said the job seekers simply “lost their lives through their impatience.”

But for many observers, the incident marked a disturbing turning point. That is, that the unemployment situation in Nigeria — a bitter irony in a country with such vast oil wealth — seems to have literally turned deadly, with the government largely watching from the stands.

“The base is rotting, and people don’t have a chance,” said Kole A. Shettima, Director of the MacArthur Foundation’s Africa office in Abuja. “I’m not sure the government really handles anything, so it’s not a surprise they can’t handle youth unemployment.”

The stakes are high for Africa’s most populous country, one lodged between two fates: a nation mired in corruption, under attack by an Islamist insurgency and one brimming with potential and touted as an economic engine for the African continent.

With an estimated 170 million people, Nigeria is Africa’s largest oil producer. In April, its economy surpassed South Africa’s in size, making it the largest on the continent. But other numbers dictate a grimmer future.

More Nigerians are poor today than at independence in 1960, with over 60 percent below the poverty line. The literacy rate is around 60.8 percent and life expectancy hovers at 50. Nigeria scored 144 out of 177 on Transparency International’s 2013 Corruption Index and ranked 153 out of 187 countries in the UN Development Index. According to Nigeria’s National Bureau of Statistics, 54 percent of Nigerian youths were unemployed in 2012.

“In Nigeria, you have incompetence coupled with corruption,” says Shettima. “That’s the most dangerous mix you can possibly have.”

When Olufuwa had the idea to start Jobs in Nigeria, he worried it would evaporate into Lagos’ dense streets, as good intentions so often do here. He had no connections to the start-up world. He had no idea how to even begin.

“People like me with big ideas and a certain skill-set can change the country,” he says. “We just need to be incubated in the right environment.”

When he found out about Co-Creation Hub(CcHub), a rare space of innovation in Lagos, he knew he had a chance. CcHub is an early stage incubator, dedicated to accelerating start-up ideas like Jobs in Nigeria.

“There’s a paradox in Nigeria,” explains Femi Longe, director of programs at CcHub. “On the one hand, there’s huge youth unemployment. But on the other, there’s a supply of jobs you can’t fill because of a vast skills gap. We’re sitting on a time bomb.”

CcHub helps social entrepreneurial start-ups like Olufuwa’s find funding and mentoring. Other start-ups on their docket include BudgIt, an initiative to get citizens involved in public finance and WeCyclers, dedicated to incentive-based recycling in low-income neighborhoods.

“In Nigeria, entrepreneurship is often not a choice,” says Longe. “It’s sometimes what you have to do.”

In journalist Dayo Olopade’s new book “The Bright Continent: Breaking Rules and Making Change in Modern Africa,” she argues that progress in Africa lies in innovative solutions Africans are constructing for themselves, often due to the failure of western development communities and government institutions. She writes about this specific creativity — born from difficulty — a characteristic she calls “Kanju,” which makes people like Olufuwa natural entrepreneurs.

“If necessity is the mother of invention, Africa’s adversities are the mother of necessity,” she writes. “All that is a fancy way of saying that a general history of colonialism, dictatorship, and poverty has left Africans with a pretty good recipe for lemonade.”

In the last few years, the Nigerian government has tried to tap into their country’s “Kanju” lemonade and the Silicon Valley-fueled buzz of entrepreneurship, creating programs like YouWin, a business plan competition for young entrepreneurs. But in an environment rife with bureaucracy and corruption, few are banking on the government to meaningfully cultivate the ecosystem.

“Entrepreneurship is a process, not a sound-bite,” says Elmira Bayrasli, author of the upcoming book “Steve Jobs Lives in Pakistan: Extraordinary Entrepreneurs in the Developing World.”

“The Nigerian government has to do more than merely champion entrepreneurship on paper or at a ribbon cutting ceremony,” she says. “It must strengthen the rule of law, improve infrastructure, clamp down on corruption, increase transparency, and pour resources into education.”

Godbless Otubure, 26, is head of the internship program at Ignite Lagos, a governmental initiative that offers leadership training to recent college graduates. The program has trained 900 youth since 2012. The demand is overwhelming: they receive around 1,800 applications each cycle for 100 slots.

Making unemployed college graduates more marketable is an uphill battle, Otubure says, blaming a deplorable public school system as the neglected root of the problem. Recent statistics from UNICEF reveal that Nigeria has an estimated 10.3 million out-of-school children, the highest rate in the world.

“We lack maintenance control in Nigeria,” he says. “At some point, you have to fix the root.”

Hamzat Lawal, a 24-year-old Abuja-based social entrepreneur who has led campaigns like Follow the Money, an initiative that works to expose corruption of the government, says government programs like Ignite and YouWin are mere window dressings for a rusty pipeline.

“Seventy percent of the time I blame unemployment on the government,” he says. “But we also have to blame ourselves, because we’re the ones empowering these politicians through our votes, through accepting the status quo.”

At the University of Abuja, the city’s largest federal university, students stand around listlessly, many bereft of plans for life after graduation. On most days, Peter Maidoki, the director of the university’s entrepreneurship program, sits in his dark office grading papers for his Entrepreneurship 101 course.

The first question on a recent exam read “What is entrepreneurship?” One student simply responded, “having a dream.”

Peter Maidoki is the head of The new #Entrepreneurship program at the University of Abuja in #Nigeria (the most populous country in #Africa, with around 168 million). He just finished grading a stack of exams and can’t stop shaking his head. “These young students are afraid to dream — they’re afraid of innovation. They don’t think they can build up their own lives,” he says. “But who can blame them when this country is so impossible?”

But that might not be enough in Nigeria, Maidoki concedes.

“There needs to be an enlightenment,” he says. “Corruption and vast wealth have messed up people’s perceptions of success. It’s given them illusions. They don’t want to build their own lives… in Nigerian youth, there’s entitlement mixed with a sense of failure before they start.”

Still, Maidoki says, it’s difficult providing a cushion for students when the center doesn’t have any money or connections to the private sector. For the past six years, he says he’s been appealing to the school and government for more funding for the center, but to no avail.

“These young students are afraid to dream,” he says. “But who can blame them when this country is so impossible?”

For students like 23-year-old Victor Adanu, entrepreneurship is too risky of a concept — and dreaming is a luxury he can’t afford. Adanu graduated in May, a year behind schedule due to a nearly six-month halt in studies during nationwide teacher strikes.

“I’m just trying to find a place,” he said. “But it’s difficult… I don’t have much guidance, just passion.”

From a young age, Adanu says he liked taking things apart and putting them back together. He wanted to study mechanical engineering, but there wasn’t enough room for him in University of Abuja’s program, so he settled on physics. He hopes to find a job as an electrician at a “big company” but he’s become apathetic, resigned that he’ll probably end up working at a call center to make ends meet.

“Nigerians are always hustling…we always find a way to make things work,” Adanu says, walking around the university’s brown lackluster campus. “But we don’t always know where to start.”

Back down in Lagos, Olufuwa taps away at CcHub, hoping students like Adanu can get a chance through his website — a shot at a life they deserve.

“Being Nigerian means you’re a fighter,” says Olufuwa, ending a 12-hour workday before heading back to the rough neighborhood that made him one. 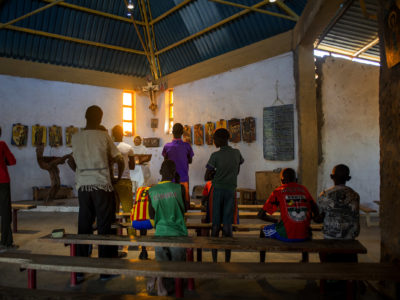