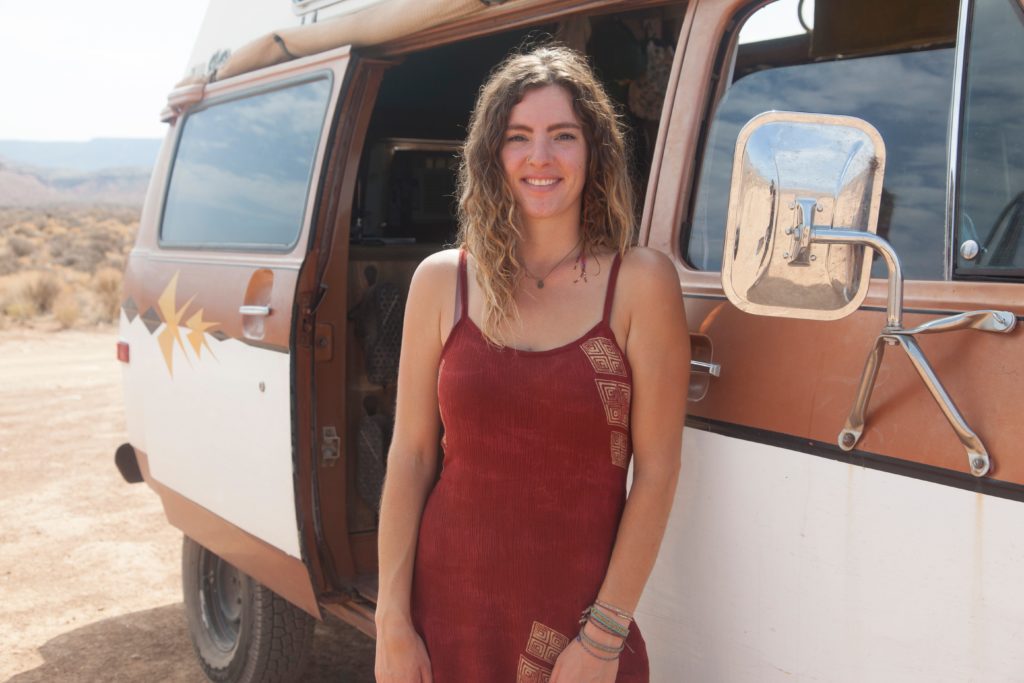 (Photo by Chris Caldwell / The Spectrum)

SPRINGDALE, Utah — Just outside Zion National Park, a community of local tourism industry workers is forced to live off the land, homeless.

While millions of tourists annually push through the gateway town of Springdale, Utah, at the mouth of the nation’s third most popular national park, businesses can barely find, let alone keep, employees, even during a pandemic-prompted tourism boom, as millions of Americans escaped “COVID cabin fever.”

The problem, as in many other gateway communities across the country, is a severe lack of housing that workers can afford.

Ashley Gathman, a 28-year-old server at the popular Bit and Spur restaurant in Springdale, lives in a 1976 orange and white El Dorado van that blends in with the scorching rust-colored Bureau of Land Management land on which she camps.

Equipped with only a bed, a small kitchenette, and an unplugged window air conditioning unit, Gathman has been living the van life for four years, mostly owing to the lack of affordable housing in the town.

Employees who support the tourism industry hold one out of every seven jobs in Utah’s Washington County, and more than 60% of jobs in Springdale, but many cannot afford what little housing might be available in the three mile–long, one mile–wide town where they work, no matter what they’re paid.

“We’ve had several from outside of the area who have wanted to come and work for us. They were excited about the opportunity, and it ended up not working out because housing was so difficult to find or even impossible to find,” said Nate Wells, president of the Zion Canyon Visitors Bureau, the town’s chamber of commerce.

During a nationwide labor shortage, small and previously secluded gateway towns across the country are feeling the pressure to provide more workers as national parks experience a record-breaking number of tourists.

Parks and gateway towns everywhere have reported a drastic increase in vandalism, litter, resource damage, and conflict among staff, locals, and visitors since the tourism boom started a year ago.

Four out of Utah’s five national parks—Arches, Canyonlands, Capitol Reef, and Zion—broke records for the most visitors ever recorded in a single month this June, putting pressure on towns that have never hosted that many people in such a short time.

Because of this, Arches had to temporarily delay entry for months this year, unable to accommodate the masses of crowds and cars.

Overcrowding is a problem in parks across the country that has caught the attention of national leaders, with legislators on the U.S. Senate Committee on Energy and Natural Resources meeting this summer to question national park officials about overtourism and its effects.

Federal park officials said they were happy with how Zion and the local community are handling visitation. From mandating shuttle tickets during the early pandemic to an initiative to distribute more visitors to the east entrance, officials said in the July meeting that Zion could be a model for other parks.

“We’re pretty excited about the conversations happening in and around Zion,” National Park Service regional director Michael Reynolds said. “Superintendent [Jeff] Bradybaugh and his very good team are really innovative about how to handle those visitors without a lot of problems and are leading the way along with the partners in that community.”

However, employers on the ground in Springdale are at a loss when it comes to balancing the promise of tourism profits while retaining employees who can’t find a place to live, even with starting wages at new highs.

“You know, employers aren’t in the business of being charitable organizations. They want to make a profit,” said Lecia Langston, regional economist for the Utah Department of Workforce Services, referring to how businesses can’t keep paying higher wages even if that’s seen as the solution to the affordability problem.

The booming economy is precisely what is putting the area’s housing market out of reach for workers.

The market value of the land outside the park is worth anywhere from $250,000 to $2 million per acre because of its proximity to the national park. Add in the cost to build in a remote area with COVID-caused delays in the global supply chain, and the price skyrockets.

“Lumber [cost] has increased fourfold in 2020, and this has further [exacerbated] the gap between housing costs and what a median income–earning household can afford,” a 2020 Springdale housing strategy report by Zions Public Finance noted.

Lumber costs hit an all-time high this May, spiking at 300% above pre-pandemic prices, and they remain high nationally.

Employees also feel pushed out by the rooted residents of Springdale who don’t want high-density housing and have fought the migration of newly remote workers who are able to pay top dollar for available local homes.

“We’ve now had an influx of people with massive resources coming into this little tiny county offering $150,000 above asking price and paying cash,” said Tai Christensen, chief diversity officer at Utah-based CBC Mortgage, who also noted that these outsiders are pricing out local community members.

With the pandemic eliminating a commute for a lot of knowledge workers, many more will look for lower-cost housing away from employment centers, according to a recent study from Harvard University.

A significant portion of the available housing stock has also been repurposed as short-term rentals on Airbnb and similar services.

The number of short-term rental units in the county jumped around 141%, from about 1,300 in 2017 to more than 3,000 this year, according to an estimate from the University of Utah’s Kem C. Gardner Policy Institute.

And they are priced out of reach for new workers trying to move into these towns. The Gardner Policy Institute estimates that the monthly wage for leisure and hospitality employees in Washington County is only $1,572, just over $9 an hour or nearly $20,000 annually.

But while housing might be cheaper farther away, the added cost of commuting takes a toll on low-income workers.

“The majority of jobs available in Springdale are tourism-oriented service sector jobs, which makes it even more difficult to find adequate housing that’s affordable for people who are employed in those jobs,” Springdale director of community development Tom Dansie said.

But with scarce local housing, more than 1,000 workers commute into Springdale on a daily basis, according to the housing strategy report.

“If all the people who live and work in Springdale at the end of their shift go home, they’re less invested in the community,” Dansie said about the trend in workers having to commute to houses farther away. “We don’t want high-density housing; we don’t want a lot of apartments; we don’t want to feel urban and crammed and dense and developed.”

Bruce Jenkins, a local attorney who specializes in landlord-tenant law and construction defects, has seen the current housing crisis come to a boil.

After decades of litigation around housing issues, Jenkins said that building up is the only way to preserve Utah’s public lands, which make up two-thirds of the state.

“We can’t sprawl much longer,” he said. “Where is the workforce going to live? They’re going to be pushed farther out, farther away, and have to drive farther to come into work.”

The state has focused heavily on statewide homelessness, with the governor signing state legislation creating the Utah Office of Homelessness and allowing cities to donate property for affordable housing units in March. The chambers of commerce and the county are pushing for more government involvement to help temper the housing crisis, but government officials said there are limited options for intervention at this point.

“We’re doing as much as we can. There’s only so much the state can do,” Utah Gov. Spencer Cox said.

But locals said they hear a lot of blame-shifting for the housing crisis. Now is the time to come together to find a solution, they noted.

“There was a lot of irony behind that,” Frankenburg said. “I cared a lot about that community, and it was really hard to see maybe some people that didn’t care enough.”