Why Iranian youth are endorsing the nuclear agreement 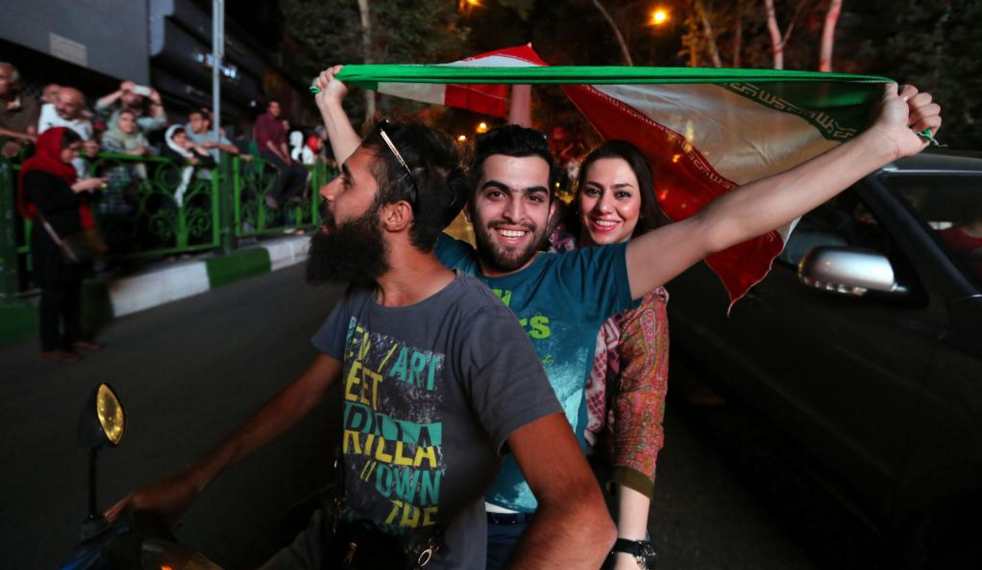 TEHRAN, Iran — Medical students hang out in front of the University of Tehran one stifling summer day, chatting and checking their smartphones. Asked about the nuclear agreement that had recently been signed in Vienna, they quickly offer opinions about a deal that could dramatically shape their lives.

Iman Adeli, a 21-year-old future doctor, says Iran has long been isolated because of international sanctions.

“We were alone and at war with the world,” Adeli says. “If the sanctions are lifted, trade will come back. We’ll import and export more easily compared to the time of sanctions.”

The handsome young man dressed in jeans and a T-shirt, like many Iranian young people, is an avid user of an Iranian messaging service called Telegram. The app kept students appraised of progress with negotiations in Vienna. The nuclear agreement, signed in July and awaiting the approval of US Congress, requires Iran to sharply reduce production of nuclear material and adhere to stringent inspections of its nuclear power program. In return the UN will lift economic sanctions, although the US will continue unilateral sanctions in an ongoing dispute over Iranian human rights violations and support for terrorism.

Thousands of young people spontaneously rallied on the streets of Tehran in support of the Vienna agreement, formally known as the Joint Comprehensive Plan of Action (JCOPA), in July. “It’s a great event, and people have the right to be happy about it,” said Adeli.

Some young participants used the opportunity to hold up pictures of Mir-Hossein Mousavi and Mehdi Karoubi, two 2009 presidential candidates who have been under house arrest for four years due to their opposition to the government. Police dispersed those demonstrators, fearing they could spark wider protests.

Young Iranians have been at the forefront of support for the accords because they are among the hardest hit by sanctions. Banks wouldn’t transfer funds from Iran, so some students were stranded abroad. Many youth also hope the accords, by lessening tensions with the West, will lead to greater domestic reform. Whether at spontaneous rallies or on social media, young Iranians are impacting Iran’s politics in ways not seen for years.

Students and youth have long played an important role in Iranian politics. In the 1970s they helped lead the struggle against dictator Shah Reza Pahlavi. They joined the 1979 revolution, which brought the Islamic government to power, and they fought in the brutal Iran-Iraq War of 1980-88.

But young people today only read about those struggles in history books. Iran experienced a baby boom from 1985-95. So 41 percent of Iran’s population of 81 million is under 25.

The baby boomers came of age during the 2009 Green Movement when millions of Iranians poured into the streets to protest fraudulent elections and call for major societal change. The government brutally cracked down on the protesters, but the demonstrations lasted for months. The government jailed leaders and ultimately prevailed.

Ironically, in the intervening years, Iran has also become victim to its own success in making higher education more widely available to ordinary people. Students can attend traditional public universities, private universities, part-time colleges and take a wide array of online courses. Today over half of Iranians between the ages of 18-24 attend some form of higher education. The government wants to expand that to 60 percent by 2025.

The surplus of over qualified graduates “is a serious problem,” said Foad Izadi, an associate professor at the University of Tehran. Iranian students attend college with government subsidies, and then can’t find work, he said. “We actually have more college grads than we need.

Some take jobs that don’t require a college education. Others join the informal economy driving their own cars as unofficial taxis. Some others act as middlemen in the sale of homes or cars.

The unemployment crisis has led some students to join the newly invigorated reform movement. They want to keep the current Islamic system but improve it through gradual change, says Javad Etaat, an associate professor of political science at Beheshti University, who has written a number of academic papers on Iranian youth.

“Right now no one believes in the need for another revolution,” he said. “When you make a revolution, you don’t need another one right away. Those who protest are looking for reform.”

Reformists seek an end to tight religious controls on daily life and freedom to criticize the government. They want the authorities to focus on improving the domestic economy rather than spending money to aide Lebanese Hezbollah or Bashar al-Assad in Syria. While opposing US aggression in the region, they want to see friendlier relations with the West.

After years of quiescence, the reformist movement surged in 2013. The entire country had come to oppose the disastrous policies of right-wing populist President Mahmoud Ahmadinejad, who held office from 2005-2013. Under his administration the economy collapsed, with inflation hitting 40 percent and GDP shrinking by over 7  percent in 2012. Iran also faced international isolation because of Ahmadinejad’s Holocaust denial and harsh repression of political opposition.

In 2013 that popular discontent boiled over when Iranians, including large numbers of young people, voted for President Hassan Rouhani. While Rouhani is not part of the reformist camp, he won the election with strong reformist support.

And now young people have been energized by the signing of the JCOPA. A large group of human rights and pro-democracy activists have announced their support. Some, including one political prisoner still in jail, posted messages of support on YouTube.

“The majority of the reform movement is young people,” said Prof. Etaat. “The principalists (conservatives) tend to be older people.”

The conservatives are known as principalists because they stand by the principles of the Iranian Revolution. They back crackdowns against dissent, and support the Revolutionary Guard and its sometimes violent militia known as the Basij.

Principalists also call for continued military support for Hezbollah, the Syrian government and Shia militia groups in Iraq. They remain suspicious of the US and the West in general.

Conservatives have some support among the youth. Ruhollah Hosseinian, a leading principalist member of the Iranian parliament, says young people don’t trust the US to live up to its commitments under the JCOPA. The US could falsely claim that nuclear research is taking place at a military base, for example, and if Iran refuses to allow inspections, sanctions could be re-imposed.

“It’s like a hammer above our head,” said Hosseinian.

He says many young people support the conservative viewpoint as seen by their devotion to Shia Islam. “After the revolution, a huge number of youth went towards religion,” he said. “Before the revolution at the University of Tehran mosque, you would see only a handful of students praying. Nowadays they hold prayers in two sessions because it gets so full.”

Etaat concedes that some youth support the principalists. But he emphasizes that religious practice doesn’t necessarily mean support for the conservative cause.

“We have young people who are very religious right now,” he said. “Religion runs deep in Iran because of the culture. It’s their own personal belief, and it’s not related to politics.”

Both reformist and conservative youth do share one thing in common, however: using social media to promote their views.

Drivers honk their horns in a futile effort to get through the crowded street where the gaggle of medical students are still standing. They eagerly discuss the latest social media fads. The US has Twitter, Facebook and WhatsApp, they say, but Iran has Telegram. It’s a messaging application that allows computer and smartphone users to quickly send text and photos.

The Internet can be very slow in Iran due to technological problems and because the government impedes access to sites critical of the regime. “Telegram is the most popular app because it’s very fast,” said Mehrdad Barati, a 24-year-old medical student.

Most young people use Telegram to exchange photos, jokes and text messages. “I use it to contact my girlfriend, of course,” said Barati with a laugh. “And she answers right back.”

Telegram usage has upended Iranian life, according to Mehrdad Khadir, editor of the Omid Javan (Hope of the Youth) weekly magazine.

Khadir points out that while wealthy Iranians can afford to buy a smuggled iPhone 6, which costs about $700, working class Iranians have access to a no-frills Chinese Huawei smart phone for only $80.

Everyone can have one, he said, “from the boss to the lowest employee.”

Indeed, according to one academic study, 45 percent of Iranians go online, making them by far the highest per capita users in the Middle East. By comparison Saudi Arabia ranks second with 18 percent.

Based on his studies and personal observation, Prof. Etaat estimates that 70-80 percent of Telegram content deals with personal issues or activities not hostile to the government. For example, young people will use social media to organize for religious festivals.

“Perhaps 20 percent are against the system,” he said. “Some of them protest how the country is ruled. Some undermine the whole structure of the system.”

The government tries hard to block such use of the Internet. Parliament member Hosseinian justifies the censorship by blaming foreign powers. He says the US and Britain constantly try to undermine Iran’s government through the Internet, as well as foreign broadcasts on TV and radio.

As recently as 2013 government censors blocked many websites. A Google search in English, for example, would produce a list of links but none were accessible. Many more sites became available over the past two years under the Rouhani administration, according to experts.

These days magazine editor Khadir has no problem accessing Google. But news and political sites deemed hostile to the government are still blocked. That includes BBC Persian and Green Movement sites produced abroad, among others.

To get around government censorship, many young people buy access to black market Virtual Private Networks (VPN). They log onto a website that connects them to foreign servers beyond the reach of Iranian censors. They can then access any website. But then the government blocks the VPNs, only to have new ones quickly emerge. The cat-and-mouse game continues on a daily basis, becoming a profitable enterprise for people selling the VPNs.

Prof. Izadi says the government censorship is sometimes clumsy. “The people doing the filtering, some of them don’t speak English,” he said.

“They see a picture they don’t like and they filter it. They don’t realize the content may be of use to some people.”

Most young people would like to see Internet access opened far wider. “If it were up to me,” said Prof. Etaat, reflecting the views of his students, “I would make the Internet much faster to make it easier to use social media. But it’s up to the government. Even a reformist government would want to keep social media in line with its own beliefs.”

Taking a long term view, Etaat notes the progress made in Iran since the 1979 revolution. “Iran has changed a lot,” he said. “Before the revolution, the religious people wouldn’t even watch TV. Now, according to our statistics, the use of social media in Iran is equal to that in the West.”

GroundTruth Special Correspondent Reese Erlich received a grant from the Pulitzer Center on Crisis Reporting for his Iran coverage. His latest book is “Inside Syria: The Back Story of Their Civil War and What the World Can Expect.”