Why Fisherfolk Are Protesting Against Adani’s Vizhinjam Port in Kerala 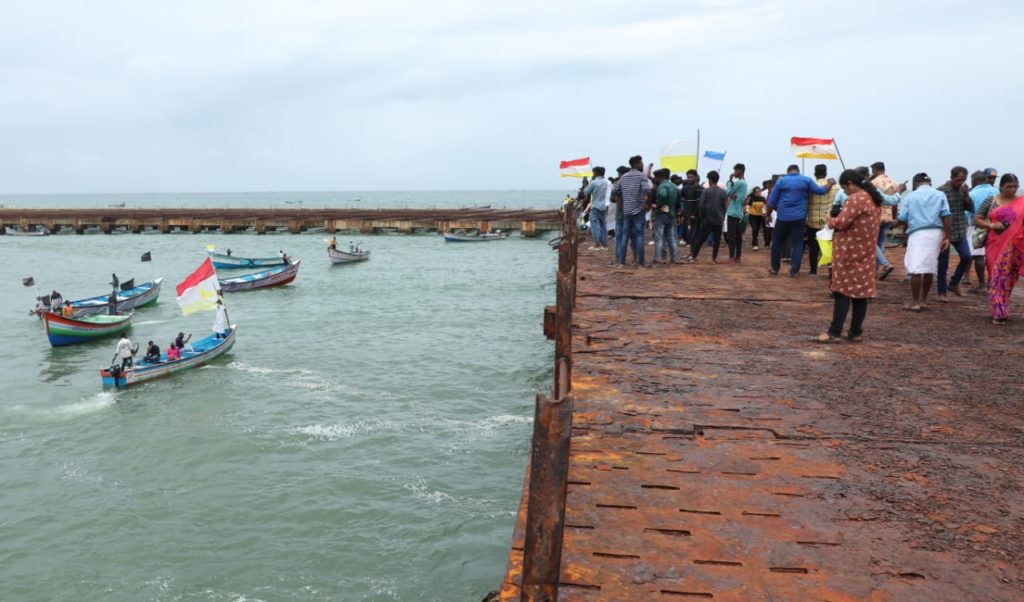 Fishermen also took to the sea in their boats to voice their protests against the port project. (Photo by: arrangement)

Kochi: On August 23, fisherfolk marked the eighth day of protests against the Adani Group’s upcoming Vizhinjam Port near Thiruvananthapuram, Kerala, by continuing their day and night sit-in at the entrance of the Port in the village of Mulloor. People forded the barricades at the gates, took out marches and burnt an effigy of Gautam Adani; other fisherfolk, meanwhile, took their protests to the sea in their small fishing boats. They reinstated their demands – the main one being that the state stops the Vizhinjam Port project due to the coastal erosion and loss of livelihoods it is causing.

Kerala chief minister Pinarayi Vijayan claimed that it was a pre-planned protest, while responding to an adjournment motion in the state Legislative Assembly on Tuesday. It is not just fisherfolk who are taking part in the protest, he said. While the state will ensure that fisherfolks’ livelihoods or homes are not affected, it will not concede to the demand to stop the project, he added.

“Stopping the Vizhinjam Port project cannot be considered at this point. There will be problems. Such problems in such projects are but natural. What actions are taken to address them is what matters,” Vijayan said. Stopping the project will be an “injustice” to the future generations, Vijayan said.

However, the price that coastal fishing communities could pay for the project could be high. Protests against the project gained momentum – and further intensified over the last month – when coastal communities realised the social and environmental costs that the project is beginning to, and will continue to, extract.

What is the Vizhinjam Port project?

According to the Adani Group, which won the concession agreement for the development and operation of the port in August 2015, the Vizhinjam Port will be India’s first “mega transshipment container terminal”. The project, being implemented at a cost of Rs 7,500 crore, involves constructing the container terminal at Vizhinjam, a coastal town that lies around 20 km south of Kerala’s capital Thiruvananthapuram.

It will be developed in three phases. The capacity of the first phase alone will be 1 million TEU (or twenty-foot equivalent units, a measure of how many twenty-foot long containers can be berthed at the port at one time); in subsequent phases, another 6.2 million TEUs can be added. (For comparison, the Chennai Port’s capacity in 2016-17 was around 1.5 million TEU.) A total of 450 hectares of land will be used for the construction of the Vizhinjam Port, and this will include reclaiming more than 120 hectares of ocean and dredging the seabed as well.

Though the project received environmental clearance and clearance under the Coastal Regulation Zone Notification 2011 and construction of the port began in December 2015, it has faced numerous delays.

One of the main concerns that local communities as well as activists and scientists have raised for some time is the coastal erosion that has occurred since work on the port began in 2015-16.

The ongoing construction of breakwaters has altered the direction of sea currents, causing coastal erosion across the entire coast of the project area. Experts have noted that the Environment Impact Assessment for the project did not address the issue of coastal erosion adequately. The city of Thiruvananthapuram has lost its famed Shanghumukham beach entirely to sea erosion over the last few years. In fishing villages including Valiyathura and Muttathara, around 600 people have already been shifted to relief camps after their houses were lost to sea erosion, reported Mongabay-India. They are demanding a fair compensation package, as they continue to live in relief camps.

Fisherfolk are also losing access to beaches, and their livelihoods are at risk as well. The more turbulent sea now endangers the lives of fishermen as well, who are unable to manoeuvre their crafts due to the rough sea. Accidents have become more frequent and three fishermen lost their lives last year due to the turbulence in the sea, said A.J. Vijayan, an activist and member of the NGO Coastal Watch, who has been opposing the project since its inception.

‘Best time to stop the project is now’

On August 23, ports minister Ahammad Devarkovil said in the proceedings of the State Legislative Assembly that stopping the Vizhinjam project at this stage would translate into huge financial losses to the state government because it has already undertaken a lot of work.

However, there is still a lot of construction and other related activities for the port that is yet to be done, said Vijayan. According to him, only less than 40% of the dredging and reclamation work as part of the project has been completed by the Adani Group. Similarly, only less than half of the berth construction – involving piling in the sea to build a platform to berth ships – has been completed, he claimed.

Moreover, the Kerala state government is in charge of building the breakwaters (permanent structures constructed along the coast to protect vessels in the port from tides, currents, waves, or storm surges), added Vijayan. This can be paused by the state easily, he said.

According to the proposal, the breakwaters will be constructed perpendicular to the coast for a distance of 3.2 km. Only 1 km of this has been completed, near the shallow depths of the coasts, said Vijayan. Completing the construction will require more stones, and mining from quarries could have an additional environmental and ecological impact on the state.

For example, in May this year, the National Board for Wild Life – which has to grant clearances for non-forest activities in protected areas – permitted the Adani Vizhinjam Port Private Limited to quarry granite. Its decision, based on the recommendations of the State Board for Wild Life and the Government of Kerala, will allow quarrying in almost 2 hectares of land that falls within the eco-sensitive zones of the Peppara and Neyyar wildlife sanctuaries in the state.

This is problematic because the operation of quarries in and around the Western Ghats in the state has been recognised as a factor that plays a role in landslides that have been hastened by intense rainfall events. Scientists and environmentalists, for example, have said that unscientific excavations in more than 30 quarries in and around Kavalappara in the Malappuram district played a major role in making the area vulnerable to landslides. In 2019, a landslide claimed almost 50 lives here.

Thiruvanthapuram’s drinking water supply comes from the Neyyar and Peppara regions, so quarries here can also potentially affect the city’s drinking water supply, said A.J. Vijayan. Additionally, the work on road and rail access for the Vizhinjam Port project – which is also the state’s responsibility – has not yet begun, he said.

“This is the time to stop work on the project with minimal damage,” he said. “Please stop the port. We don’t want it. It will cause even more damage in future.”

Additionally, a report by the Comptroller and Auditor General (CAG) in 2017 warned that towards the end of the concessional period (40 years), the government of Kerala would have incurred a loss of Rs 5,608 crore due to the construction of the project. It also found that the tendering process was flawed and that conditions of the agreement were prepared in favour of the Adani Group, instead of being in favour of the state, reported The Federal.

Currently, fishing and coastal communities from more than 40 villages along the coast are participating in the protest to bring a stop to the construction of the Vizhinjam Port project, said Vijayan. More land and ocean protests are being planned by the protest committee, to which the Latin Catholic Archdiocese of Thiruvananthapuram has also recently lent support. The Adani Group was forced to temporarily stop construction activities after protestors went inside the construction site, reported Down to Earth on August 17.

On August 29, fisherfolk will again take to the ocean in their country boats to give voice to their protests. As Thiruvananthapuram celebrates the festival of Onam on September 8 with floats across the city, the fisherfolk would also take floats of country canoes to the city and to the chief minister’s residence, said Father Theodacious D’Cruz, the spokesperson of the church and secretary of the protest committee.

On the CM’s allegations that this was a planned protest, a visibly angry D’Cruz said that this is indeed planned, as all coastal communities that are affected by the project are coming together.

“There is no caste or religion in this protest,” he told the media following the developments in the State Legislative Assembly and the CM’s stand that there would be no backing off from the port project.

He went on to add that the protestors will not back off until their demands are met, and the chief minister is forced to change his stand regarding the construction of the Port. This is a struggle of life and death for people, he said.

“These are fishermen. We will rest only after we win this protest,” D’Cruz added.