‘Why am I still here?’ Finding hope in human connections even when the pandemic robs us of purpose 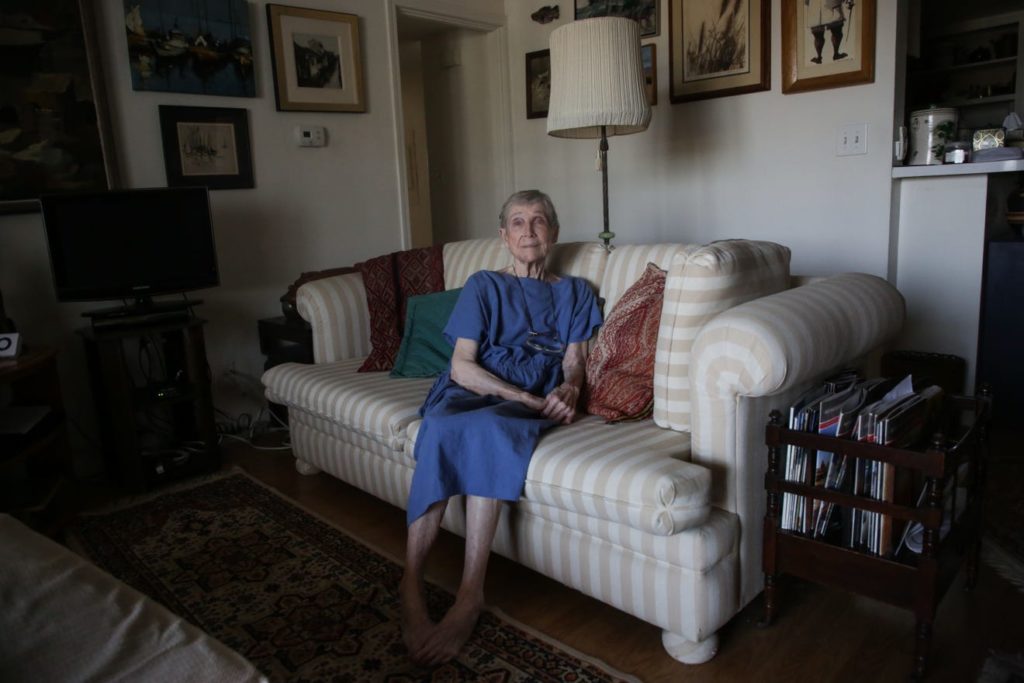 Rancho Mirage resident, Julia Weaver, 89 (now 90), sits on the couch in her living room on Sept. 17, 2020. As a precaution, she has stayed inside her home during the duration of the COVID-19 pandemic. (Photo by Vickie Connor/The Desert Sun)

RANCHO MIRAGE, Calif. — Julia Weaver lives in the building adjacent to mine. Hummingbirds are frequent visitors on her plant filled patio. Every morning after she reads The Desert Sun, the newspaper I work for, Weaver wraps it in a rubber band and tosses it up the stairs to her neighbor’s patio.

For her neighbor, the newspaper signals that Weaver, 90, is alive and well. Weaver moved into the apartment in 2015 following her husband’s death. Since then, the breast cancer survivor has had pneumonia, an infection in her lungs, and spots in her eyes. She lives alone and spends her days reading, writing, and cleaning. Sometimes she bakes big batches of biscotti, brownies, or cookies and shares them with her neighbors.

“At my age, you wonder why you’re still here,” Weaver said this past summer.

“Why am I still here? I think about that often,” Curran told me.

At 31, I’ve been asking myself the same question.

Even more than loneliness, for some seniors, the hardest thing about this pandemic has been the loss of purpose. Nothing to volunteer for, no grandchildren to visit, no book club conversations or community theater performance.

What is life without these things? Why are we even still here?

I interviewed Weaver several times this past summer, when I was still fresh on my new job writing about seniors in a new place working for a newsroom I’ve never had the opportunity to work inside of.

“This is really a different place to live in,” Weaver told me. She said that there isn’t much to do, especially for young people. I will probably want to take trips over to Los Angeles, she said, when things open up again.

In our town, Rancho Mirage — located in California’s Coachella Valley — more than half the population is age 65 or older, according to the U.S. Census Bureau. In nearby Palm Springs, seniors make up a third of the population, and about 15 percent in California overall.

When I told my friends that I was going to write about “seniors,” not many of them knew what that meant. Images of nursing homes, graying hair, frail bodies and bingo games came to mind. I mentioned that I was writing a story about sexual health only to be met with an “eww.”

I asked them if they still wanted to be having sex 20, 30, even 40 years from now and the answer was always in the affirmative. This is how I explain what it means to write about seniors — it is essentially telling people’s stories. And seniors, having lived longer than others, often have the most interesting stories.

But Weaver didn’t think her story was one of them.

She served me coffee and homemade biscotti in antique, gold trimmed dishes and proceeded to tell me about her “not very interesting” life. She lives alone, never had any children and spends most of her days isolated in her apartment. She’s also an illustrator, writer, scholar and adventurer.

But before all that, Weaver and her late-husband eloped in 1954. She was in her early twenties, had graduated college and was working as a technical illustrator. He was a World War II veteran and an engineer. Together, they traveled the world, visiting archaeological sites and ancient ruins.

The day he died, Weaver was 10 minutes too late making it to his bedside.

“I sat there and held his hand — and I don’t know that he knew I was there, but, they say, even if you’re unconscious, they’ll know — they recognize your voice,” she said. “So I talked into his ear for a while. And then, when his hand and his body got cold, I just left.”

It was late August. The high was 109 degrees. The sun was shining every day and, whenever I could, I tried to get outside and swim in the pool. The rustling of the palm fronds above me and the chirping birds beside my building calmed me, taking me away from the stresses of the pandemic news cycle and back to myself. Back to my own thoughts.

No one was allowed to visit my brother when he checked into the intensive care unit in May. It was Mother’s Day. He was in Florida and our mom was in New Jersey. From my apartment in Berkeley, I tried to book her a flight, but, because of the pandemic, New Jersey residents were banned from visiting Florida. She thought about driving, but couldn’t make it on her own and we were afraid she’d stick out with her yellow “Garden State” license plates. After four nights in the hospital, the nurses stopped sounding hopeful. They finally allowed my dad, who was already living in Florida, to suit into Personal Protective Equipment and enter my brother’s room to say goodbye while our other brother waited outside the hospital.

I asked the nurse if I could talk to him, she agreed but let me know that he wouldn’t respond — that he was unconscious. She put the phone up to his ear and I had nothing to say. I didn’t know what there was to say. I just knew this wasn’t how it was supposed to be.

“I love you,” I said, trying not to cry too loudly. I’m not sure if I called him “brother,” said his name or if I added a “so much” to it. I let the silence sit there between us for a moment then hung up.

I didn’t tell Weaver any of this. She didn’t know I had lost my brother just months before moving to the desert and meeting her. She didn’t know how much I hoped that she was right — that the unconscious could still hear us, feel us.

There was no big funeral for Weaver’s husband. They didn’t have much family in the area, so he left with little fanfare, his ashes shipped out to sea via a boat out of L.A. Weaver wasn’t there for it. She doesn’t even know what day it happened because there was a backlog.

“This is so silly for you to have to listen to this,” she told me “This is so weird. It is weird, but it’s part of life, you know.”

It’s been one year since the pandemic shut down California and, soon, it’ll be a year since my brother died. We didn’t have a funeral either. There was no obituary. Who even has his ashes? Did my dad pick them up? Did my brother? Neither me or my mom know for sure.

Weaver answered question after question without pausing much. She’d occasionally check in to make sure I still wanted to know more. She had already lost her parents, some siblings and her husband.

After her husband died, she gave away many of their belongings. She kept some travel mementos, a lot of art, books and a cabinet built by her husband. Still, she’s continued trying to give things away — to distant family members, neighbors, charity shops and this reporter.

When people die, she said, “Somebody’s got to go through all that stuff.”

Her apartment looks similar to mine. The many bookshelves are filled with an eclectic collection of fiction, non-fiction, travel guides, cookbooks, artwork and history — even a copy of Strunk & White’s Elements of Style. Drawings and paintings from the places she’d journeyed adorned the walls and issues of National Geographic magazine laid in a wooden rack next to the couch.

My brother didn’t have a lot of stuff in his apartment, but my dad salvaged what he could. Back in New Jersey, my mom still had some of his things in storage from before he headed south. I went home in October so we could go through it together and so that I could claim something for myself — a piece of him or, perhaps, a faded memory.

I found a photo of us when we were little, so little that I have a pacifier in my mouth and a sleepy face. He’s holding me with his mouth half open in a smile. I also brought home a Nine Inch Nails t-shirt of his, and, what I was really hoping to find, his red boxing gloves.

The gloves now sit at the top of a cabinet in my living room on a shelf with some old books I’ve collected over the years. In the same cabinet, amidst all my other books, my music records, some artificial ferns and a stack of newspapers, is also a book that Weaver insisted I take. It’s a mystery set in World War II in France with a female photographer as its heroine.

Weaver admires strong, independent women and they play the lead roles in the books that she writes and, sometimes, self-publishes just for fun.

“I’ve always been a reader and I love books,” said Weaver, sitting barefoot at her kitchen table in a sleeveless plaid house dress she made herself. “Now I have time to do it.”

She draws on those memories as well as the many brochures she collected to write books about heroic women, going on adventures of their own and solving mysteries.

It’s through these characters that she gets out of town. It’s through them that she continues to live. I feel a similar drive towards my sources and, during the worst time of my life, it is helping tell their stories — and sometimes helping them get vaccine appointments — that has kept me going these last nine months.

Weaver sent me a thank you card after reading a story where I featured her among seniors showing resilience despite the COVID-19 induced isolation. Weeks later, she also sent me a letter congratulating me on my reporting and informing me of how much she’s been enjoying my writing. She included her biscotti recipe.

I bumped into her the next day outside our adjacent buildings. We talked for a minute, she asked if I wanted her old espresso maker — she and her husband used to enjoy it. I found out it was her 90th birthday the next day and decided to send her a card.

I’ve never been very good about sending cards, but it seemed like something an older person might appreciate. I bet my friends would appreciate it, too. They’d all come out of the woodwork to take care of me when my brother died. I didn’t know how to thank them. Their love carried me through, every short text and phone call had reminded me that not all things are bad.

I’ve been crying nearly every day for almost a year. Crying for my brother, crying for the future we won’t have together and the past that wasn’t what we wanted it to be. Crying for all the blessings I have in my life still — the people who are still here. And crying at every tidbit of hope, goodness and light I see in the world.

I decided I’d send all these friends Christmas cards this year. For most, I took the time to write a personal letter as well.

I cried while writing some of them just as I had teared up at reading Julia’s card.

I don’t know why any of us is still here, but I’m glad, as the new saying goes, “we’re in this together.”

Maria Sestito covers aging and the senior population in Coachella Valley for The Desert Sun. Follow her on Twitter: @RiaSestito.