‘Where do we go from here?’ Deep wounds and dark memories for Christians in Iraq 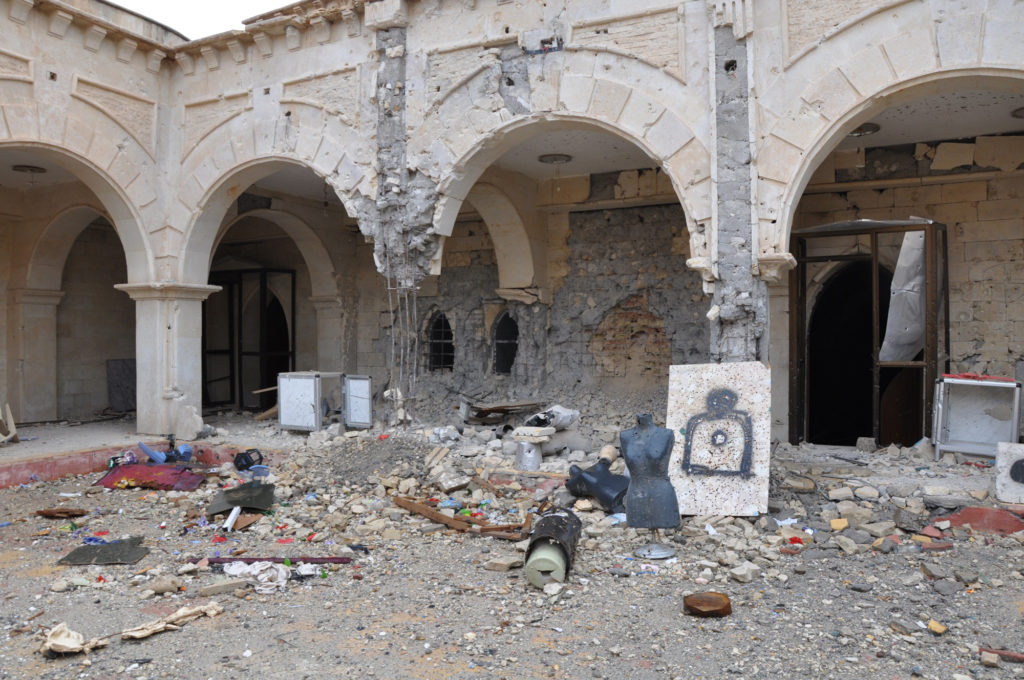 The courtyard of Qaraqoosh's Al-Taheera church, the largest in Iraq and one of the biggest in the Middle East, was destroyed when ISIS transformed the grounds into a shooting range with mannequins from a nearby clothing shop. (Photo by Lauren Bohn/GroundTruth)

QARAQOSH, Iraq – On Sunday, 17-year-old Ismael Al Kanon will celebrate his favorite holiday, Christmas, for the first time since 2014.

“This year I won’t have to pretend to be someone else,” he says while staring at the floor and clenching his jaw. It’s a tic he developed from living in hell for more than two years, he says. “Sometimes, I forget I’m free.”

In 2013, the so-called Islamic State thundered across Iraq and captured Mosul, Iraq’s second largest city, and surrounding areas including Ismael’s predominantly Christian village. More than 150,000 Christians fled their homes to the neighboring semiautonomous Kurdish region. The Internal Displacement Monitoring Center estimates that at least 3.3 million Iraqis were internally displaced as of Dec. 31, 2015.

Ismael and his partially paralyzed mother, Jandark – named after Joan of Arc – tried to flee in the first days of ISIS rule, but they were too late. At an ISIS-manned checkpoint, he and his mother were not only stopped, but were found out to be Christians. ISIS militants beat Ismael and immediately dispatched the mother and son to Mosul. So began a horrific tale that would last two and a half long years, until Iraqi coalition forces liberated neighborhoods surrounding Mosul a month and a half ago. Mosul still remains under ISIS-control. Up to one million people are trapped inside the city with limited food and water supplies and an increasingly cruel network of fighters. Since the offensive began in October, at least 100,000 Iraqis have been displaced from the city.

During their time under ISIS captivity — “a long, long nightmare with no color,” as Jandark describes — Ismael and his mother were shuttled among different ISIS-controlled neighborhoods and kept as prisoners by a motley crew of militants who beat them and forced them to convert.

“Do you want to end up like him?” Ismael recalls being asked by an ISIS militant who had dragged him to a cell where a slain Iraqi man was covered in blood. The militant made Ismael scroll through the militant’s Samsung photo gallery, a virtual catalogue of gruesome beheadings and other fates doled out to those who neglected to play by the group’s rules.

In two and a half years, Jandark remembers seeing the sky only a handful of times. She was hit and pricked with needles when she failed to memorize the Quran, the Islamic holy book. Ismael, who was forced to pray at the mosque lest he wanted to be lashed 25 times a day, saw public executions every Friday in which 13-year-old boys, “sons of the Caliphate,” were forced to shoot men who were accused of treason.

“None of it seemed real,” he told me in the small room he now shares with his mother at a Christian charity in Ainkawa, a historically Christian neighborhood of Erbil. A handful of rosaries hang on the chipped white walls, swaying when the rats overhead scuttle. “Except it was all real and it was our lives.”

In November, when Ismael learned that the Iraqi military was close to the El Tahrir neighborhood – which ironically means “liberation” in Arabic – where he and Jandark were being kept, they decided to escape. Despite Jandark’s limp, they evaded sniper fire and sought shelter along the way with Iraqis who had pledged allegiance to ISIS, though detested the group behind closed doors. When they finally found a group of Iraqi soldiers, Jandark said she fell to the ground and sobbed.

Though they are now living in relative safety in Iraqi Kurdistan, they fear for their lives and a future in a country that seems to have no place for them. Ismael and Jandark’s story is part of a larger, decades-long one, about the exodus of the Christian minority population from the wider Middle East. Iraq’s Christian population, which is an ancient mix of Chaldean Catholics, Syrian Orthodox and members of the eastern Assyrian church, have traditionally had a strong presence in the northern province of the region. Twenty years ago, church officials estimated that as many as 1.3 million Christians lived in Iraq. But dictatorship, war and suffering has forced Christians to flee their villages. After the U.S. invasion of Iraq in 2003, extremists targeted Christians and other minorities, causing hundreds of thousands to flee. It is estimated there are fewer than 400,000 Christians left in Iraq today.

Over the last week, I interviewed dozens of residents from now liberated suburbs of Mosul. Not a single one said they’d return to their historic land – the breadbasket of Mesopotamian kingdoms dating back thousands of years before Jesus.

“How do they expect us to return?” 34-year-old Saha asked me last Thursday in Qaraqosh, Iraq’s largest Christian city where some 50,000 people once lived. Saha, along with her husband and 7-year-old daughter, had returned for the first time since they fled two and a half years ago. They found their home unrecognizably destroyed like most of Qaraqoosh. The once bustling city, lined with upscale shops and newly renovated homes, is now a post-apocalyptic ghost town — an open-air museum of brutality and loss.

“Nothing is safe and no one can be trusted,” Saha said. “We may never return. Everyone wants to leave Iraq.”

The Islamic State’s emergence – and the Iraqi government’s ongoing sectarian policies – has only deepened ethnic and religious faultlines in Iraq. Despite efforts to unify against the extremist Sunni insurgency, Iraqi military cruise around liberated towns waving Shia flags perpetuating the notion of a Holy War.

Father Efraim Ignatius, a priest in Qaraqoosh, says such a deficit of trust is exactly what the Islamic State wants across the region.

For Maha Gebo, a native of Qaraqoosh, leaving had always seemed implausible, but staying has now become  impossible.

“Maybe one day, we will rebuild,” she said as she went through the wreckage of her beloved kitchen, the repository of so many cherished memories. “But right now, it hurts too much. Where do we go from here?”

Ismael has been asking himself the same question everyday for the past two and a half years. He says he hasn’t come up with an answer. He only has more questions. Every time he walks down the safe streets of Ainkawa, lined with Christmas lights and balloon Santas, he fears he’ll run into a former militant.

On a recent Friday night, his mother urged him attend a Christmas party at the Christian charity where they’ve been living. Kids were joyously decorating a tree in the lobby and teenage girls were shyly dancing with themselves in a circle. But Ismael decided to stay in, as he does most days, and play computer games. Conflict Desert Storm is one of his favorites.

“My mind still isn’t clear yet. It all seems like an action film and maybe it could be one,” Ismael says, regretting he wasn’t able to retrieve his favorite cross necklace, which he left hidden under a television set at one of the apartments ISIS kept them in.

“They took my childhood … years that I’ll never get back,” he says. He’s been out of school now for three years and wants nothing more than to attend university some day and become an IT engineer. “This isn’t my country anymore … It’s no one’s country anymore.”

Lauren Bohn is The GroundTruth Project’s Middle East correspondent based in Istanbul and co-founder of Foreign Policy Interrupted.

A version of this story also appeared in the New York Times on December 23, 2016