‘Where are the women?’: The untaught history of women’s suffrage 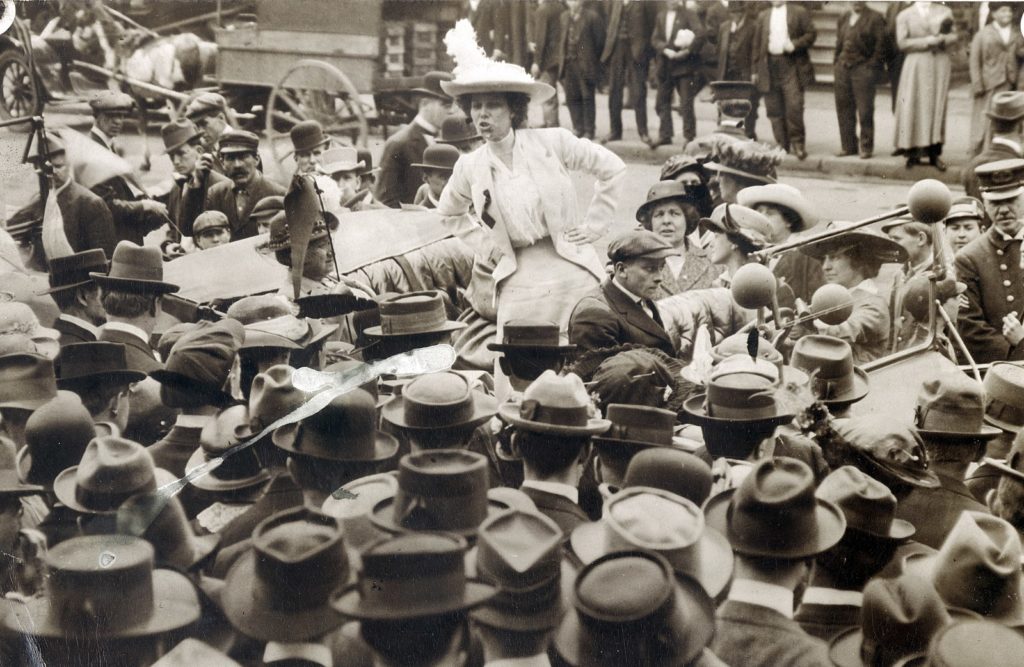 A suffragette addresses a crowd in front of the St. Louis Court House, National Women's Suffrage Day on 2 May, 1914. (Photo courtesy of the Missouri History Museum)

This story is part of a larger reporting effort on voting rights in America presented with support from the Jesse and Betsy Fink Charitable Fund, the Solutions Journalism Network and the MacArthur Foundation.

Along with millions of other mostly young girls who continue to be fanatical about all things American Girl, Lange says, she felt a sense of common identity with the dolls. “I saw myself in those stories,” she recalls. “And it piqued my interest in history.”

Now an associate professor of women’s history at Wentworth Institute of Technology, Lange knows her exposure to these types of stories — histories centered around women and girls — was far from ordinary. Complex women’s stories in traditional history education, she says, remain largely untold. Her life is dedicated to filling that gap.

In commemorating the centennial of the 19th Amendment, with which women first won the right to vote, Lange and the 22 other women who make up the Women’s Suffrage Centennial Commission came together with one simple but ambitious goal: To educate Americans about women’s often-ignored U.S. history.

The commission — the brainchild of Sen. Tammy Baldwin, D-Wis. — is a temporary federal panel made up of veteran feminist activists, political leaders, elected officials and historians seeking to honor and celebrate women’s history with this anniversary.

“For women, our history is so rarely taught to us,” says Anna Laymon, the commission’s executive director. “For women to know where we’re going, we have to know where we came from and what it took to get to where we are.”

The women’s suffrage movement was one of the longest running social justice movement America has yet seen. It spanned from 1848, when the first women’s rights convention was held in Seneca Falls, New York, to 1920, culminating in the ratification of the 19th Amendment, the largest single enfranchisement effort in American history. Many argue that the movement continues to inspire voting rights efforts nationwide.

Related: On the Ground with American Experience. In commemoration of 100 years of the 19th Amendment, we’ve teamed up with PBS’ American Experience to share stories of efforts to expand voting rights across the United States today, in communities covered by Report for America corps members.

But traditional history education and textbooks massively undercut the immensity of the movement, historians say. Women’s stories and female characters throughout history are often documented as a side story to male protagonists and told from a male point of view.

The status and experiences of women in standard U.S. social studies curriculum, reported the National Women’s History Museum, are “not well integrated into U.S. state history standards.” The report criticized the standards’ overemphasis on women’s domestic roles and the exclusion of women’s roles in leadership.

Reforming history education is not just about proper documentation. For women and other underrepresented groups, Lange says, how history is archived shapes how people orient themselves in society now and in the future. “It’s about seeing oneself,” the historian says. “Understanding how people who may have been like me lived life in the U.S. a century ago is a really empowering thing to have. By telling the right story, it does inspire a new generation to think about the ways they want to change society.”

The commemoration of the centennial is largely symbolic, a bipartisan effort to educate Americans about the monumental efforts of the women’s suffrage movement. But it has also provoked real action. Since its inception in January, the Suffrage Commission launched a series of podcasts, blog posts, virtual events and an initiative to arm libraries across the country with children’s books about the movement. This month, the commission, in partnership with every female senator in office, pushed Congress to officially designate August 2020 as National Women’s Suffrage Month.

Because the women’s suffrage movement was long criticized for “white washing,” one of the Suffrage Commission’s primary goals is to promote Black women’s stories and amplify the voices of lesser known suffrage activists, like Mary Church Terrell.

“We remember Susan B. Anthony,” Lange says. “Why don’t we remember Terrell? That’s the story that we’re trying to change here.”

And the group is dedicated to disrupting the traditional language, characters and narrative of suffrage history on all levels: A recent post on the commission’s blog tells the little known story of queer suffrage leaders. “The whole point of academia is to create new stories,” Lange says.

The centennial of the 19th Amendment is not the first widespread push to rewrite a skewed history. Fifty years ago, well-known feminist activists — the likes of Gloria Steinem, Bella Abzug and Betty Friedan — led the charge during what was referred to as the second-wave feminist movement.

The Women’s Strike for Equality, on Aug. 26, 1970, marked the 50th anniversary of the ratification of the 19th Amendment and called for equal employment and educational opportunities for women. This was sponsored by the National Organization of Women, which spearheaded the fight to pass the Equal Rights Amendment in 1972, although it was ultimately not ratified. Feminist authors at the time published now infamous books, like Ellen DuBois’ “Feminism and Suffrage,” that sought to rewrite and reinvigorate women’s history.

Recent years have seen a new wave of women’s stories and voices coming to light. The #MeToo and #SayHerName campaigns encourage women to speak out against sexual assault and harassment, and for those fighting for civil and social justice to amplify the stories of Black women.

While the Women’s Suffrage Centennial Commission does not have direct goals to inform policy change or school curriculum, Lange says such effects will be inevitable. “This moment of awareness of women in politics is going to inevitably change policies,” the historian says, “I hope.”

She expects the high-profile celebration of a woman’s right to vote during a critical election year will spur increased voter turnout.

Executive Director Laymon, too, strives to inspire a more cultural, systemic shift that challenges the way Americans view and consume history: “As we’re looking through our history books, if we don’t see women’s stories, I hope people at least ask, ‘Where are the women?’ ”

Megan Botel is a Poynter-Koch Media and Journalism Fellow with The GroundTruth Project.  Follow her on Twitter: @meg_botel