What’s It Like to Be a Female Journalist in the Middle East? 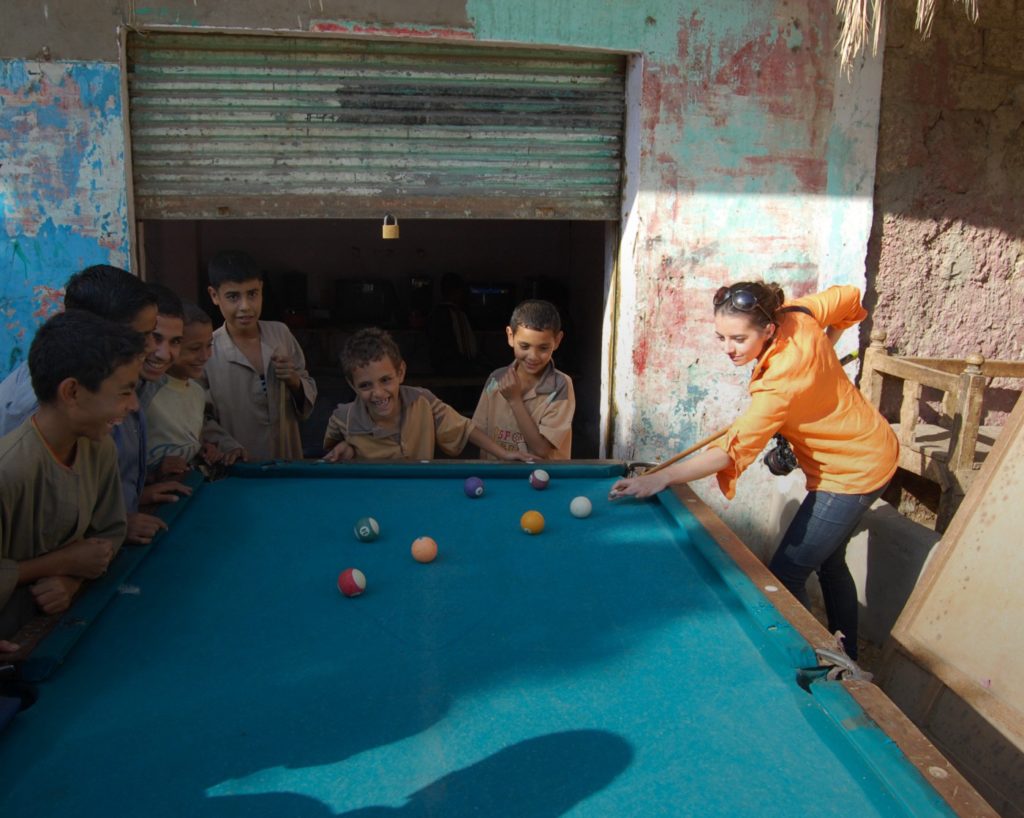 This article was published in partnership with Cosmopolitan magazine. A version appears in GroundTruth’s Field Guide for Correspondents.

Ruby-red fireworks tore through Cairo’s sky and victorious chants pierced through Egypt’s famed Tahrir Square on the night of Feb. 11, 2011. A sense of euphoria, of endless possibility, hung in the air. After weeks of heady, deadly protests, Egyptian president Hosni Mubarak had finally resigned. And as a journalist, I was blessed with a front-row seat to history being made.

I shoved my way into a crowd of jubilantly dancing men with my notebook and video camera to record the momentous time in history. Soon, my own excitement devolved into fear when a handful of men crowded in on me, fondling my breasts and groping my ass.

The whole encounter lasted all of 10 blurred seconds before my male translator managed to push them away. We both scolded them, but they simply shrugged and went on celebrating, their chants growing even more deafening and triumphant.

“This is Egypt,” my translator told me, his face a portrait of disgust and shame. “I’m sorry you have to deal with this.”

It’s not just me, or even just foreigners. According to a 2013 United Nations survey, 99 percent of Egyptian women have been sexually harassed — 96.5 percent of whom say they’ve been physically assaulted.

I was 23, just beginning to “make a name” for myself. I remember at the time asking a female colleague if I should tweet about the experience.

When I’m asked what it is like being a female journalist in the Middle East, I tend to roll my eyes. And I cringe to even mention that night in Tahrir Square. The hundreds of men and women I’ve met over the past four years — people who have fed me, who have sheltered me, who have protected me, who have taught me —are far more representative of my experience.

A significant portion of my distaste for the question also comes from the fact that I’ve always felt my being a woman is to my advantage journalistically and personally while reporting in the Middle East. The reason is admittedly problematic. The same misogyny and patriarchy that holds women down can be a double-edged sword. In the eyes of many, I’m generally viewed as seemingly less threatening and powerful, and hence easier to talk to. I know I’ve been able to secure interviews with conservative Islamists because they don’t think I’m capable of harm.

“Look at her, she’s small,” a conservative Egyptian Salafi once joked to my male translator.

In Bahrain, on the heels of intense anti-government protests, one government official said he accepted my request for an interview “because I seemed like a nice girl.”

When I was reporting in Syria at the beginning of the country’s civil war, my driver and I managed to pass through a tense military checkpoint in the country’s restive Daraa Governorate. When we returned to relative safety in Damascus, he turned to me while wiping beads of sweat from his brows. “Good thing you’re a friendly-looking woman,” he said, with a nervous laugh of relief.

My being a woman, too, has given me access to reporting on people and topics I wouldn’t be able to as a man. For instance, it’s been easier to establish trust with Syrian refugee women, and with female members of Islamist and even secular organizations. If I were a man, I don’t think I’d have been able to cover stories about sexual violence or oppression as well as I have

It’s easy to pigeonhole these stories as “women issues” and “women’s stories,” but they’re stories about pivotal moments in history. They’re just as significant and telling, if not more, than big-bang war dispatches or cerebral analyses, considered “hard news” and therefore more apt for male journalists.

Part of my distaste with the perennial question about being a woman also stems from the insidious conceit that gender roles in the Middle East are so very different from those in the seemingly post-racial, post-gender, post-everything West. Yes, as a whole, it may be “easier” and “better” to be a woman in the United States than in war-torn Yemen and Libya. But we risk treading into the murky waters of Orientalism and reductionism if we give more scrutiny to gender dynamics in the “Muslim world” than we give “the West.”

Almost two years ago, after a few intense reporting trips through the Middle East, I met with a prominent editor in New York City to discuss possible editorial projects. He opened a conversation about my work by mentioning that he had heard I “always seemed to look put-together” while covering events in the Middle East. Perhaps he meant it as a compliment — an icebreaker of sorts. But I doubt such a comment would ever be voiced about or to a male colleague.

The editor’s remark about my appearance left me uncomfortable, swirling in revulsion at the minimizing of my self-worth. It’s the same revulsion I felt that night in Tahrir when freedom-fighting men grabbed me. Why were three years of busting my butt journalistically — scores of enterprising stories published and important relationships cultivated — boiled down to how I looked while covering those stories? Was my body once again up for grabs, both literally and conversationally?

When I asked a different colleague if I should address the editor about his remark, he said, “Eh, let it go. He’s a jerk.”

But young female journalists, especially those who are independent, without built-in supervisors or mentors, should not feel forced to always let things go. No journalist should. We must be able to discuss such experiences, without fear of judgment.

As a community of journalists — and women — we must help one another with these experiences and work through them. Since I started Foreign Policy Interrupted, an initiative dedicated to amplifying female voices in foreign policy, female journalists and those in foreign policy fields have come to me, seeking advice on everything from dealing with a tone-deaf male editor (“I feel like he assigns better stories to men and pays them more too”) to navigating a male-dominated industry (“Will people take me seriously if I wear red lipstick on a foreign policy panel in Washington, D.C.?”). Ahead of World Press Freedom Day, my news organization, The GroundTruth Project, released a revised version of “A Field Guide for Correspondents,” a helpful tool for journalists starting out their careers, especially in conflict zones. A key takeaway: While reporting or analyzing the “ground truth,” stay true to your own.

We don’t live in a post-gender world. There have been remarkable advances in gender equity, but our genders carry complicated codes and even more complicated dynamics — whether we’re working on the Syrian border or in New York City.

We must not only acknowledge these complexities, but also seek to cultivate honest spaces where dialogue about them is constructive. Our shared humanity, and the stories we record and tell about that humanity, will be all the better for it.