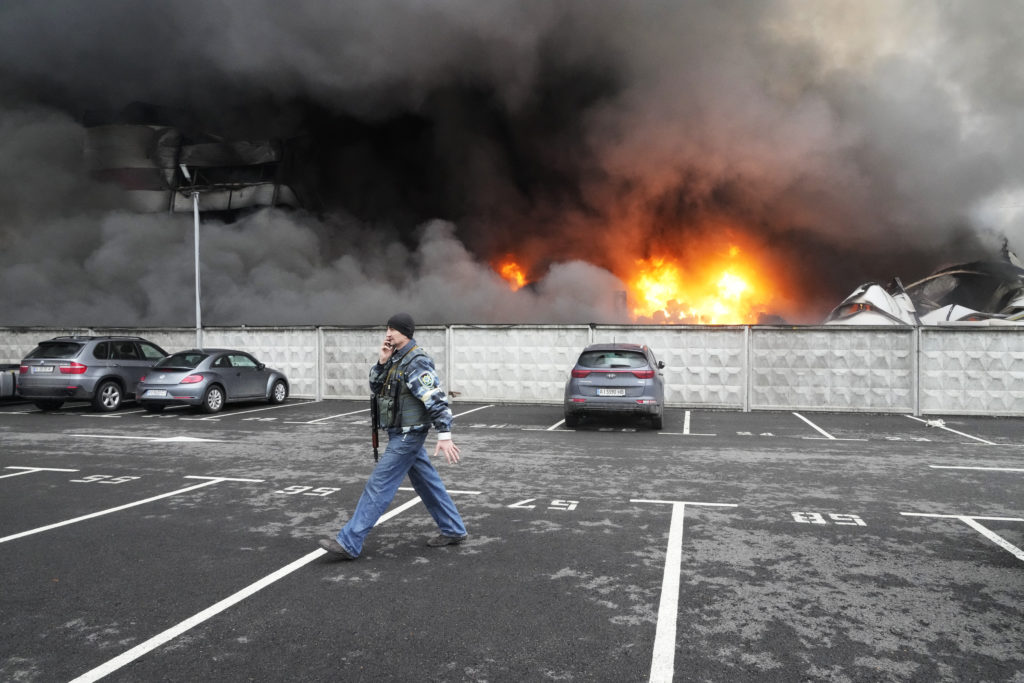 A Ukrainian serviceman walks past as fire and smoke rises over a damaged logistic center after shelling in Kyiv, Ukraine. (Photo by Associated Press/Efrem Lukatsky)

In times of war, misinformation becomes even more rampant and harmful. The invasion of Ukraine by Russia is no exception.

For those outside the conflict, it’s more difficult to discern between reliable sources and propagandists, particularly when there are cultural and language barriers that can confuse those seeking accurate information. This is where local, on the ground reporting becomes invaluable.

In Ukraine, two independent news organizations publishing in English have been providing accurate reporting from multiple fronts of the war. The Kyiv Independent launched only three months ago after journalists from the Kyiv Post banded together after their former employer closed the publication. But their experiences countering the narratives of Russian state outlets like Russia Today and Sputnik news have already helped position them as a trusted source of news.

Likewise, The New Voice of Ukraine has been covering the war non-stop through their website and radio station, making them a target for cyber attacks.

Both organizations are accepting international donations to support their efforts to cover the war. If you wish to help, you can find more information here and here

OpenDemocracy, a news organization based on the United Kingdom that has long covered Ukraine, including Russia’s annexation of Crimea in 2014, is raising funds for Ukrainian journalists and for the organizations that provide protective gear for them.

Foreign reporters, even those that are providing analysis and commentary from afar can also contribute to improve the quality of the coverage of the war by taking a hard look at their work and make sure that they are not perpetuating stereotypes or diminishing the suffering and importance of other conflicts in an attempt to show empathy for the plight of Ukrainians.

As former BBC reporter Marcus Ryder explained in a piece for OpenDemocracy: “This all matters not simply because journalists should adhere to principles of equality and anti-racism, but – possibly more importantly – because statements like these undermine the very trust people of color have in mainstream news outlets and, in turn, increases the probability they will turn to other news sources.”

L.A. Times television critic Lorraine Ali also warned about the pitfalls of bias (conscious or unconscious) and applying double standards for conflicts, quoting a statement from The Arab and Middle Eastern Journalists Association: “This type of commentary reflects the pervasive mentality in Western journalism of normalizing tragedy in parts of the world such as the Middle East, Africa, South Asia, and Latin America. It dehumanizes and renders their experience with war as somehow normal and expected … civilian casualties and displacement in other countries are equally as abhorrent as they are in Ukraine.”

News consumers can also help elevate the best reporting about the war by keeping an eye out for disinformation and checking before sharing dubious stories. As of Thursday, fact checkers had published more than 500 articles debunking false claims or narratives related to the war, including the widely shared stories of the so-called “Ghost of Kyiv” who shot down six Russian fighter jets, the apparent heroic deaths of Ukrainian soldiers at Snake Island and a barrage of social media posts aiming to support Russia’s claim that Ukraine is not a legitimate state.

Local, independent journalism plays a vital role here as well, not only to show the world the human rights abuses being perpetrated against civilians, but to separate fact from the propaganda that governments put forward to raise morale internally and gain support outside their borders.

The Nieman Lab at Harvard University shared more resources, including those listed here for those who want to follow the conflict and help those covering it. As with other moments where history is being written in front of our eyes we, both journalists and audiences, need to be inquisitive and contribute to spreading the truth in any way we can.