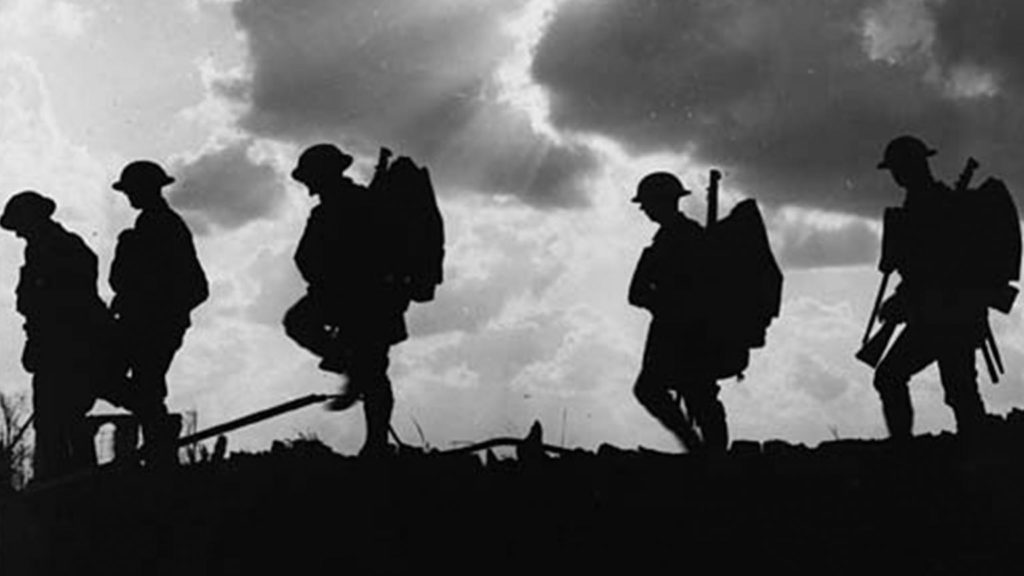 H.G. Wells called it “The War That Will End War,” which it certainly wasn’t. Woodrow Wilson said it would “make the world safe for democracy,” which it didn’t. And what Wells called the “Petty Peace that followed” failed to bring a new world order that could preserve peace.

The Great War, which began 100 years ago, ended on the 11th hour of the 11th day of the 11th month in 1918 and was the most geopolitically destructive event of the 20th century.

This generation has its own sea of troubles, conflicts, and crises with multiple attempts at resolution around the world. The second round of talks on ending the war in Syria ended in deadlock last week in Geneva, and the talks on Iran’s nuclear program are resuming this week in Vienna. It is a time of active diplomacy, but not necessarily effective diplomacy.

And there are many lessons to be learned from studying the history of World War I. Indeed, many of the conflicts and crises we face today follow from what was done — and not done — after ‘the eleventh hour’ ended the great cataclysm of World War I from 1914-1918.

What if the Paris Peace Conference that followed the war had dealt with the remains of the Ottoman Empire differently, not giving Syria to the French and Palestine and Iraq to the British? What if Zionism and Arab nationalism had been handled differently before they came to such loggerheads?

What if Britain and Russia had not divided up Iran into their own spheres of influence? And what if colonized peoples in Africa and Asia had begun preparing for independence in 1919, rather than letting colonialism rattle on through numerous wars to its death throes through the 20th century?

As historian Margaret MacMillian put it: World War I “toppled governments, humbled the mighty and upturned whole societies. In Russia the revolutions of 1917 replaced Tsarism with what no one yet knew. At the end of the war Austria-Hungary vanished, leaving a hole at the center of Europe. The Ottoman Empire, with its vast holdings in the Middle East and its bit of Europe, was almost done. Imperial Germany was now a republic. Old nations, Poland, Lithuania, Estonia, Latvia- came out of history to live again, and new nations, Yugoslavia, and Czechoslovakia — struggled to be born.”

Economic power inexorably fled the continent forever and shifted across the Atlantic to the United States.

World War II may have confronted greater evils, killed more people, and brought far greater destruction over vaster territories. But with few exceptions national boundaries stayed the same when it was over. The Allies made sure that the losers regained their economic health, rather than imposing crippling reparations as was done after the Great War. Japan even got to keep its emperor.

By contrast World War I swept away kings and ancient empires and challenged the very foundations of Western civilization.

The years leading up to World War I had seen great rivalry over who would feast most on the dying Ottoman Empire and the weaker states of North Africa. The crises over Bosnia and Morocco brought rising tensions between Russian, British, French, German, and Austro-Hungarian interests. Italy went to war to wrest Libya from the Ottomans in 1911. The newly hatched chicks of the dying Ottoman hen, Serbia, Bulgaria, Romania, and Albania, fought two Balkan wars over their shares in 1911 and 1913.

Otto von Bismarck had predicted that the next war would start over “some damned foolish thing in the Balkans,” and when the heir to the Austrian throne was assassinated in Sarajevo, and Austria set about to crush Serbia, the great German chancellor was proven right.

A system of military alliances bound the great powers together, and like so many climbers tied together, they all fell into the crevasse.

Domestically the pre-World War I years were not the bright, sun-lit uplands as portrayed in films. Industrialization was causing ever-increasing labor strife that led many countries to fear revolution.

Another factor was the nationalism that had risen in the 19th century coupled with the new power of public opinion. Nationalism made ruling the polyglot empires of Austria-Hungary and Russia difficult to rule. Different language groups and ethnicities all wanted their independence and freedoms. Even Great Britain, in the months leading up to World War I, spent more energy on Irish nationalism and incipient civil war than on the coming world war. The considerable peace movements in every country withered before the flame of nationalism as war approached.

At war’s end Winston Churchill wrote that no one nation or individual could be blamed for the catastrophe, no “devil heart conceived and willed this awful thing.” Rather it was the spirit of “patriotism and nationality” that grew steadily. It was their virtues, rather than their vices, “ill-directed or mis-directed by their leaders,” that led nations to their undoing.

Forty years later historian Barbara Tuchman would write, “the nations were caught in a trap,” a trap with no exit.

A handmaiden of nationalism was an exaggerated concern for national prestige. Austria’s Franz Ferdinand, whose murder would trigger the war, wrote in 1908 that annexing Bosnia “showed Europe once more that we are still a great power.”

Too often war and conquest were the measures of national respect. We see echoes of that today when conservatives in America conflate military intervention with national prestige.

“Friends and foes alike look at the United States today and see a powerful nation comfortable with its impotence,” writes a pundit in 2014. And what defines American impotence? It’s the Obama administration’s “conviction that Washington must intervene less, ” opines our conservative commentator.

The word “impotence” echoes the voices of one hundred years ago that equated military intervention with manliness and virility. In 1914 Germany there were constant references to German exceptionalism.
Public opinion, as well, was a new force pressuring the old elites. The Prussian Field Marshal Helmuth von Moltke, hero of the German wars of unification, warned of the day when elites no longer decided the fate of nations unencumbered by public opinion.

Wars would last longer, making a settlement harder to achieve, he said. If it had been the 18th century Germany and France might have sued for peace in September 1914, when their war was stalemated.

Also contributing to the catastrophe was a now-vanished sense that war was good for nations and peoples. Authors such as Heinrich von Treitschke who preached social Darwinism and the law of struggle were popular at the time.

Friedrich von Bernhardi, whose book “Germany and the Next War” came out in 1911, held that “this desire for peace has rendered most civilized nations anemic and marks a decay of spirit and political courage.”

He called war a “biological necessity.” War was “manly,” capable of both cleansing society and uniting it in a common sense of purpose. This line of thinking was to be found in all the soon-to-be belligerent countries, including the United States, where Theodore Roosevelt and others held similar views.

What makes some end-of-conflict negotiations successful and others not?

The Treaty of Versailles, some say, was doomed to failure because the Allies asked too much of a prostrate Germany in reparations, thereby abetting the rise of Hitler. Others say German militarism had not yet run its course. Hitler did not invade Poland because of the failures of Versailles, although it was a godsend to his propaganda.

Others say that the Allied victory had not been decisive enough, that Germany remained too strong. And certainly the armistice of November 11, 1918 was an armistice, not to be repeated in World War II when unconditional surrender was demanded of both Germany and Japan.

In more recent times, the Good Friday Agreement that brought peace to Northern Ireland has been successful because both sides, Catholics and Protestants, agreed to put their quarrel in abeyance.

But both the British government and the Irish nationalists saw that years of fighting and terror were not producing victory, so both agreed to let the struggle go on through political channels rather than armed conflict.

The can containing a final solution has been kicked down the road to be settled in the future.

South Africans came to an agreement on who rules whom only when one side, the white minority, agreed to hand over power to a black majority — a very rare phenomenon short of war. It took Nelson Mandela to heal the wounds of apartheid, but credit also goes to F.W. de Klerk and his government, which realized that apartheid was unsustainable and relinquished power.

The quarrel for land and sovereignty between Palestinians and Israelis has now become a question of re-partition, of ending the occupation of lands which Arabs ruled before the 1967 War, with, perhaps mutual land swaps to make up the difference. But the Palestinians have not yet produced a Nelson Mandela, and Israel today has no de Klerk.

It takes nothing away from Richard Holbrooke, who banged enough heads together at Dayton, Ohio, bringing an end to the Bosnian wars of the 1990s, to suggest that peace came about only because Bosnians, Croats and above all Serbs had already decided that their wars were getting nowhere and that a peace agreement should be sought.

Today the world strives to reach an end to the Syrian civil war, a conflict as intense as the Great War in microcosm, and already becoming a regional conflict.

But the second round of negotiations taking place in Geneva, Switzerland, have ended without success because neither the government side nor the rebels have a clear understanding of what the negotiations are about.

For the rebels, it is a matter of negotiating a smooth transfer of power in which Bashar al-Assad exits and the rebels enter. But for the government it is no such thing.

The government is not willing to concede Assad’s demise – at least not at this stage. Therefore talks have been at the margins, dealing with such matters as local cease-fires, getting refugees out and aid in to embattled areas.

Another failing of the Geneva talks is that not all the rebels are represented. The jihadists are not at Geneva, which is a little like talking about the future of Russia to Aleksandr Kerensky in 1917 with Lenin outside in the snow.

Unlike the Paris Peace Conference of 1919 not all the major players are involved. There is no Iran at the table, and there is little chance for an agreement without Iran’s say so.

But most important, there can be no agreement until either one side defeats the other, or until all sides decide they cannot achieve their goals by war, as happened in the Balkans in the 1990s.

Today neither side has given up hope of a military victory, and until that happens the killing will continue. That is why the Great War ground on for so long.

Could the calamity of 1914 be repeated today? Some see a resemblance in China’s rise and wanting to expand as Germany did, challenging the US as Germany once challenged England, with Japan as France and the Pacific Rim countries playing supporting roles.

Margaret MacMillan blamed the First World War on a “lack of courage to stand up to those who said there was no choice left but to go to war. There are always choices,” she wrote, and those are the choices left to be made in this century.