Ending the age of AIDS: What the U.S. can learn from Namibia 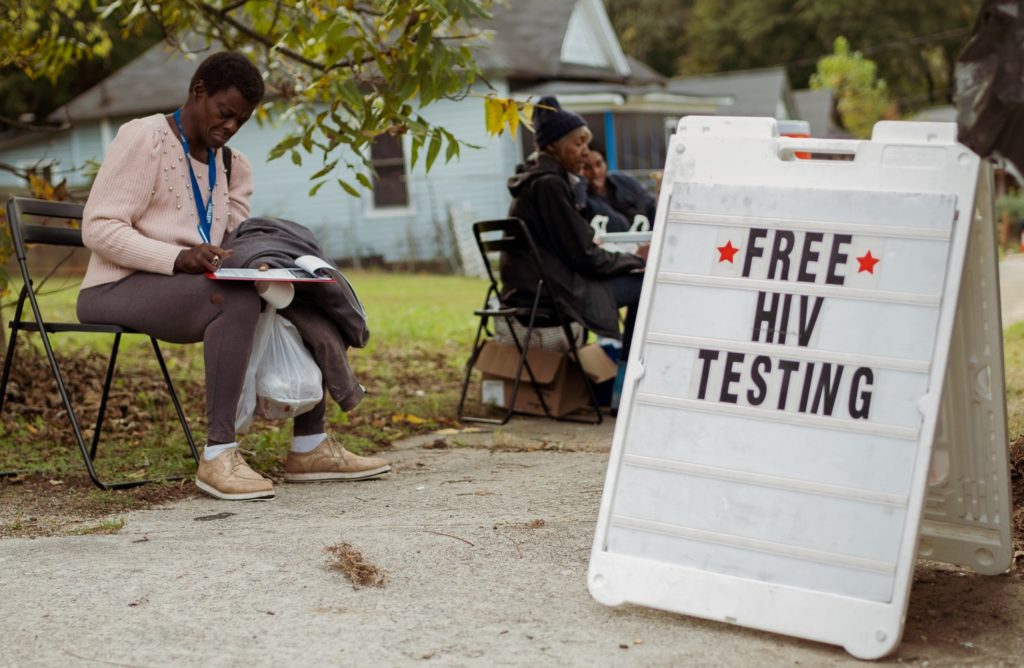 Clotele Davis waits for a free HIV test at Atlanta Harm Reduction's weekly needle exchange and mobile testing event. The CDC estimates the lifetime cost of treating one HIV patient is more than $400,000 and that people who inject drugs are five times more likely to enter substance abuse treatment if they use a needle exchange. (Photo by Asha Stuart/GroundTruth)

By the time the young man arrived at Dr. Jonathan Colasanti’s office in downtown Atlanta, he had already visited numerous emergency rooms across the city, complaining of pain and abscesses around his tailbone. Despite undergoing copious tests, no one could determine the cause. It was only when he went to a leading medical center where Colasanti works that someone thought to test him for HIV. The results came back positive.

“In my office the first day, he broke down and cried,” says Colasanti, the associate medical director of the Infectious Diseases Program at the Ponce de Leon Center, one of the largest HIV clinics in the U.S. “He was feeling kind of ashamed and discriminated against.”

Like many of Colasanti’s patients, the young man, in his early 30s, is African American and has sex with men. Along with transgender women, this group makes up the majority of the 6,200 patients who visit the Ponce de Leon Center each year from around the state. Many of the patients who come there have nowhere else to turn. “A lot of these kids come from families that, when they…find out they’re gay, kick them out of the house,” Colasanti says. “They may engage in [risky] types of behaviors that they wouldn’t otherwise engage in so that they can get a roof over their head.” The center’s broad offerings—including primary care and mental health services, an onsite pharmacy, housing, childcare, and transportation for visits—are critical to addressing Georgia’s HIV crisis, but outliers in a state where poor access to health care is a longstanding problem.

The U.S. has played a leading role in the global HIV/AIDS response; bipartisan political support has led to the funding of multinational efforts to detect, prevent and treat the disease and the U.S. works hand in hand with developing countries to bolster health care access. But the situation in Atlanta shows how the U.S. still struggles to control the epidemic at home, particularly in certain pockets of the country where stigma and poor access to health care impede prevention and treatment.

Across the U.S., more than 1.1 million Americans are living with HIV, with about 39,000 new infections every year. Black gay and bisexual men are most affected, and Southern states account for more than half of new HIV infections annually, even though they’re home to only 38% of the country’s population. Georgia had the highest rate of new HIV infections of all the states in 2017, the year for which the most recent data is available. In the Atlanta metro area, the rate was even higher.

Dr. Carlos Del Rio, professor of medicine and global health at Emory University in Atlanta and co-director of the Emory Center for AIDS Research, says there hasn’t been enough political leadership in the city to address the issue. It’s complicated by the fact that Atlanta has no city health department; instead, the health departments of 10 counties have jurisdiction over public health in various parts of metro Atlanta, requiring them all to coordinate efforts across an area with nearly 5 million people.

Georgia’s growing HIV crisis stands in contrast to gains made in far less developed parts of the world that have shown political will to fight the disease and have been aided by U.S. and global funding enabling them to expand HIV prevention and treatment services in places where they are needed most. In Namibia, for example, the HIV incidence rate among adults decreased by 50% between 2012 to 2017, thanks in part to a strategic expansion of HIV prevention and treatment services based on targeting hard-hit areas and advocacy work by the country’s first lady Monica Geingos, who is a UNAIDS Special Advocate for Young Women and Adolescent Girls.

Namibia is only one of six countries to reach global “90-90-90” targets for 2020 set by UNAIDS, the Joint United Nations Programme on HIV/AIDS. That is, 90% of people with HIV in Namibia know their status; 90% of those diagnosed are on treatment; and 90% on treatment are virally suppressed, meaning they can’t pass the virus on to someone else. The U.S. trails behind, by contrast, at 86-74-83. Namibia’s progress is especially impressive given that, with almost 12% of adults aged 15-49 living with HIV, it’s still facing one of the highest HIV prevalence rates in the world.

In Namibia, women and girls are at higher risk of getting the disease than men. Like gay men and transgender women in the American South, they face social vulnerabilities that increase their risk. “They don’t have the same income-generating opportunities and because of that they fall into unhealthy sexual relationships,” says Roseanne Kahuure, lead field manager of a program called DREAMS that the U.S. Centers for Disease Control and Prevention (CDC) helps implement in Namibia and 14 other countries, the majority in Africa. “Because of that they are more at risk of violence. And as soon as a girl is at risk of violence, she’s at risk of HIV.” She may be too afraid to insist on protected sex, for instance, or to go to the health clinic for preventative care.

Part of Namibia’s success is due to its community-centered approach, through programs such as DREAMS, which works to reduce new HIV infections by addressing the risk factors, like poverty, gender inequality and lack of access to education. DREAMS launched in Namibia in 2017, funded by the U.S. President’s Emergency Plan for AIDS Relief.

Day after day, Kahuure and her colleagues hit the streets of Namibia’s capital city, Windhoek, to talk to young women and encourage the girls to spread the message of HIV prevention among their peers. They also engage the women’s parents or caretakers on the importance of HIV education. The program has proven to significantly decrease new HIV diagnoses in many other African countries where it has been implemented, and was expected to reach over 15,000 young women in Namibia in the last year alone.

“What you had happen in a lot of these places in Africa when things started to go right is they tried to get the community involved, which we’re trying to do here as well,” Colasanti says. For instance, his center in Atlanta is considering the community’s input when designing and implementing programs, and making a concerted effort to hire more individuals living with HIV to help with such jobs as assisting patients cope with their initial diagnosis and educating patients on the health care they will receive.

The U.S. may also be stepping up its political commitment on the domestic front. President Donald Trump requested $291 million in the fiscal year 2020 budget for a new HIV initiative that he announced in his most recent State of the Union address. While the overall fiscal budget is still being hashed out in Congress, if the effort—which has bipartisan support—is funded, the first phase will focus on geographic hotspots with the highest number of new HIV cases, including four Atlanta counties, and provide them with resources, expertise and technology.

The “initiative is based on many of the same principles that we utilize and apply internationally,” including in Namibia, says Dr. Catherine McLean, the CDC’s associate director for Southern Africa. These include using high-quality data to determine the most impacted locations and groups, and then working closely with local governments and communities to establish targeted programs.

These resources and expertise are much needed in places like Atlanta. Colasanti says most of his clinic’s patients live at less than two times the federal poverty level, and there are high rates of substance use, mental illness, homelessness and food insecurity. Structural and systemic issues also make providing care a struggle. There are too few nurses in his clinic to handle the patient load, for one. Help may be on the way: Last year, Atlanta earmarked $100,000 for HIV programs, its broadest allocation of city funds to fight HIV/AIDS, and this year Atlanta’s mayor appointed the city’s first-ever chief health officer, in part to focus on reducing new HIV transmissions.

While many welcome the proposed national HIV initiative, those on the front lines of the response point out that some of the Trump administration’s efforts run counter to ending the epidemic, such as supporting policies that allow discrimination based on sexual orientation and rolling back expansion of Medicaid, which is the largest source of insurance coverage for people with HIV. Despite the need, Georgia has not adopted expanding Medicaid.

“I question an administration that says we are committed to ending AIDS, but at the same time is putting all sorts of restrictions on LGBTQ people,” says Emory’s Del Rio. “Those are the most affected individuals and if we’re going to be stigmatizing and making their life difficult, we’re not going to be able to end the epidemic.”

That said, he says the initiative is a move in the right direction. “If we do this appropriately, we’re going to make a difference,” he says. “And sometimes making a difference starts by taking the first steps, right?”

Juhie Bhatia is a Senior GroundTruth Fellow. Patrice Howard and Asha Stuart contributed reporting to this project, which was produced by The GroundTruth Project, and made possible with support from the Solutions Journalism Network.

A version of this story appeared on TIME on November 29, 2019