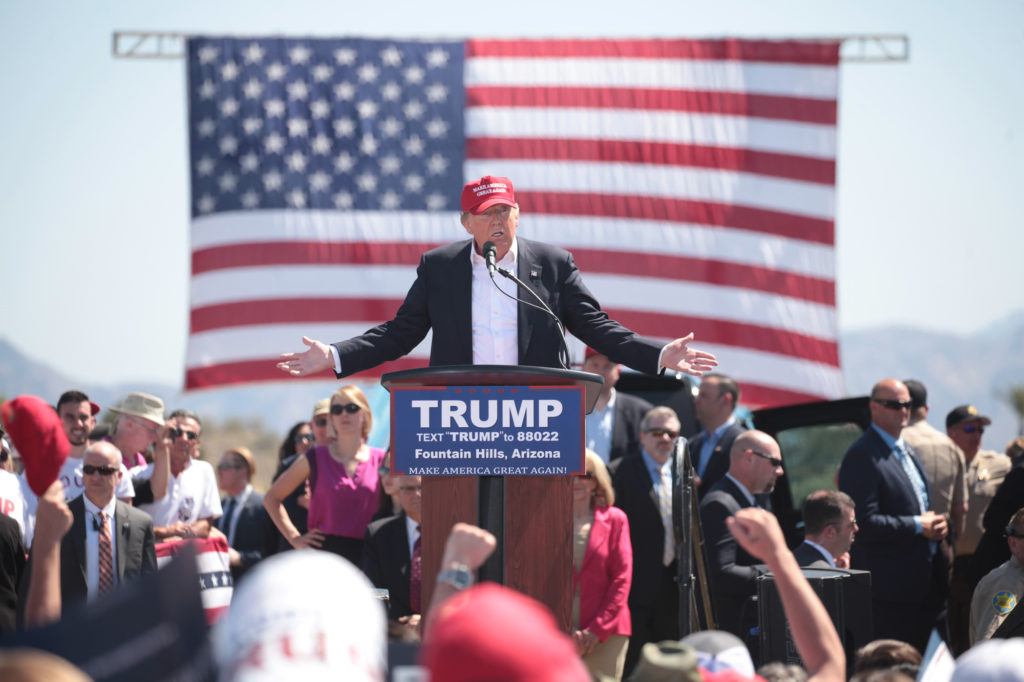 President-elect Trump questioned the One China Policy earlier this week, stating that he's not sure why the U.S. has to honor it. (Gage Skidmore/Wikimedia Commons)

Trump might’ve made a foreign policy mistake that doesn’t reduce nuclear threats from North Korea or resolve issues around trade and the South China Sea.

It’s been a bad month for U.S.-China relations. A Chinese navy warship seized an American drone underwater in the South China Sea yesterday, for one. And President-elect Donald Trump showed his cards for the next term when he questioned the One China Policy — which says that Taiwan is part of mainland China, not a sovereign country — trying to create a bargaining chip against North Korea.

China is North Korea’s strongest ally, especially when it comes to keeping the North Korean economy afloat – 70 percent of the DPRK’s trade came from China, for example, and more than $6.8 billion was exchanged between the two countries in 2014.

On Monday, Trump suggested that China should leverage its relationship with North Korea for the sake of denuclearization, but he also alluded to using the One China Policy as a way to make that happen.

“I don’t know why we have to be bound by ‘One China’ unless we make a deal with China having to do with other things, including trade,” Trump told Fox News.  “… You have nuclear weapons and China could solve that problem, and they’re not helping us at all.”

The incident happened shortly after Trump’s contentious phone call with Taiwanese President Tsai-Ing Wen earlier this month, which already put stress on U.S.-China relations (though responses from Chinese officials were fairly restrained). And tensions may be further escalating as China arms its seven artificial islands in the South China Sea, despite President Xi’s previous assurance to the United States that he’s not looking to militarize the nation.

But here’s the thing: the One China policy is basically a prerequisite to any U.S. relationship with China at all, so threatening to undermine it as a way of getting the country to do anything – let alone put pressure on North Korea – doesn’t make much strategic sense.

“Let’s just call it ambitious to think that the Chinese would be willing to make that concession,” said Scott Snyder, a senior fellow for Korea studies at the Council on Foreign Relations in Washington, D.C. “Trump is starting out by highlighting an issue in which the Chinese are going to have no room for compromise. There’s a risk that the Chinese will go into non-cooperative mode on many other issues of interest to the U.S.”

But for decades now, the policy has been the foundation of a normalized U.S.-China relationship, ever since President Richard Nixon established diplomatic relations with China in 1979 – in part a strategic move against the Soviet Union. The U.S. also created informal, “non-diplomatic” connections with democratic Taiwan, which has continued without major ultimatums from the Chinese government over the years, though they weren’t exactly happy about the U.S. government’s $1.83 billion arms deal with Taiwan last year.

That aside, the claim that China isn’t “helping us at all” with the denuclearization of North Korea isn’t true. In fact, one of the few things the U.S. and China has agreed on is the desire to stop a nuclear DPRK. But China’s strategy is fundamentally different, and that’s because there are different things at stake – if North Korea destabilizes, they will have a hostile border on their hands, an influx of refugees and increased American influence in their backyard, given South Korea’s close alliance with the U.S.

“It’s akin to how the U.S. viewed Cuba as an ally to the Soviet Union near its border – too close,” Snyder said. “China wants to see stability and, even though they have leverage, they have leverage that they can’t use without suffering negative consequences themselves.”

The worry comes from a suspicion that the U.S. government, a major competitor, wants to keep tabs on China or even see its downfall. Plus, in the event of a collapsed North Korea and a ruling Seoul, there’s no guarantee that U.S. troops wouldn’t be dispatchable from the Korean peninsula – which would matter if Taiwan and China ever fought over sovereignty.

“It’s all a perception of strategic positioning. I don’t think the U.S. wants to fight a war with China, but military capabilities always have political effects,” said Alan Romberg, a distinguished fellow and director of the East Asia Program at the Stimson Center in Washington, D.C. “In that situation, they obviously don’t want the U.S. to have advantages.”

That’s not to say that China’s relationship with North Korea is perfect. They’ve been politically strained since 2006, when North Korea launched its first nuclear tests, and the latest set of U.N. sanctions put a number limit on how much coal China and other nations can buy from North Korea (though that rule is currently only regulated by government self-reporting).

Either way, China has indeed taken measures against North Korea in the past, and those measures are growing in tandem with North Korea’s nuclear progress.

“The China-DPRK economic relationship comes under more pressure every time the DPRK starts a nuclear test,” Snyder said. “China is told to cut their ties with them, but they essentially can’t.”

It is true that China’s current strategy relies on the premise that North Korea isn’t “suicidal enough” to use nuclear weapons against the U.S. or other nations – a dangerous assumption, according to Romberg. It’s in the best interest of both parties to stop a nuclear threat, he says.

“What we need to do with the Chinese today is work together to find the day where we get anywhere near that situation,” Romberg said. “[The U.S.] really needs to lay out the game-changing nature of when, not if, North Korea develops the capability to deliver a nuclear weapon.”

But in order for that to happen, the U.S. and China will need to be able to talk in the first place.