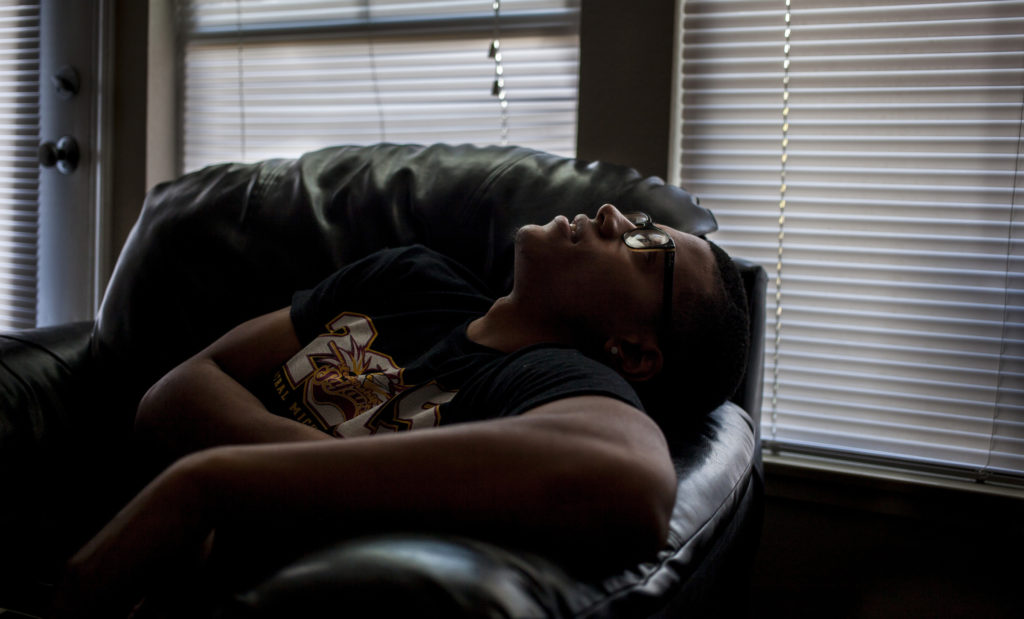 Trenton Carson relaxes in his apartment as light filters in through the blinds. Carson doesn't let micro aggressions bother him because he says, “People who aren’t black don’t see what we go through… because people don’t want to." He goes on to say. “We’re all uncomfortable in this world… only thing that’s different it where we come from.” (Photo: Josephine Norris/GroundTruth)

Those on the outside looking in will never fully understand what it means to be a black man in the United States.

“People who aren’t black don’t see what we go through… because people don’t want to. It’s a touchy subject… We’re all uncomfortable in this world… only thing that’s different is where we come from,” shares Central Michigan University student Trenton Carson.

Through the eyes of students Deontè Gardner, a Chicago native who is also known as the rapper Cassius Tae; Ray Golden, Jr., California native, football player and aspiring civil rights attorney; Aaron Johnson, music student and emerging activist; and Trenton Carson, graphic designer seeking acceptance; we are offered a glimpse into their worlds. Their experiences often boil down to the desire for acceptance.

“The hardest part of being a black man in America is not knowing who accepts you and who does not,” Golden, Jr. says.

One of the numerous disparities that black men face is education. In Michigan public universities, including Central Michigan University, African American students are in the minority.

“The more education I have the heavier the burden becomes. The more aware I am of how far we are behind,” says Golden.

These students are living their own versions of the black male experience and trying to belong as they live in the complex realities of being black in America. They strive to be tomorrow’s leaders and are, as Cassius Tae sings, “tired of waiting on these things round me.”

I have always been a curious person. I naturally want to learn about people who are different than I am and that has been invaluable to me professionally and personally. I’m particularly passionate about racial justice. Some of the most important people in my life are people of color and I have been a front-seat witness to injustices they’ve experienced.

Everyone has a gift or tool that they can use to enact change and I believe the camera is my tool. But I wasn’t sure where to start to speak out on racial injustice. I wanted to know more and began talking with those around me as they intimately shared how their daily experiences are affected by the color of their skin. Four of which were fellow students at Central Michigan University.

I got the chance to speak with and show some of the experiences of fellow students Deontè Gardner, Ray Golden Jr., Trenton Carson, and Aaron Johnson. They all show a chance to share what they go through. Having multiple backgrounds but similar experiences showed how the world around them affected their lives because of who they are as people of color.

As a white woman it was paramount for me to acknowledge my own privilege. to truly amplify the voices of those I was working with. I really wanted to let them share their stories in their own voices, not mine, as we collaborated to bring their struggles to life.

We used hand writing to give them a direct yet intimate connection and introduction to their experiences.

We are still working on sharing these stories and work with others to expand this work beyond Central Michigan University and would like to continue it for years to come.