ON THE GROUND IN PHILADELPHIA, PA

West Philadelphia businesses work to rebuild after a harrowing year 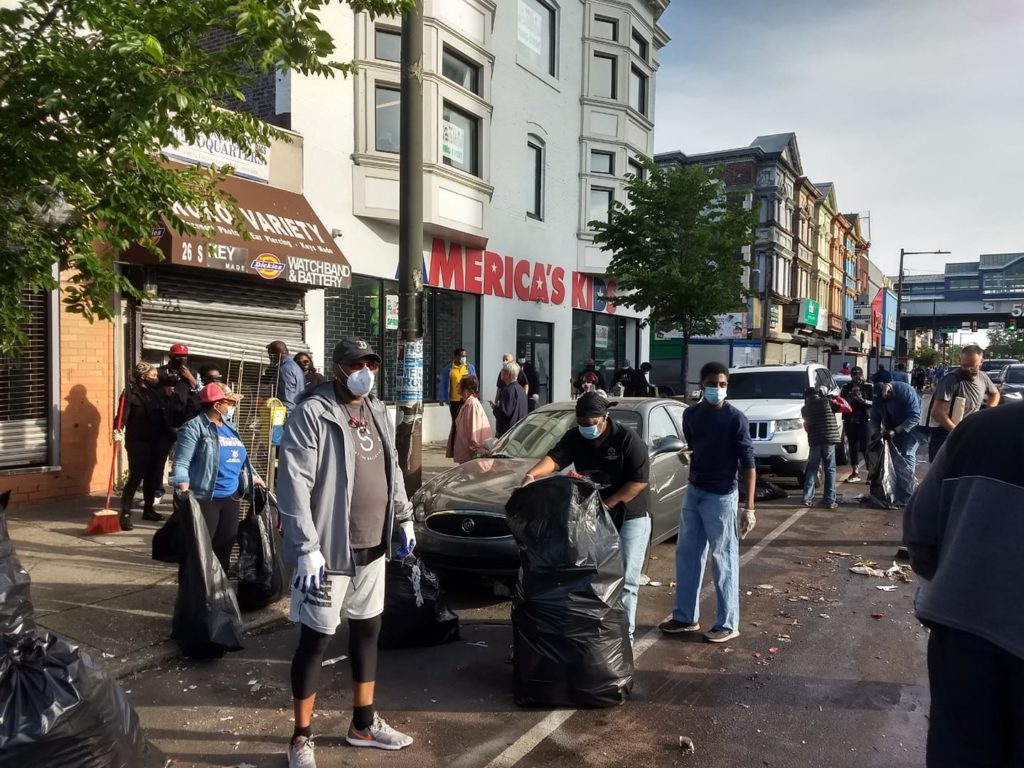 PHILADELPHIA – Around dusk, the peaceful protests and marches that took place in downtown Philadelphia throughout the day morphed into waves of vandalism of local businesses in Center City. The corporate retail stores lining Walnut and Chestnut Streets were damaged, and in some instances ransacked. As the night grew darker and vandals left storefronts a horrid shambles of broken glass and toppled over window displays, a surreal air permeated the city. But the damage was far from over.

The weekend of May 29 was a tumultuous one in cities nationwide. Four days prior, on Memorial Day, George Floyd was killed by Minneapolis, Minnesota police, the latest victim of disproportionate police brutality waged against Black Americans. While national news fixated on protesters taking a stand in Minneapolis in the days that followed, Philadelphia was mostly calm.

That changed on Saturday, May 30.

On the afternoon and into the evening of that Sunday, May 31, small businesses in West Philadelphia were vandalized and looted, adding further hardship for a local economy already reeling from the global pandemic. Unlike the corporate retailers in Center City, 90% of businesses along the 52nd Street corridor are owned by immigrants or people of color.

Ife Abubakr is the owner of Learning Garden Academy, an early learning center for young kids, and one of the 52nd Street businesses damaged during June’s unrest.

“In all reality, you’re tearing your own neighborhood down,” Abubakr said, referring to several West Philadelphia drugstores that were damaged and robbed. “The same ones that do this, their grandmothers and kids are sick. You can’t even go to the Rite Aid for medication.”

The Enterprise Center, a West Philadelphia nonprofit that has worked to support local businesses for more than three decades by providing resources and professional training, organized a neighborhood cleanup. That following Monday morning, after looters damaged 15% of local businesses, the Center saw hundreds of community members help out.

“We’re just out there,” Jesse Blitzstein, Enterprise Center’s director of community development, said at the time. His organization worked to assess the damage done to businesses and properties, and locate and communicate with business owners affected.

The cleanup effort was only the beginning of relief efforts to support local small businesses. In the week that followed, the nonprofit connected with business owners and helped organize a fund with donations from community members for relief to 52nd Street businesses affected by looters or facing property damage.

The tension in a city stunned by police brutality and property damage ahead of an intense presidential election mirrored the circumstances of the Columbia Avenue riots of August 1964 when, three months ahead of the 1964 presidential election, a confrontation between two police officers and a man led to outsized rumors that white policemen had beaten a pregnant Black woman. Over the next three days, 225 mostly white North Philadelphia businesses were looted and burned down, 341 people were injured and 774 people were arrested.

Like North Philadelphia, West Philadelphia has a difficult history with law enforcement that includes the city ordering a bomb being dropped on MOVE headquarters in 1985, and tear gas being used on protesters in June 2020.

The recent looting and property damage following George Floyd’s killing was the latest struggle facing small businesses in West Philadelphia, many of which were forced to close indefinitely at the onset of the pandemic.

“It’s definitely hard,” said Abubakr. “I don’t have good credit. I didn’t get a loan to get a building or supplies. My building didn’t have heat or air conditioning before I opened my business. I worked three jobs with no sleep to pay for the installation. But it was worth it to me. For someone to come tear it down… I worked hard for this.”

Because Black-owned businesses historically lack equal access to capital and entrepreneurial resources, the renewed crisis has amplified the lack of equity Black business owners have in a city with a more than 40% Black population.

The effects of COVID-19 on Black businesses had already set them back, and the property damage made it even worse.

“At any time of the day many businesses have gates down, lights off and are inactive,” said community organizer Jabari Jones, president of the West Philadelphia Corridor Collaborative, an organization that worked to help rebuild local, damaged businesses along the 52nd Street corridor over the last four months. “Many businesses are not allowed to reopen and have suffered seven to eight months without receiving any revenue.”

Boarded up storefronts and masks on the faces of locals were sobering reminders of a “new normal,” a year of economic strife, civic protest and a viral outbreak. And, in West Philadelphia, four months after small businesses were destroyed during social unrest, many are still trying to put things back together.

Then Walter Wallace Jr. was killed by Philadelphia police on October 26. Wallace, who was brandishing a knife, suffered from mental health issues and police officers declined working with mental health professionals to deescalate the situation.

In the days to follow, West Philadelphia saw protests and vandalism of local businesses and theft of their goods. The temperature was a bone-chilling 41 degrees and by the end of the week a 9 p.m. curfew was in place. The trauma of these events was all too familiar.

“Have respect for my family and my son and stop this violence and chaos that’s going on in the city,” Walter Wallace Sr. pleaded the day after West Philadelphia burned into the night. City officials responded by calling in the National Guard and issuing a curfew on Oct. 28 and 30. The curfew lasted from 9 p.m. to 6 a.m. on both nights.

A mural on a vacant building across the parking lot from ShopRite grocery store, also  vandalized, memorialized Floyd and Breonna Taylor, a 26-year-old EMT killed by Kentucky police in her home.

In the middle of the mural, a quote from author Alice Walker served as a reminder of the optimism many West Philadelphia residents have in rebuilding their community. Walker was an activist in the 1960s during the Civil Rights Movement –the last time the country faced this kind of tension.

“Look closely at the present you are constructing. It should look like the future you are dreaming,” the quote read.

Michael Butler covers race, business and innovation for Technical.ly. This dispatch is part of a series called “On the Ground” with Report for America, an initiative of The GroundTruth Project. Follow him on Twitter: @mikeviimusic.