We talked to women at NASA, where one third of employees are female 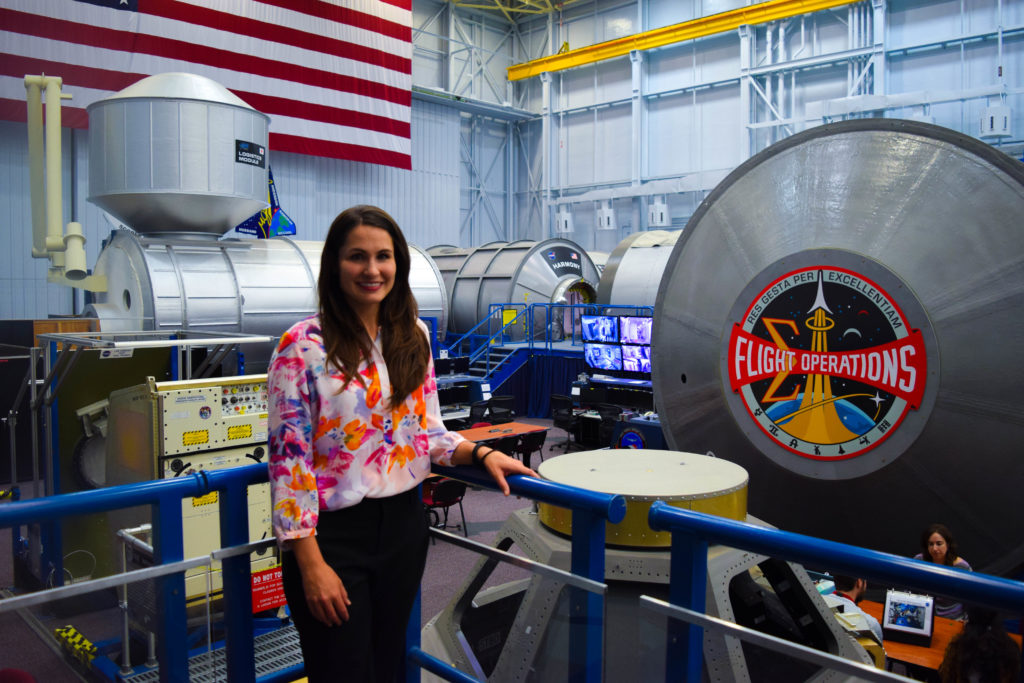 Pam August is the flight operations directorate at NASA. She Manages flight control for astronauts and mechanical maintenance for the space systems. (Photo by Peter Maroulis/GroundTruth)

Twenty-five miles southeast of a massive gathering of 15,000 women and men for the Grace Hopper Celebration of Women in Technology, employees at NASA’s Johnson Space Center are training astronauts to work aboard the International Space Station and – eventually, they hope – on Mars.

How does NASA fare when it comes to gender equality in technology? The evidence shows that the organization founded in 1958 with a nearly all-male staff has improved the ratio and built a more inclusive culture. More than one third of NASA employees are female, and this year NASA selected its first gender-balanced class of astronauts.

The Groundtruth Project’s Women In Tech fellows visited the Space Center to interview women who are shaping the future of space exploration:

How long have you been doing this?

I’ve been here for ten years … I’ve got four flight-controller certifications. It’s basically like going to college, in a way, where you’re just learning and training and doing all kinds of things and figuring out how to do this crazy job.

When did you first decide you wanted to work in this field?

As a little girl, I loved space. I have memories of driving in the car at night, staring up and looking at the stars, thinking, ‘that is so awesome. I want to be a part of that.’ I actually remember sneaking space books, which is so nerdy! So I knew from day one that I wanted to do space stuff.

What kinds of hurdles did you have to overcome along the way?

It’s a little different when you’re a minority going through, I remember in college, I felt like it was one to ten, girls to guys. Here it’s really good, there are lots of girls here at NASA. You sense that, but you just kind of get in there with the team, and you’re part of the projects and everything just like the guys, so it doesn’t take long to get in the credit of the people you work with, if you’re willing to put in the time and effort.

Fifty percent of the most recent astronaut class is women. Is it friendly for women?

What is the importance of having diversity behind space travel?

The more diversity in any type of project, the more perspective you bring and the more ideas, that’s a huge benefit. Also, this seems far-fetched, and a lot will change over time, but you need women astronauts too, especially if you’re going to go colonize a different place to live. You can’t just take guys, you need some girls too.

Did you always know you would work for NASA?

I grew up here, I took it for granted. My friends parents were astronauts and worked at NASA, my parents worked at NASA… I was not going to stay in Clear Lake [Texas], I was not going to work at NASA. I came here because I wanted that type of job, and as soon as I came here, I was hooked on the mission, and feel very blessed that I’m able to walk into this amazing facility every morning and that this is where my job is. I truly have the best job on the planet. The astronauts may think their jobs are the best, but they’re not always on the planet. Mine is the best job on the planet.

What do you do here?

I manage a small office of civil servants who oversee the contractor who operates this facility. We have the technicians that set up and take down in preparation for all of the lessons that go on here, we have engineers who are building and developing mock-ups, where the astronauts come and do all of their physical interaction training for space station, and in the future, for Orion, and the commercial crew vehicles that will be launching in the future.

What do the mock-ups entail?

The procedure you go through when you believe there might be a fire, the procedure you do when you think there might be a rapid depressurization, or a toxic spill… things like that. All of that is practiced in here, and my organization is responsible for making sure that capability exists, and that it’s ready for the instructors when they come in.

When is Orion set to launch?

The commercial crew vehicles are set to be launching in 2018, and so we’ll be starting that training in 2017.

Is aerospace more inclusive for women, compared to other tech fields

It is definitely more inclusive for women. I’m really blessed to be in an organization, specifically the flight operations directorate, that really rewards you on your merits, not on gender. Approximately fifty percent of the management in the Flight Operations Directorate, branch chief, which is my level, and above, fifty percent are women.

What sets it apart?

We require engineering, but you have to be a little well-rounded. You can’t be the person who wants to sit at your desk and design a widget for your entire career. You are doing risk-management, you’re teaching, you’re doing flight control, you’re doing problem-solving… you’re doing all of these other things that require the technical background and the technical engineering, but also require you to be able to communicate and stand up and decision-make and all of these other things that are slightly different than a design engineer. I think this attracts more women, and it is an avenue where more women can be rewarded for their successes.

Tell us about your background.

I graduated from university of Houston-Clear Lake. They actually hired me right there 24 years ago. I have a background in computer graphics and computer information systems, so this was a perfect scenario area to get into, and since I began I was doing simulations and graphics. Eventually we got funded to do VR, and we started building the capabilities since then. I always wanted to build something— I actually wanted to be an architect, but I ended up building the space station in 3d, so that was my dream come true.

I do software development, maintenance of tracking systems, improving them, making them faster and more efficient, working with instructors to get information ready for the astronauts … we do training here, classes that we give, teaching, there is always a lot, it’s a very dynamic group.

Can you describe what you do in the VR lab?

This is an astronaut training facility that uses virtual reality in order to support astronauts for spacewalks and robotics operations. This facility was created over 20 years ago to support space shuttle and space station missions. I’ve been here for 24 years, doing system development, programming and anything in that branch.

We develop not only the graphics and the software, but also hardware. It’s pretty complex stuff.

Tell us about the equipment you’ve helped design.

We built our software and hardware here. We have a 3D model of the Space Station that we have developed throughout the life of the space station, as we’ve designed it and built it. This is actually what we use for training. We have virtual reality helmets here, and we can put two astronauts under the helmets, and they can be immersed in this environment. They both can be doing a space walk and actually going through the activity, seeing themselves in that scenery outside the space station. It teaches spatial awareness. To go into outer space, it’s very complex. No matter how much you prepare, it isn’t conceivable. So seeing it here first, you feel so much more comfortable. We hear this over and over from the astronauts, they feel more secure and more attuned to what they need to do, they feel like they have been here before. That’s why VR is so important now.