We Fear The Water: Flint Residents in Their Own Words 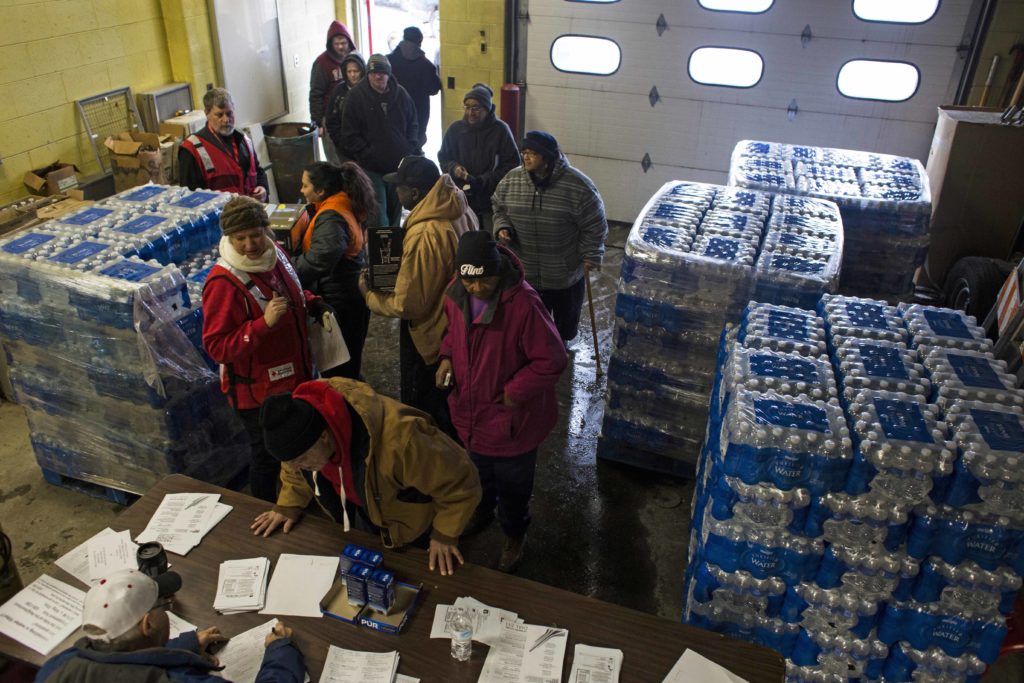 Local residents wait in line to pick up Brita water filters at the Flint Fire Department in downtown Flint on January 15, 2016. Following the declaration for a state of emergency, local fire stations began acting as water resource centers, where residents could pick up water filters, lead testing kits and cases of bottled water. (Brittany Greeson/GroundTruth)

While completing an internship at the Flint Journal in Flint, Michigan, GroundTruth Emerging Photographer Brittany Greeson documented the lives of those affected by the Flint water crisis.

See the rest of Brittany’s photos in a photo essay at The Atlantic, and on GroundTruth.

FLINT, Michigan — Flint is currently under a state of emergency as a result of an ongoing water crisis that has gripped residents for nearly two years. It all began with the flip of a switch in April 2014 as the Flint River — which hadn’t been treated for daily use in over 50 years — became the city’s main water source. The responsibility of treating the water was passed from the Detroit Water and Sewage department to the shoulders of the unprepared and inexperienced local water plant. Government leaders cited a potential savings of around $5 million over the course of two years for a city staring into the face of financial emergency.

Residents say they noticed a change in the water by August 2014. Boil notices for a potential E. coli risk had been sent to neighborhoods. Several people reported seeing their water running brown with a smell like rotten eggs. Notices for trihalomethanes (THMs), a carcinogenic byproduct regulated by the EPA, were sent out by January 2015. However, city officials had violated EPA standards for THMs in the months prior without notice to the public.

Still, there were those who lived in the city’s poorest zip codes, who were regularly drinking the water.

In autumn 2015, through independent testing by a team of researchers from Virginia Tech University and the avid concern of local residents, lead was reported to be making it’s way through the taps — once again without official notice. Keri Webber is a wife and mother to two girls, Victoria, 15, and Stephanie, 20. The family lives in a modest house tucked away just south of downtown Flint. Keri said she and her family had often been suspicious of the water since the switch but the presence of lead never crossed their minds. That was until Keri took the youngest daughter, Victoria, in for a routine doctor’s appointment.

“All of a sudden, in mid-June, they’re asking me how she got lead lines. We had absolutely no clue,” Keri said.

“Then, of course, it was released in late August, early September, in Flint that there’s lead in the water and it started to click.”

Just days before the reports of lead went public, Keri’s husband Michael suffered an eye stroke leaving him nearly blind in one eye. He said he now understands it to be a direct result of his skyrocketing blood pressure, a common symptom of lead poisoning in adults. All members of the family have been diagnosed with lead poisoning. When their tap water was tested by Wayne State University, readings for lead levels reached 183 parts per a billion.

The EPA considers 15 parts per a billion the limit allowable for high risk homes.

Today, the Webber family remains fearful of the water. Bottles of water are used for cooking meals. Empty gallon jugs line the bathroom hallway. Keri washes the dishes wearing surgical gloves as an extra method to prevent further contact. The entire family rotates on a showering and laundry schedule to ensure they aren’t flushing more lead into the home

Victoria is currently waiting to go to a specialist where she’ll find out how much damage has been done to her body. Keri said Victoria has also started showing common symptoms of Post Traumatic Stress Disorder. She won’t touch a meal until she’s sure it’s been properly dried after being washed. When the family visits other towns, Victoria refuses to drink from the tap.

“We have no idea what Vikki’s future holds,” Keri said as she began to cry. “As a parent, you protect your kids from everything. You teach them about strangers, you teach them about crossing the road, you cover them everywhere you can, you protect them from anything that can happen, never dreaming that when we were told to push water through her that we poisoned her.”

On the opposite side of Flint, Jeriesha Dirrell is rinsing a slab of beef with bottled water as she prepares dinner for her husband and six children who live in the home. All six came back with elevated levels of lead in their system. She said the youngest child, 2-year-old Iveon, already exhibited behavioral issues, a common symptom of lead poisoning. She said she feels like her children were robbed of their potential and that only time will tell how much damage has been done.

Children under the age of six, like Iveon and his 3-year-old sister, Journey, are now a primary concern for Flint’s health officials. Timed alongside Virginia Tech’s lead study, Dr. Mona Hanna-Attisha, a pediatrician with Flint’s Hurley Medical Center organized a team of researchers to see if lead was getting into the bodies of young children. Dr. Hanna-Attisha said the evidence she and her team found was jaw dropping.

“What we found was contrary to everything that’s been going on in the country and in the City of Flint. The percentage of children with lead poisoning had increased,” Dr. Hanna-Attisha said. “Here we are in 2016, in the middle of the Great Lakes, and we don’t have access to safe drinking water and we have just given an entire population lead.”

The study later concluded that in the entire city of Flint the percentage of young children with levels of lead doubled. In some neighborhoods it had tripled.

“It took evidence that children were being poisoned for something to happen,” Dr. Hanna-Attisha said. “I’m glad that we were able to share that info but I’m sad that it took so long because there were concerns with this water from the very onset.”

Currently tasked with addressing those concerns is recent mayoral elect Karen Weaver. A Flint native, the ongoing water crisis quickly became one of her campaign focuses as the switch to the Flint river water had occurred under her opponent, now former Mayor Dayne Walling. Weaver said she’s happy for the opportunity to give back to the city and simply wants to see progress. For her, declaring a state of emergency was the starting point.

“I want some money. I want some services and supports for the families that are here because that’s what we deserve. We didn’t create this and we don’t deserve what’s happened to us, so I want to be able to get everything that I can to help the families. That’s what I want.”

Several government officials, those in power during the switch, have resigned. Governor Rick Snyder has called in the Michigan National Guard to assist American Red Cross workers in handing out cases of bottled water and filters at firehouses throughout the City. On January 16, President Obama approved a declaration for a state of emergency freeing up federal assistance. However, some residents, say it’s just a bandaid on the issue. Protests and rallies continue to occur regularly calling for Snyder’s resignation. Those who lack transit still have trouble reaching the firehouses. In peak hours they will often run out of water filters until another shipment comes in. Residents are only allotted one to two cases of bottled water per a family.

Marc Edwards, a civil engineering professor at Virginia Tech, supervised the Flint water study as an expert on municipal water quality. He said the City of Flint remains in uncharted territory and the damage to the infrastructure is a large issue for the future.

“The damage to the pipes and the children is irreversible, we can’t undo what’s been done,” Edwards said. “To my knowledge there’s never been a manmade disaster of this nature before, where the state actually broke federal law and against the protest of people in the city, outside experts, EPA employees, refused to do anything about it for 18 months and so it’s a very unique situation, it’s going to need unique solutions.”