ON THE GROUND IN NEW YORK, NY

‘We are part of this’: Haitian Americans in Brooklyn align with Black Lives Matter 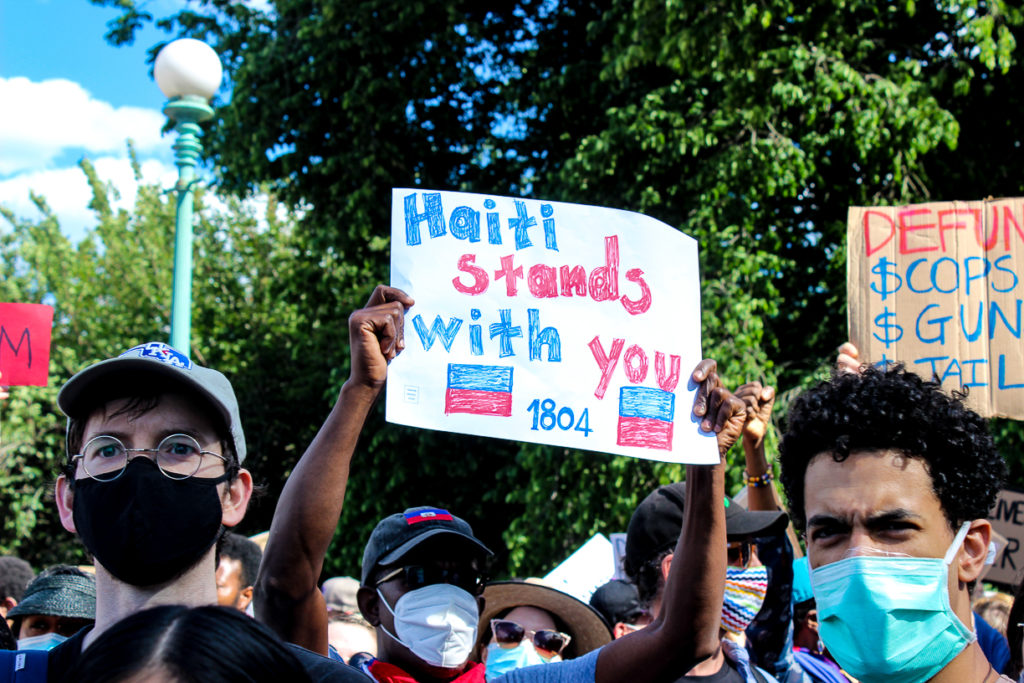 NEW YORK — Protesters donned black on that afternoon a few months ago, as they’ve done for weeks. This time, they also came bearing the bright colors of the Caribbean.

There was the blue, gold and green triband of Saint Vincent and the Grenadines; the Golden Arrowhead of Guyana; and Haiti’s blue and red bicolor, with its coat of arms in the center. Hundreds of people gathered at the corner of Church and Flatbush avenues on June 14 for the Caribbean Americans for Justice march in solidarity with the Black Lives Matter movement.

Protesters marched through the heart of Brooklyn’s Flatbush neighborhood, dotted with roti shops, Haitian bakeries and markets selling everything from dried plantains to sugar cane.

Haitian culture is woven into the fabric that defines Flatbush. And the Haitian community has woven itself into the movement for racial justice and police reform that started in late May after George Floyd died when a Minneapolis police officer knelt on his neck for more than eight minutes.

Haitian Creole, which distinguishes Haitian culture from other Caribbean populations, developed on plantations in the former French colony of Saint-Domingue long before the enslaved African people there defeated the French in a revolution to establish Haiti, the world’s first Black republic in 1804.

While far from the only group in central Brooklyn with a distinct identity, the Creole language helps distinguish Haitian culture from other English-speaking Caribbean populations.

Demands in the Haitian community in the wake of George Floyd’s death are diverse. Before New York City agreed to reduce the police department budget this summer, Pierre had called for a $1 billion cut, with more money allocated for programs like Summer Youth Employment, which he said benefit youth of color.

He also said the police department’s leadership does not reflect the city’s diversity. More than 75% of officers above the rank of captain are white, although white people make up a minority of patrol officers.

NYPD Lt. Claude Celestin, who serves as president of the Haitian American Law Enforcement Fraternal Organization, estimated that more than 600 Haitian police officers work in the department, a force of about 36,000 uniformed personnel.

“As far as minorities joining the police department, there’s been a lot of progress, but I think there’s a lot more that can be done,” Celestin said.

Other community members want to see investment in Black communities, to alleviate the structural inequities that have existed since slavery.

“We need reparation in general for slavery and colonization; this is what the discussion is about,” Blanc said. “I’m not interested in just defunding the police.”

Black Americans, immigrant or not, face the threat of being singled out and mistreated by law enforcement based on skin color, according to Black Lives Matter Brooklyn President Anthony Beckford, who has Jamaican ancestry.

A history of mistreatment

As Haitians established themselves in New York, they too became victims of police brutality. In 1997, police in Brooklyn brutally assaulted Haitian immigrant Abner Louima while he was handcuffed. Other cases include the deadly shooting of unarmed Patrick Dorismond by an undercover detective in 2000 and the lethal 2002 shooting of Haitian immigrant Georgy Louisgene, a Flatbush resident.

Communities of Black immigrants have come together in the past to protest police brutality. But now the solidarity is more widespread, more visible.

“Now, people are like, ‘yeah, this is getting out of hand, it’s affecting us all.’ I believe George Floyd awakened a spirit among everybody,” Beckford said.

And people attending the march for justice, holding signs bearing names like George Floyd and Breonna Taylor, said their demands are simple.

“We all just want to go outside, live our lives and be peaceful, and we don’t want our skin color to be weaponized against us,” said Jeff Paul, a Haitian American protester.

The protesters that day represented many countries, but they all shared a common cause.

“We are in lockstep with our African American brothers and sisters on this,” Pierre said.

Sam Bojarski covers Brooklyn for The Haitian Times. This dispatch is part of a series called “On the Ground” with Report for America, an initiative of The GroundTruth Project. Follow him on Twitter: @sambojarski