During a water crisis, residents embrace reporters as allies 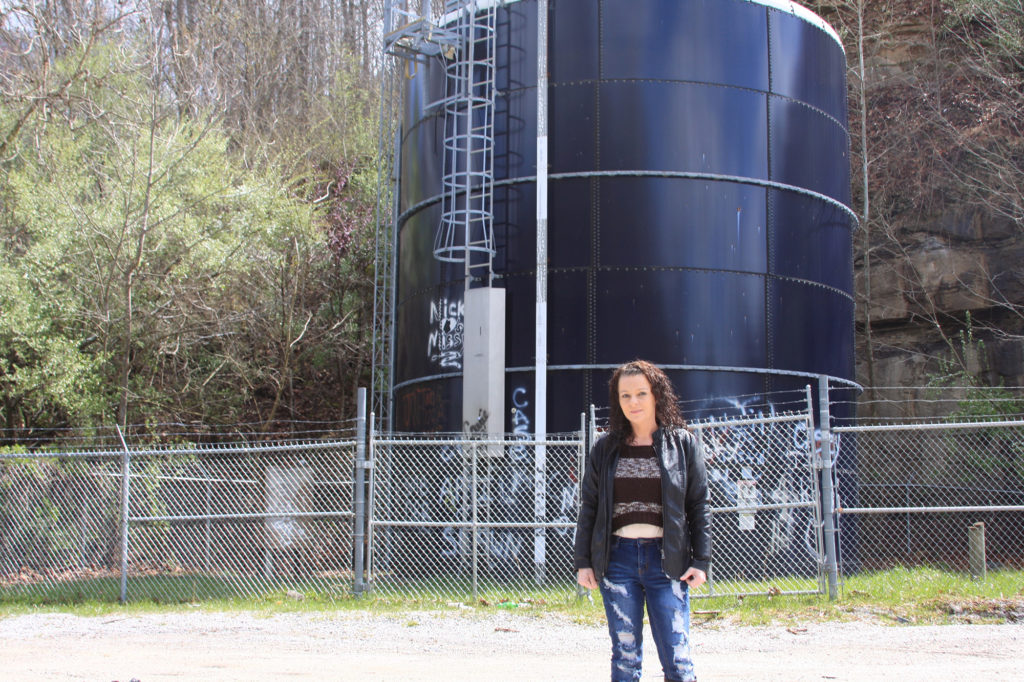 BarbiAnn Maynard, a Martin County resident and an activist for clean water, stands in front of a water storage tank. (Will Wright/Report for America)

INEZ, Kentucky — In this sleepy town in rural Martin County, in the heart of coal country, residents endured weeks without running water in the dead of winter, a local crisis that went largely unnoticed outside of the hills and hollers of this community.

That is, until their plight was picked up by local reporting here, with regional media, including the Lexington Herald-Leader, running stories on the crisis that revealed concerns about the district’s financial and operational stability.

Eventually, national media outlets including CNN, weather.com and the Los Angeles Times jumped in. And as the story unfolded, some residents even got a sense that — despite the way it is often maligned these days — journalism can actually play a role in affecting change in local communities.

I was recently assigned to cover Eastern Kentucky for the Herald-Leader as part of the Report for America initiative, and I’ve been writing a series of articles that explore the lack of access to running water this winter along with other complaints.

Residents posted videos showing that the water was discolored, coming out the tap looking like beer or milk. Others complained of rashes they believe were caused by bathing in the water, and illnesses like cancer that residents attribute to a long history of chemical contaminants in the water.

The district has refuted many of these claims, saying the water is safe to drink and that the district is now in compliance with all federal quality regulations. But the district also admitted to poor financial management that led to systemic disrepair in the county’s water system and led to the district business manager stepping down, or taking “early retirement,” as the district officials prefer to call it.

The water crisis began in January with a string of frigid weather that froze service lines and shut down an intake pump that funneled water to the district’s treatment plant. The district had a backup pump, but because of its poor finances, couldn’t afford to get it out of the shop.

The district was then forced to shut off water to many of its customers while it filled storage tanks, hoping to restore pressure, but many residents went without running water for much longer than originally proposed by the district. Some say they went as long as two weeks without access in January, making it difficult to bathe, cook and care for elderly relatives and children.

In one public meeting held by county officials to address the growing crisis, tempers flared.

A resident cursed as he criticized the district, and a Kentucky State Police trooper grabbed him by the throat and removed him from the building.

Since then, some vocal residents have continued to criticize the district both online and at public meetings, saying they are paying the price for a long history of financial mismanagement and government waste.

In a Facebook post, the district announced that it had fallen more than $800,000 in debt that it could not afford to pay back. Officials later said the district was just weeks away from financial collapse.

But as reporters stepped in to ask questions and report on the community, hope for change began to materialize.

“For the first time in many, many years, the people of Martin County have hope,” said BarbiAnn Maynard, a citizen activist who has been critical of the water district, in an article for the Lexington Herald-Leader.

Another Martin County resident, Tangerie Mollette, said her friends and family “would love to see as much media as possible because maybe they’ll get the ball rolling.”

Media coverage continued along with questions by state regulators, who threatened to force the district to merge with a nearby utility if problems persisted.

The district got approval for a 28 percent rate hike in March, creating revenue that will be used to pay back its debt and make much-needed operational repairs.

It also was awarded millions of dollars in grant money that it will use to fix the crumbling infrastructure that led to January’s water crisis.

Despite the narrative that people in rural areas, especially Appalachia, are untrusting and even hostile to media and outsiders, many residents in Martin County proved the opposite.

Many folks who were critical of the district said on a Facebook group, the Martin County Water Warriors, that the more media coverage they can gather, the better.

Reporters post on the group asking for sources and information, and residents are often quick to jump at the chance, speaking for interviews and giving tours of the county to reporters from out of town.

While members of this band of vocal critics are not representative of all of Martin County, let alone all of Appalachia, their willingness and generosity toward media discredits stereotypes of “Trump Country” — nearly 90 percent of voters in Martin County cast ballots for Trump in the 2016 general election.

As a reporter for the Herald-Leader and a corps member of Report For America, I have been greeted in this region with far more hospitality than distrust or resentment.

People of all backgrounds and political beliefs want, at the very least, to be heard and to be taken seriously.

In Appalachia, an area too often stereotyped and viewed by some outsiders as cartoonishly regressive, it is possible that that feeling is even more acute. For many years, people here have not felt heard.

In January, during the water shutoff in Martin County, I stood in the rain outside a community center and waited for Maynard, the citizen activist, to pick me up. Maynard has organized water drives and as the water crisis got more attention, was an ambassador to out-of-town media. When I met her, before it was a national story, Maynard drove me around the county to meet with families affected by the water shutoff.

I had never met Maynard before, but despite this she took time out of her day to show me the problems she and others in her community had been dealing with, in hopes of being heard. I wanted to listen to their stories and share them with the Herald-Leader’s readers.

The story has evolved in many ways since then, but the hospitality of residents and their willingness to share their stories has not.

Report For America’s mission is to place reporters in areas that deserve more and better local news coverage, and that in doing so, we might restore some trust in journalism.

In at least one rural Kentucky county, the strategy seems to be working.

Will Wright is a Report for America corps member and Galloway Fellow, part of our central Appalachia reporting project, which is made possible by the Galloway Family Foundation. Will is covering Eastern Kentucky for RFA host news organization, the Lexington Herald-Leader.