Watch | How Is India Tackling the ‘Twindemics’ of Monkeypox and COVID-19? NIV Head Explains. 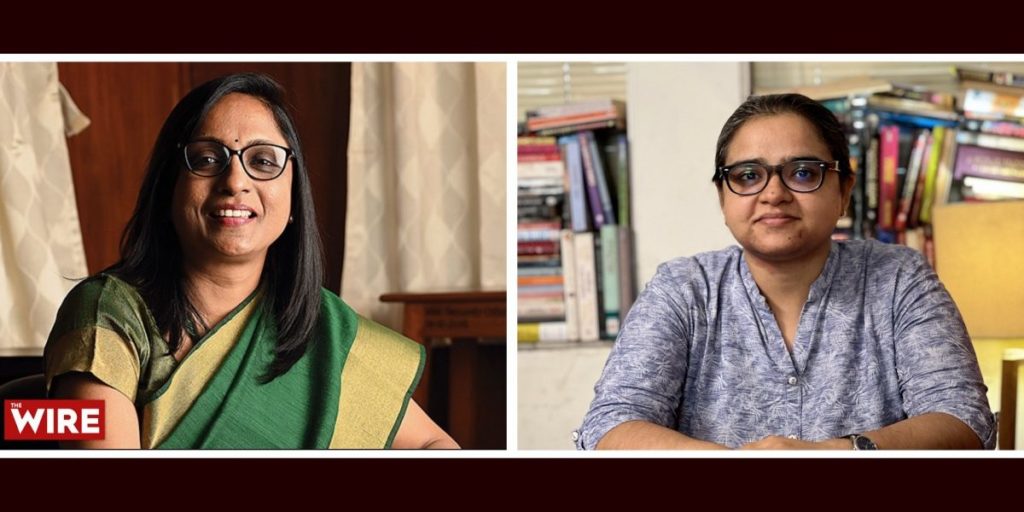 Priya Abraham and Banjot Kaur. (Photos by: The Wire)

New Delhi: On the one hand there is a rise in COVID-19 cases in the country and there is another epidemic – monkeypox – on the other. The Wire spoke about both issues with professor Priya Abraham, the director of one of the apex research institutes of India, the National Institute of Virology (NIV), Pune. The 54-minute interview was divided into two halves for the two subjects.

Speaking about monkeypox, Abraham said all ten cases found in Delhi and Kerala are unrelated to each other. No contact of any confirmed case has tested positive. The fact that they are unrelated, in nutshell, indicates that the virus is very much in circulation in the country. When asked why cases have been detected only in Delhi and Kerala and if it had anything to do with testing bias, she replied, that Kerala’s health system is equipped well to identify any virus. About Delhi, she said it was difficult to say. About 259 samples had been tested till August 23, she added.

She also said that the only monkeypox death in the country so far was very ‘atypical’ as the deceased person did not have classical symptoms of monkeypox. Doctors did not suspect it was a case of monkeypox, he said. The doctors got to know about his infection only after his death.

Doctors have a huge role to play because there are other infections which present symptoms that mimic monkeypox, she said. Therefore, it would be very critical to pick up a suspected case and send them for sampling, Abraham added.

Asked if the government has trained or is considering training clinicians on this front – as it was done during COVID-19 – she said she was not aware of any plans. She added that some doctors’ organisations might already be doing this.

When asked, Abraham agreed with the widely-accepted view that at least contacts of confirmed cases need to receive monkeypox vaccine doses. The professor said though there are other ways to prevent the disease, the government should procure vaccines from abroad. She said the government is thinking about procuring vaccines but no final decision has been made.

At the moment, only a select group of government labs are testing for monkeypox. A scale-up will only be considered depending on the trajectory of cases, Abraham said.

On the rise in COVID-19 cases, she said the present surge is small and that such surges will occur in the future too. Talking about the slight rise in hospitalisation, she said these patients are individuals with comorbidities. If the denominator – cases – goes up, the numerator – hospitalisation – is bound to increase though in a minuscule manner, she said.

She confirmed that various lineages of BA.2 sub-variant of Omicron are circulating in India currently. There has not been a weekly bulletin from India’s genomics consortium INSACOG since mid-July, which would have informed the current dominant variant of the coronavirus. This is the first time that a government official has confirmed that various sub-lineages of BA.2 are driving the surge in India.

The sub-lineages of BA.2 have emerged in India only. No studies on virulence have been done as of now but whatever information is available, it suggests that this sibling of the omicron variant is more transmissible than the previous ones and has immune escape potential, she said.

Since no studies have been conducted, she said, it was not possible to say anything about its virulence – that is, how severe a disease it can cause. Abraham stressed that even if one was previously infected by the coronavirus, the new variant can result in fresh infection, even more than once.

What to expect in the future? Abraham said that given the high two-dose coverage of vaccines in India and a large population having acquired natural immunity through infections, the virus is under pressure to evolve to sustain. Therefore, new sub-variants or sub-lineages of existing sub-variants, or even a whole new variant, can never be ruled out, the virologist said.

There is a general understanding that new variants are milder than previous ones, especially in terms of causing severe disease, as omicron showed. But, Delta was much more virulent than the previous variants of the virus. How can this be explained? Abraham said there was no hard and fast rule. She said while vaccination and natural immunity should make it difficult for the virus to cause severe disease, there was no guarantee that this will be the case.

Only genome sequencing can determine how future COVID-19 outbreaks develop, she said. That is the only way to know if new variants are coming up. Abraham said that currently India is sequencing 5000-6000 samples per month but that is the ‘bare minimum’. She said there was absolutely no scope to go lower than this in a country as large and as diverse as India.

With cases surging, some governments – such as Delhi – have returned to mask mandates. But among the population, mask fatigue is a reality. Yet, masks remain to be one of the most effective tools to prevent infection. Could there be a common meeting ground? Or should administrations devise innovative public health messaging and policymaking to convince people to wear maks? Abraham said that it is up to the people to understand that masks are for their good. So, at least in crowded places or areas that are poorly ventilated, people must wear masks – whether there is a mandate or not.

The messaging around vaccination also needs to change, Abraham said, because people are under the belief that vaccines prevent infections. The science has always been that vaccines are designed to reduce hospitalisation and death, she said. “We have always learnt during this pandemic how to improve. This is the time to improve messaging on vaccines and other precautionary tools,” she said.