‘Washed away by the majority’: Inside Texas attorneys’ long fight for Latino voting rights 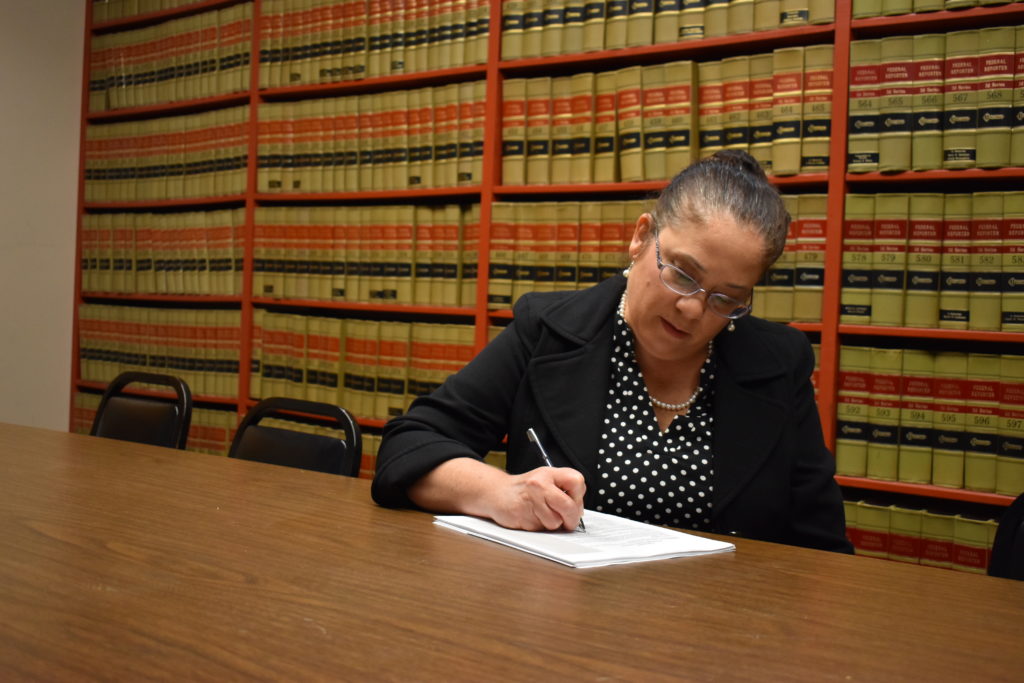 Nina Perales, senior vice president of litigation for the Mexican American Legal Defense and Education Fund, works in the law library of her office in San Antonio. She’s gone all the way to the U.S. Supreme Court to fight for Latino voting rights. (Photo by María Méndez)

“It’s just a constant barrage of emails,” said Nina Perales as she took a moment to forward one.

Perales, Vice President of Litigation for the Mexican American Legal Defense and Education Fund, is accustomed to a litany of emails on various legal matters. But one issue keeps her particularly busy: voting rights.

“Most folks may not tune in to voting until right before it’s time to vote,” she said sitting at her desk in Downtown San Antonio, her office filled with bookcases of law books, photos and accolades. “But if you work on voting rights, there’s always issues that are coming up related to voting and representation and access.”

Perales litigates cases across the country for MALDEF, a non-profit law firm dedicated to representing Latinos nationally, but Texas keeps her especially busy. Courts and the U.S. Department of Justice found Texas to have discriminated against the growing Latino population — on pace to become the state’s majority by mid-2021 — in almost every redistricting cycle since the 1970s, Perales said. Instead of reallocating state or congressional seats to those growing communities, or allowing them to become the majority in an electoral district, she said Texas officials regularly try to dilute the Latino vote.

Texas’ Latino population grew by more than two million over the last decade, and experts predict the state could gain three more congressional seats next year under a complete Census count. But whether Latinos will gain representation will likely depend on the efforts of groups like MALDEF.

Perales is currently focused on litigation over the U.S. Census “because even the Census has a bearing on political representation and on voting rights when it comes to redistricting,” she said. The national count of people living in the U.S. serves as the blueprint for the redrawing of electoral districts, which becomes the geographic basis of political representation at the state and local level, as well as in the U.S. House of Representatives.

“For five decades now Texas has struggled to fairly treat its communities of color in redistricting, and that’s whether Democrats were drawing the maps or whether Republicans were drawing the maps,” said Michael Li, senior counsel for the Brennan Center For Justice, a nonpartisan law and policy institute based in New York. “And every decade for five decades, its maps have at least been partially struck down because it failed to create adequate opportunities for communities of color, and in particular for Latinos, who long have been the state’s fastest growing group.”

Perales’ work is devoted to that fight. In 2006, she went all the way to the U.S. Supreme Court to fight the state’s proposed redrawing of electoral district maps. Perales successfully argued that the representation of Texas’s largest non-white demographic was compromised by how the district boundaries were drawn.

In 2019, MALDEF successfully challenged the Trump administration’s attempts to add a citizenship question to the Census. MALDEF and other groups argued that adding the question would deter non-citizens from participating and discriminate against communities of color, who would lose representation due to an incomplete count.

Because the constitution ties representation to total population, Perales believes she can fight against the Trump administration’s memorandum to exclude non-citizens from redistricting data based on the Census. Excluding non-citizens could cost states like Texas at least one congressional seat and leave non-citizens that pay taxes and other groups without representation.

Lydia Camarillo, president of the Southwest Voter Registration Education Project and one of Perales’ clients, said that everyone living in the United States needs to be represented whether they’re a child, a disabled person, someone who doesn’t have capacity or the immigrant community.

Mexican Americans in Texas have been at the center of a long fight against voter suppression throughout the state’s history.

The Voting Rights Act of 1965 prohibited tests of education or moral character to deny or limit the right to vote on account of race and required states with a history of voting rights violations to get federal approval for election changes.

Although Texas was not one of the states cited for a history of voting rights violations, Mexican American voters in the state continued to face obstacles to exercising their right to vote through the abrupt relocating of polling sites, English-only ballots and electoral districts that diluted their vote.

MALDEF, throughout the 1970s took on cases to challenge redistricting that diluted the Latino vote.

In 1971, MALDEF and other groups sued the state of Texas in federal court over electoral districts, which they argued were drawn to favor white voters. MALDEF’s case centered on a huge district in Bexar County — bigger than 11 other states — which includes San Antonio, an overwhelmingly Latino city.

A panel of federal judges declared districts in Bexar and Dallas counties unconstitutional in a ruling for the consolidated cases. But Texas appealed the decision.

In White v. Regester, the U.S. Supreme Court reviewed the case and ruled that the district in Bexar County was unconstitutional because it decreased Latino representation in the state House of Representatives.

Luis Roberto Vera Jr., a San Antonio lawyer for the League of United Latin American Citizens, calls the Supreme Court case “the grandfather of voting rights” cases because it helped pave the way for the 1975 expansion of the Voting Rights Act. The 1975 Act provided protections for language minorities and election preclearance requirements for states with a history of gerrymandering, like Texas.

Perales, 54, was still in elementary school in the Northeast when White v. Regester was decided. But it remains central to the work she does in Texas today.

The Texas Legislature redraws political districts every 10 years using Census data—a process meant to enable states and cities to equalize the number of people from district to district. Much of Perales’ work today is focused on ensuring redistricting efforts do not restrict the voting rights of Latinos.

In 2011, Perales took Texas to court yet again over new redistricting plans. She got remedies, and is already looking ahead to the next round of redistricting in 2021.

“I am ever hopeful that Texas will learn how to draw fair redistricting lines,” Perales said. “But I’m also prepared, as are so many other voting rights advocates in Texas, to go back to court if the plans are discriminatory.”

María Méndez covers border and business issues from Laredo, Texas for Texas Public Radio. This dispatch is part of a series called “On the Ground” with Report for America, an initiative of The GroundTruth Project. Follow her on Twitter: @anxious_maria