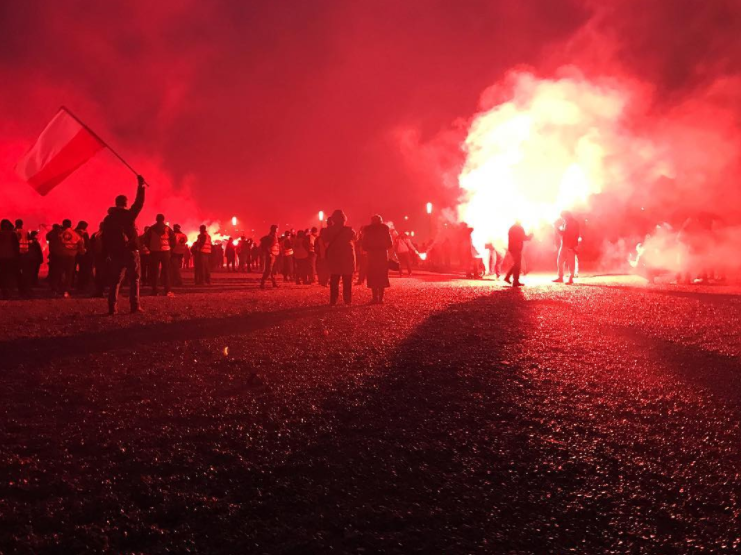 Young people participate in a nationalist demonstration on the country's Independence Day in Warsaw, Poland. (Photo by Karolina Chorvath/GroundTruth)

WARSAW – Last month, an estimated 6 million Poles took to the streets to protest a proposed ban on abortions, supported by the reigning conservative, nationalist Law and Order party (PiS).

The protest was designated “Black Monday,” successfully galvanizing enough opposition to quash the ban. But women in Poland are not celebrating.

The U.S. election of Donald Trump, who has made blistering comments on abortion and women, have particularly scorched a group of young activists fighting for women’s rights.

Klaudia Czerwinska, a 22-year-old actress, stood in the freezing rain with thousands of other women in Warsaw during the Black Monday protests. She said she was terrified to wake up in a world where Donald Trump is the president-elect.

“Every country has its faults, but I do believe the United States, up until yesterday, was a place where you could be sure that if something bad is happening in any other country, the U.S. would stand against it,” said Czerwinska. Now, she worries that Trump’s presidency could negatively impact countries where women are struggling to fight for their rights.

Marta Dziedzic, a 23-year-old animation student, says she’s unsure about how Trump’s policies will play out on a global scale, and she doesn’t feel very hopeful.

“It was very upsetting that he won because I have seen what he preaches, practiced in Poland,” said Dziedzic. “I felt sick to my stomach when I saw the results.”

Polish feminists aired their grievances on social media. Krystyna Kacpura, renowned Polish feminist and director of the Federation for Women and Family Planning in Warsaw, posted a statement on Facebook in solidarity with the International Women’s Health Coalition. The statement detailed the community’s concern that the election of Trump would result in severe setbacks for women and girls around the world.

“This is Black Wednesday,” Kacpura told GroundTruth. “The fight is going to be harder, more tragic, longer and the most difficult.”

However, not all Polish millennials agree that the conclusion of this election was so pessimistic. Like their president Andrzej Duda, who wrote both a letter and a Tweet congratulating Trump on his victory, some are celebrating.

My warmest congratulations to @realDonaldTrump. I am confident US-PL bonds will remain as close & strong as ever. Hopefully even stronger.

Tomasz O., a 28-year-old camera operator who preferred not to be fully identified, said that he thought the election had a good outcome, although he was not completely satisfied with it overall. Like many of his American counterparts, he felt that Clinton was unreliable and believes many people – in both the U.S. and Poland – are fed up with liberal politics and its lack of results.

“Sometimes, [Trump] might sound like a maniac, but at the end of the day, we think he knows what he wants,” said Tomasz O. “He know how to run business, which is the same as running the country.”

But young women like Klaudia and Marta do not share that optimism. They would have much rather seen a win by Hillary Clinton, whose messages spoke directly to them.

That message was visible on Wednesday in Clinton’s concession speech when she said, “Never doubt that you are valuable and powerful and deserving of every chance and opportunity in the world to pursue and achieve your own dreams.”