ON THE GROUND IN WICHITA, KS 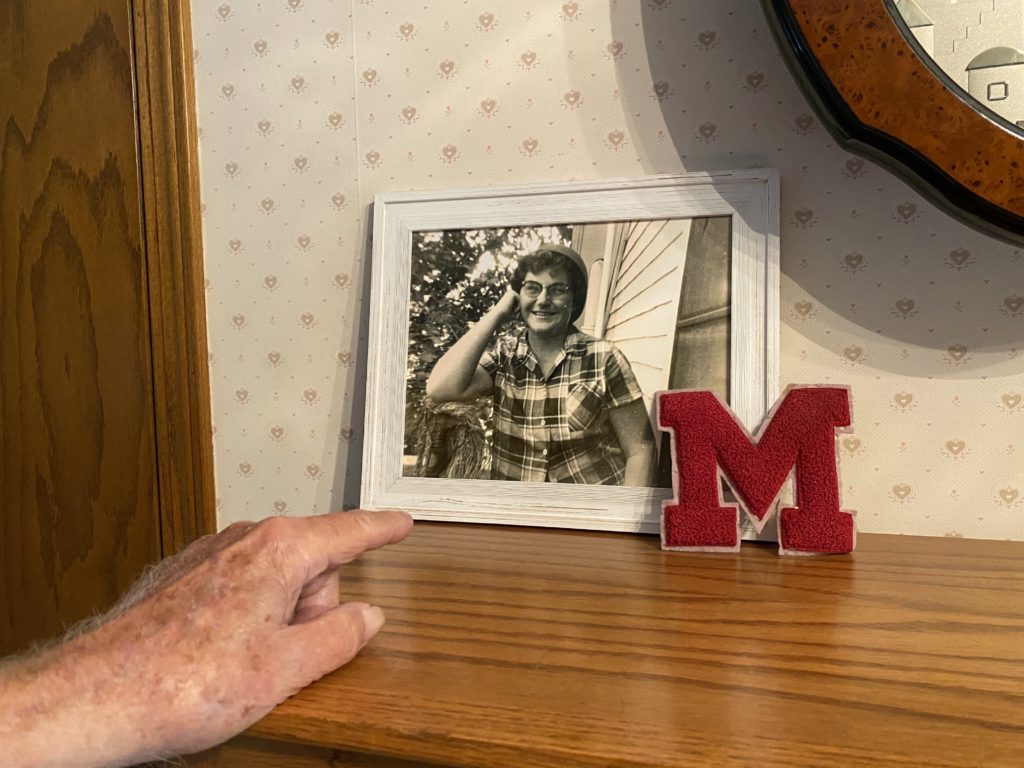 Frank points to a picture of his wife, who is wearing his helmet from his time in the service. She loved the birds and was worried about their disappearance because of climate change and shrinking habitats. (Photo by Sarah Spicer/GroundTruth)

WICHITA — It has been five months since Virginia Soyez died on a Monday in March, but every morning her husband Frank keeps their tradition. He wakes up at 5:30 a.m. — a habit that hasn’t left him since his days as a tank mechanic in the army — and sits in a brown recliner across from its now-empty pair in the sun room. He sips weak coffee from a brown and tan ceramic Fort Scott mug decorated with a sprig of wheat and foregoes breakfast altogether, as there’s no longer anyone to share it with.

Dancing along the wallpaper’s top trimming are cardinals, Virginia’s favorite bird. A wall of windows looks out onto a small backyard with enough room for a birdbath, a red and gold birdhouse on a wooden platform and two double-crook black metal stands that hold four bird feeders.

“My wife always said that if we were going to go to a nursing home, it would have to have a sun room like this so we could sit and watch the birds,” Soyez, 86, said.

Often referred to as the nation’s breadbasket, Kansas once captured the national imagination as the “land of Oz.” Now, due to severe global changes in climate, some of the essential symbols that distinguish it from the rest of the country are being threatened: Wheat and other crops struggle to withstand the rising heat; the Flint Hills, which houses most of the last of the nation’s tallgrass prairie (less than 4% of the original prairie remains), is vulnerable. And, more than 52 species of birds, including the western meadowlark, the state bird, are at risk of losing their range within the state.

As raging wildfires devastate California and rising tides contribute to coastal flooding, Kansas is not typically at the forefront of the national climate change discussion. While 67% of Kansans agree that climate change is happening, only 52% believe it’s mostly caused by human activity, according to a survey by Yale Climate Change Communications. That puts Kansas below the national average on both beliefs, though signs of a shift are emerging.

“I’ve noticed a change,” said Bill Wentz, a professor of aerospace engineering who teaches sustainable energy at Wichita State University. “College students still want to argue about what’s really happening with climate change, but most people acknowledge that it is happening.”

Though not professional birders, the Soyezes tracked changes in the bird population from their yard. In her last years, Virginia was increasingly concerned by the dramatic decline they noticed; some of her favorite birds, like the redheaded woodpecker, didn’t seem to return as often. Other birds, like the white-winged dove, which was once only seen as far north as Texas, began to visit more regularly as the climate warmed.

The redheaded woodpecker is one of 52 species most vulnerable to Kansas’ spring heat waves, which endanger their young and contribute to the loss of their habitat. A recent study by the National Audubon Society also considered how devastation is exacerbated by urbanization and increased wildfires. In Sedgwick County, where Soyez lives, it is one of four birds at high risk because of climate change, and he rarely sees them. It took a long time to understand why.

According to the American Wind Energy Association, 41% of Kansas’ generated electricity in 2019 was from wind, the second highest percentage in the nation, reducing carbon dioxide emissions by an estimated 8.2 million metric tons. Renewable energy investment, according to a spokesperson of Gov. Laura Kelly, is both an economic and environmental imperative. The administration has balanced encouraging Kansas’ wind development while still protecting key ecosystems from being developed despite their wind potential, such as the Flint Hills.

The Kelly administration is working with stakeholders and state agencies on a renewable energy vision for Kansas, the spokesperson said.

Change the community can see

But as rising heat, droughts and increased flooding are noticeably impacting local neighborhoods, advocates are worried that Kansas isn’t doing enough to protect citizens from climate change. Unlike 32 other states, Kansas doesn’t have a climate action plan. Significantly, the state also doesn’t have a planning department, meaning that as new construction projects are being developed there are few considerations of how to reduce and mitigate the future impact of climate change, like reducing greenhouse gas emissions and providing shelter for weather disasters.

“In Kansas, we tend to be pretty hands off and certainly at the state level there’s not really strong laws or guidance,” said Ward Lyles, a licensed urban planner and associate professor of public affairs and administration at the University of Kansas. “And that’s true across the Midwest.”

While there is no one alive today who could remember what pre-industrial Kansas felt like, or saw the tallgrass prairie flourishing, Soyez is part of a generation that witnessed the signs of climate change during their lifetime. A former gas plant worker who has lived in Kansas his entire life, Soyez didn’t know how climate change was affecting his home until recently. Though he didn’t have a term for it, he witnessed its impact over the course of his life, remembering when he used to hunt and drink straight out of local springs. Now, he wouldn’t dare.

“I wouldn’t drink that water any more than a man on the moon,” Soyez said. “I won’t eat the fish I catch around here. I’d eat a fish out of the salt water down there, but the fish that I catch here? No.”

Perhaps most regrettably, he didn’t know how the birds were being affected by climate change until after Virginia’s death, when he read a Wichita Eagle story about Kansas birds: “Birds in Kansas are facing major threats to their survival and without fast action, the state will lose significant numbers and even entire species, researchers say.”

The stark warning still stings. His deep, gravelly voice skips from tale to tale like a stone thrown across a pond, leaving lasting ripples behind as he confronts his grief, and the regret that he couldn’t provide this last answer to his wife.

But hours of video footage, of birds flitting from feeder to feeder and the faint humming sound of a happy Virginia in the background, remind him that through 66 years of marriage their passion never ceased. And he promised to protect it.

Sarah Spicer covers climate change for The Wichita Eagle. This dispatch is part of a series called “On the Ground” with Report for America, an initiative of The GroundTruth Project. Follow her on Twitter: @sarahespicer

A version of this story appeared on USA TODAY on September 17, 2020

*Correction: A previous version of this story stated that Frank Soyez served in World War II and worked in a coal plant.