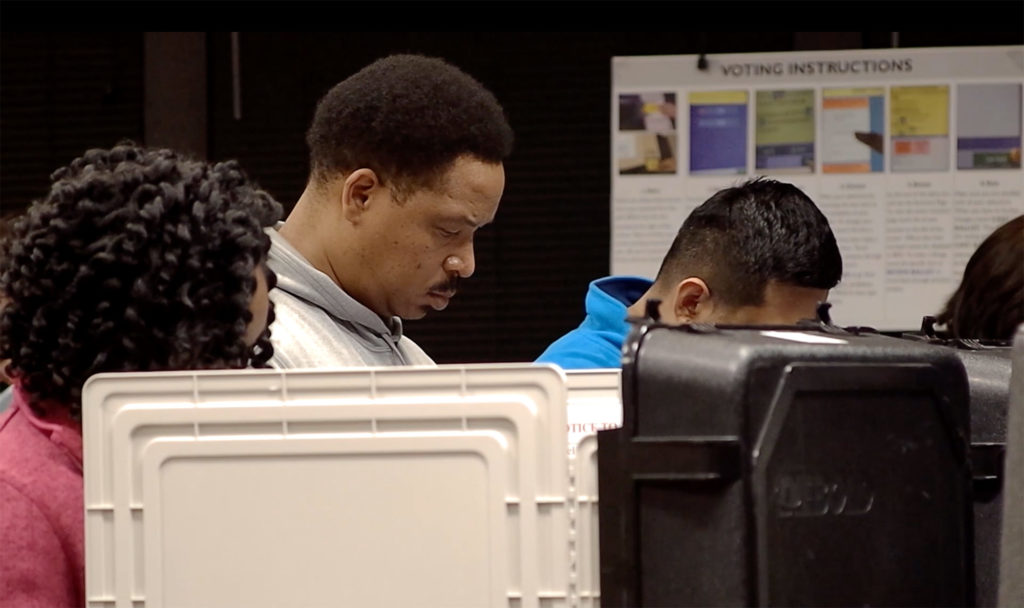 Voters in Georgia faced obstacles to vote on Election Day due to the state's "perfect match" law. (Photo by The GroundTruth Project)

WASHINGTON — The Voting Rights Act, a cornerstone of the civil rights era, passed Congress in 1965 to remove a barrage of restrictions like literacy tests, poll taxes and police intimidation that kept African Americans from actually casting a ballot.

The Act, which placed nine, mostly Southern, states and a multitude of counties and municipalities in the rest of the country under federal control, was partially invalidated by the Supreme Court in 2013.

“Our country has changed,” wrote Chief Justice John G. Roberts Jr. for the majority. “While any racial discrimination in voting is too much, Congress must ensure that the legislation it passes to remedy that problem speaks to current conditions.”

After a midterm election hampered by voter suppression and riddled with voting issues, it is clear that the United States is still struggling to live up to the ideals embedded in Justice Roberts’ words.

Voter roll purges, ID laws and other suppression techniques in Georgia, Florida and North Dakota had a measurable impact on the outcomes by targeting minority groups, and races featuring prominent African Americans in both Georgia and Florida are currently in dispute.

GroundTruthing the midterms – North Dakota from GroundTruth on Vimeo.

Democratic gubernatorial candidate Stacey Abrams won a federal court ruling Monday that will compel Georgia officials to count more than 20,000 provisional ballots as she seeks to force a runoff with opponent Brian Kemp, the Republican Secretary of State who oversaw historic voter purges in a dual role as candidate and overseer of the state elections.

“The best way to win is to overwhelm the system with our democracy,” Abrams said last month. “I don’t question [Kemp’s] heart, I do question the results. We know he has disproportionately purged voters of color, stopped voters of color, arrested voters of color. Regardless of his intent, the result is that racial bias has been injected into our system, and that undermines confidence.”

After winning a majority in the House last week, Democrats pledged that their first bill as majority party will include automatic voter registration and restoration of the Voting Rights Act.

Nancy Pelosi, a contender for speaker of the House, made her position clear this August on the 53rd anniversary of President Lyndon B. Johnson signing the act into law.

“As a core pillar of our democracy, the [Voting Rights Act] has been instrumental in our nation’s fight to overcome generations of oppression, and has set us on a course to fulfill our promise of freedom and equality for all,” she said.

“Yet, today, in the White House, Congress, the Supreme Court and state capitals across the country, the right to vote is under dire threat from the GOP’s mass disenfranchisement agenda, disproportionately impacting communities of color and working families who already face suppression of their voices,” she continued.

The Brennan Center for Justice found that voting purges in states that had been limited by the Act began immediately after the Supreme Court’s 2013 ruling. Researchers estimate that 2 million Americans, who would have remained if not for the Supreme Court’s ruling,were purged.

As election officials in Georgia finish counting votes to determine whether a runoff in the governor’s race will be needed, a recount is underway in Florida to determine the governor and one of the state’s U.S Senate seats.

Florida voters resoundingly passed Amendment 4 on Election Day, giving an up to 1.4 million former felons (25 percent of whom are black) the right to vote in future elections.

Hanging over the recount is the possibility that the participation of those who are newly enfranchised participation might have definitively tipped this election in favor of Andrew Gillum, who would be Florida’s first black governor if victorious.

Gillum joined Stacey Adams in seizing the moment to call for access to the ballot box for all Americans.

“The task at our hand right now is that we show up and we show out in this process and let these folks know that we are not going to be ignored,” Gillum told the congregation of New Mount Olive Baptist Church, a largely African American community, on Sunday.