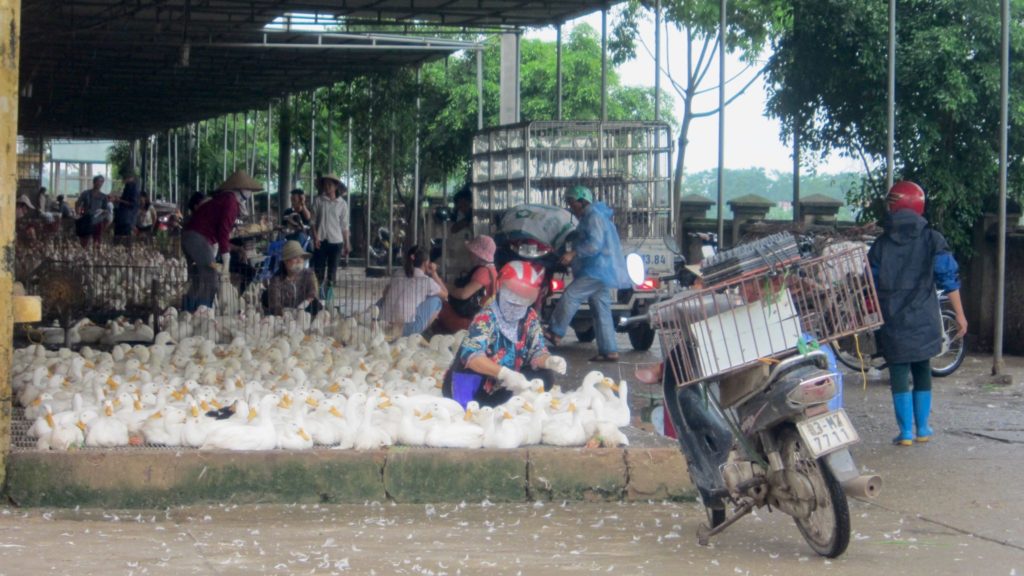 Farmers sell their ducks and chickens at the Ha Vy market outside Hanoi.

It’s the winter of 2003, and Long Thanh Ngo, head of a government biological testing lab in Dong Nai province, watches helplessly as a highly infectious avian influenza virus begins ripping through Vietnam. In a nation heavily dependent on poultry for protein, tens of millions of chickens and ducks are either killed by the disease or culled to prevent it from spreading.

The virus even makes the jump to humans. Ninety-three people in Vietnam who plucked or cleaned infected birds or somehow came in contact with their droppings get sick. Mostly, the illnesses begin as normal flu—fevers, aches, pains. Forty-two people develop severe respiratory symptoms and die. Other Asian countries have cases as well, but Vietnam is the hardest hit.

The infection spreads like wildfire among poultry, effectively halting the large poultry economy in Vietnam. But veterinarian Long can’t do much. Detecting the virus with his rudimentary tools requires injecting biological samples from birds into poultry eggs, where any viruses would multiply, and then testing the contents of the egg. Results take a week. “By the time we knew it was the influenza virus that can infect humans, there were many flocks infected already,” he says. When talking about that time today, Long looks away. “It was very hard.”

The human deaths, the poultry losses, and the effect on poultry trade galvanized all levels of the Vietnamese government, from local to national. In 2004, the government set up a committee of 27 officials from the health, agriculture, and environment ministries to develop policies aimed at early diagnosis and rapid response to an outbreak. As Long puts it, “If we want to protect people, we have to look at and take care of animals and the environment.”

Long is referring to a concept known as “One Health.” It’s a holistic approach to global health that, over the past decade, has become the dominant force in emerging infectious diseases and global health security. After that first big avian flu scare of 2003, Vietnam became an early adaptor of “One Health” and is now a global leader.

Read the rest of this and more articles from The Next Outbreak, at Nova Next.