Food and hospitality in Vietnam, with a side of porcupine 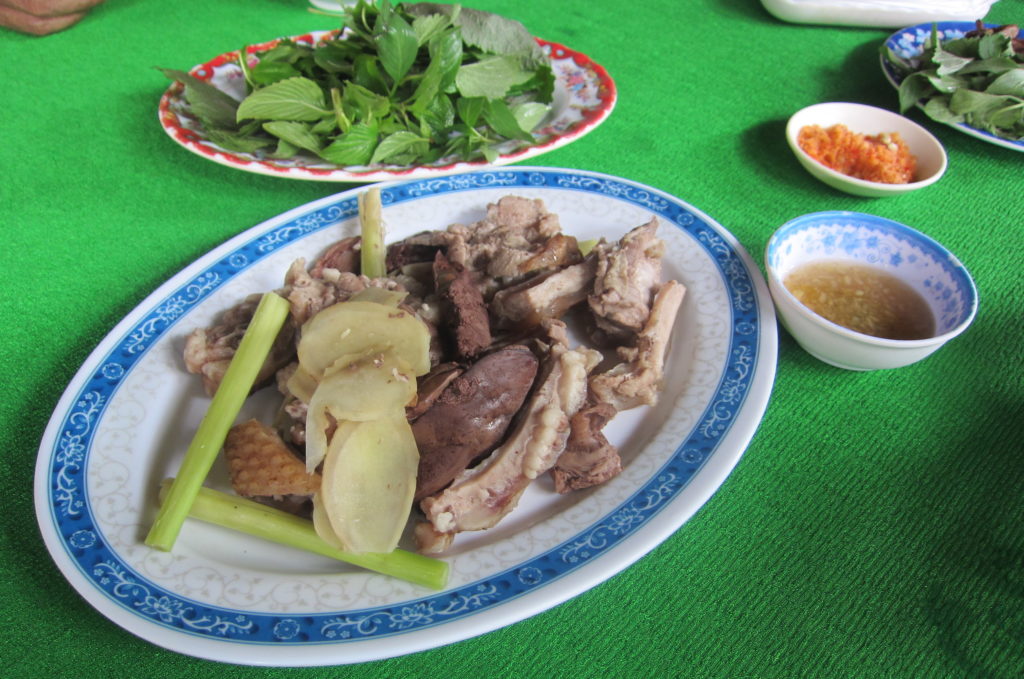 Porcupine is a sought-after delicacy in Vietnam, not readily available in the cities but a treat when you can get it. (Photo by Joanne Silberner/GroundTruth)

In a small no-frills eatery in Hanoi, Vietnam, this week, President Obama made international headlines when he sat down for a $6 meal of bún chả with writer and chef Anthony Bourdain. The traditional dish of grilled pork and noodles is popular in northern Vietnam.

When I travelled to Vietnam last summer to report about “One Health” – an initiative to prevent outbreaks of infectious diseases like avian flu – I figured I’d be fine on food. I’m a big pho fan. The Vietnamese soup and noodles dish is a mainstay in Seattle, where I live. The steamy, savory soup is a cheap eat, and it wards off the Seattle gloom. And I love bánh mì, Vietnamese sandwiches with some combination of vegetables, meats, fish and spicy sauce wrapped in the best bread this side of Vietnam’s former occupier, France.

But porcupine meat? I’d had no experience with that.

The President’s chopstick skills are on point . #buncha #hanoi

I was in Vietnam because the country is a leader in One Health, which is working to figure out how diseases start and how they can be prevented or treated. Vietnam has many programs set up to monitor the health of animals and the environment. I was in a rural village about an hour and a half drive from Ho Chi Minh City to look at a wildlife farm. The farmer purchased young snakes, palm civets (a cat-like animal), bamboo rats – and yes, porcupines – to raise and sell.

Several provincial and federal agencies are concerned that these animals might spread diseases of the forest to humans. Scientists believe palm civets were the source of the SARS epidemic in 2002. Banning the animals wouldn’t work – people would just harvest and eat them on the sly. So instead, the government instituted a program that checks wild animals for infectious organisms, and is teaching farmers and consumers to recognize and bring in diseased animals so they can be studied.

Local officials with the forestry and health departments who were showing off the programs invited me to a lunch at a small restaurant in the village – basically, card tables, chairs and an open kitchen beneath a closely thatched roof. They had been generous with their time. It was hard to say no, until the food arrived at the table.

The very first dish – porcupine. Steam rose from off-white meat on a bed of green cilantro, and there were several sauces to choose from.

Porcupine is a sought-after delicacy in Vietnam, not readily available in the cities but a treat when you can get it.

Years ago I visited Hiroshima to do stories on survivors of the atomic bomb. My travel was financed by a local Japanese newspaper, and towards the end of my visit I was a guest at a banquet honoring the journalists in the program. As one of the guests of honor, I knew I’d be served something special.

Sure enough, when a large baked fish (I’m talking two feet long) was brought to the table, someone carefully removed one of the large eyes and proudly placed it on my plate. I stared at the eye, and the eye, black and shiny, stared back at me. I realized it was pretty close to the same size as my esophagus, meaning I couldn’t swallow it whole or it would lodge there and I’d choke to death, and the obituary writers would have a time of it with the headline.

Luckily, I had had a lot of good Japanese beer by that point and was able to chew the eye (it was extremely chewy) and get it down. It did not taste like chicken. In fact, it didn’t have much taste at all.

Having just visited a wildlife farm and seen the cute porcupines, the porcupine dish at the restaurant was not going to be so easy.

But I didn’t want to insult my hosts, so I put a few pieces on my plate. And truth be told, while it didn’t taste like chicken, it did taste like pork, and it wasn’t so bad. Chewier than pork, and I was a bit put off by a suspicious piece that had little nubbies on it – I suspect this is where the spines were lodged. I got it down fine, and looked forward to the next course, which turned out to be chicken – head and feet included. My hosts offered me the feet – another local delicacy – but this time I said no.

Joanne Silberner reported on One Health from Vietnam for “Next Outbreak,” a multimedia collaboration of The GroundTruth Project and NOVA Next, in association with WGBH Boston.