Vet shortages are the latest wrinkle in the pandemic puppy boom 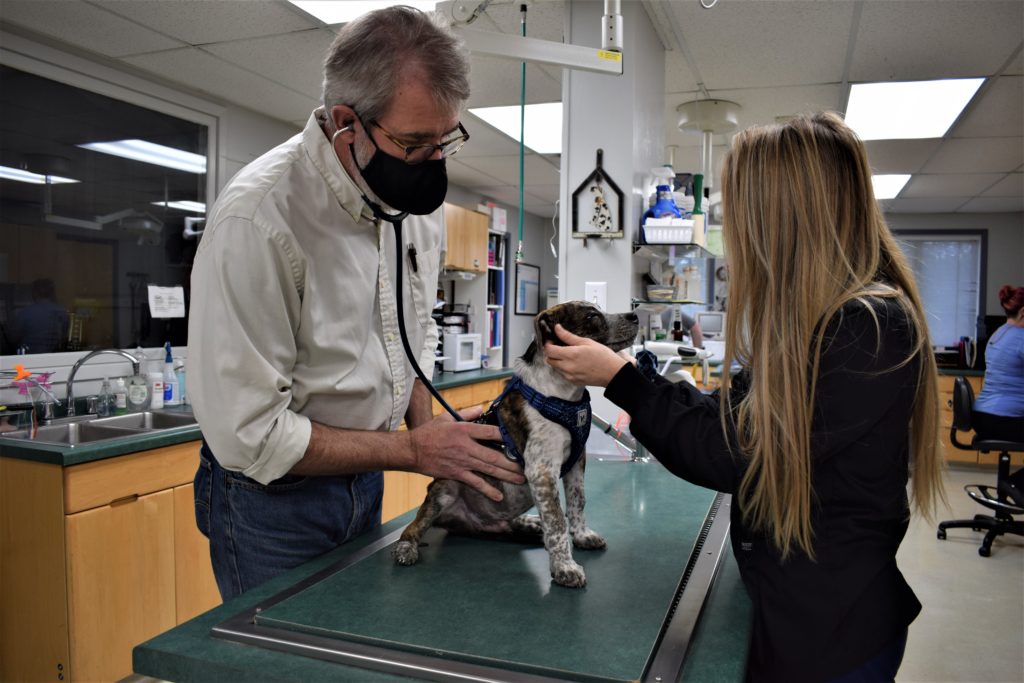 WAUSAU, Wis.—The lobby of Kronenwetter Veterinary Care in Kronenwetter, a Wisconsin village of about 8,000 people, is empty. But don’t be fooled by the echoing hallways: The clinic has never been busier.

Outside, cars packed with pet patients and their owners wait to be called for their appointments. Dr. Chris Bleifuss, head veterinarian, stands next to the open door of an SUV discussing glucose test results after returning Catword, a 15-year-old orange tabby, to his family.

The risk of COVID-19 means services at the clinic are curbside only, with veterinary staff transporting dogs, cats, and on occasion more unusual animals—carpet pythons, bearded dragons, and rabbits to name a few—into the building for treatment, while anxious owners wait in their vehicles.

Bleifuss, who has headed up the practice for 36 years, says he’ll typically see 20 to 25 animals a day, treating injuries and illnesses, counseling pet parents, and sometimes carrying out the sad task of euthanizing patients.

The demand for veterinary services keeps growing, he says, especially since COVID-19 hit, fueling the so-called “pandemic puppy boom.” Yet at the same time, clinics like his across the country are having trouble attracting and keeping staff, and COVID precautions have complicated workflows.

Meanwhile, a national survey by the American Veterinary Association found that a large number of veterinarians are set to retire in the next 15 years, with high-turnover among those in the profession.

The problem is particularly acute in places like Kronenwetter, small communities that often have trouble attracting new graduates from veterinary programs.

For the first time, Bleifuss has had to stop taking new clients. “In all the years that I’ve had this practice, we’ve never ever done that,” he said.

Bleifuss says that prior to the pandemic, he could often get new patients an appointment within 10 days.

Even as the virus surge is cooling in other parts of the country, the combination of relatively low vaccination rates and the rise of the Delta variant, are keeping COVID cases high in Kronenwetter and other small Wisconsin communities. For vets like Bleifuss, that’s creating an ongoing threat to their staff and business.

Kris Hankison, a veterinarian who runs Oakview Veterinary Medical Center in nearby Plover, Wis., a village of about 12,000 people, says he’s already facing the consequences of the Delta variant.

Some staff members caught the virus during the brief period the clinic allowed clients back inside the building over the summer, when COVID numbers were on the wane. Since then, Hankison said the clinic has moved back to curbside service, which can slow down workflow and complicate communication with clients.

“We realized that if we had more cases, we literally may have had to shut down,” Hankison said.

Prior to the pandemic, Hankison said he could see new clients “often within one to two days, but always within a week.” Now the wait times for a first-time patient can be up to two or three weeks.

That’s a cause for stress and frustration for both pet families and his staff, he says.

In an August commentary for the Journal of the American Veterinary Association, the association’s Chief Veterinary Officer Gail Golab and Chief Economist Matthew Salois, said these clinics are part of a larger trend. According to them, among practice owners surveyed, productivity during the pandemic declined by almost 25%.

It’s not just the spike in pandemic pet ownership and COVID precautions that are driving busyness at clinics, says Bleifuss. He has also seen more need for veterinary services from people who are now spending more time at home with their pets and, as a result, are noticing potential health issues that they might have missed before.

The experience of the pandemic, with its stress and isolation, has bonded owners much more closely with their animals, Bleifuss says, and that’s allowed them to notice things like limps, lethargy, and trouble eating more quickly than in the past.

Amid that rising demand, staffing shortages show no signs of abating. Hankison said he has been searching for an additional vet at his clinic for about eight months. Meanwhile, Bleifuss has been on the hunt for 18 months. So far, he hasn’t received a single application.

“That’s extreme,” he said. “In the past, whenever I’ve had a position open, I’ve never had a problem filling it.”

According to Darlene Konkel, Wisconsin’s state veterinarian, Hankison and Bleifuss aren’t the only ones struggling to hire. She monitors where there are critical shortages of veterinarians and says they’re the worst in rural and small communities in the north central, northwestern, and northeastern parts of the state.

She thinks that for many young graduates in particular, there is a desire to stay in metropolitan areas or the college towns where they went to school. New vets may even not know about or consider practicing in smaller communities, she adds.

Konkel says there are efforts being made to provide incentives for new graduates to move to areas experiencing shortages. One USDA program provides up to $25,000 a year of student loan repayment for veterinarians who commit to working in a shortage area for at least three years.

But the issue is exacerbated by the stressful nature of the job, says Bleifuss, which leads to burnout and often causes veterinarians to leave the profession.

“You feel this great demand upon who you are as a person, and you have a great sense of obligation to have all the answers and to answer all the phone calls and see all the pets in a day,” he said. “Many people are just working tremendous hours.“

Golab and Salois also point to high staff turnover in the field as a consequence of burnout.

“The average turnover for veterinarians is twice as high as it is for physicians in medical practice. And veterinary technicians have one of the highest turnovers of all health care positions compared,” they wrote in the commentary piece.

Burnout among veterinary staff can also have tragic consequences.

To attract new talent, Bleifuss says he’s trying to provide good benefits, educational opportunities, competitive wages, and an environment that allows for work-life balance. He says he’s also doing his best to watch out for staff members who may be suffering from burnout and encouraging them to rest and take time off when necessary.

Ultimately, Bleifuss says his priority remains protecting his staff: “We still are trying to be as cautious as we can and preach to our staff: this thing is not over.”