Where are the US and Russia finding common ground? Low Earth Orbit 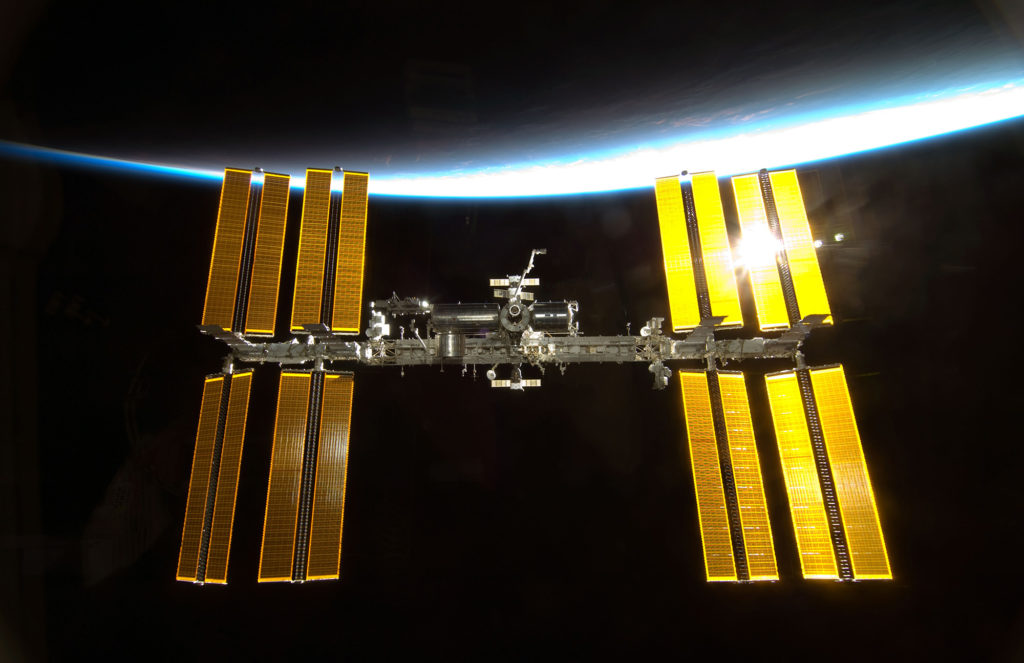 The International Space Station, photographed by the NASA shuttle Endeavor. Even as geopolitical situations get dicey on Earth, astronauts from different countries, even those in disagreement, still work together in space. (NASA)

MOSCOW — “From out there on the moon, international politics look so petty,” said American astronaut Edgar Mitchell. “You want to grab a politician by the scruff of the neck and drag him a quarter of a million miles out and say, ‘Look at that, you son of a bitch.’”

A similar attitude seems to motivate the people behind the International Space Station. Americans and Russians working on the Station tend to turn a blind eye to terrestrial snafus that divide their respective countries.

“The ISS definitely isn’t apolitical,” said NASA spokesman Rob Noviar in Moscow as he prepared for the latest launch in Kazakhstan. “But it’s doing a better job than the UN. Think of the million lines of code, the incredible logistics,” he continued proudly. “It’s difficult, but you have to work together.”

The space station has a long history of international cooperation since the project’s launch in 1998. The first segment of the space station Zarya (or “Dawn”) was constructed in Russia with a contract by Boeing, and since then, the precedent set in the 1990s has continued with good faith into the 21st century with little interruption.

“We on the International Space Station are a model for the rest of the world to follow,” said NASA Administrator Charles Bolden last November in a NASA TV interview.

With cooperation from American, Russian, Canadian, European, and Japanese space agencies, the goals of the ISS are broad, but most research looks at the limits of human space travel: researching muscle breakdown in low gravity, developing space-appropriate technology and the like. Focusing more on the progress of human civilization, these scientists are rarely distracted by day-to-day political rat races.

Coincidentally on July 28, the same day that Russia seized American properties and demanded the U.S. Embassy to cut its staff, three astronauts—one American, one Russian, and one Italian—launched from Kazakhstan to join the International Space Station. The ISS is business as usual.

That does not mean that NASA and the Russian space agency, RFSA, have been able to avoid all political quarrels, especially with Russia’s geopolitical interests. In 2014, in response to the Russian annexation of Crimea, NASA dropped all non-ISS projects with Russia.

“After analysing the sanctions against our space industry I suggest the U.S. delivers its astronauts to the ISS with a trampoline,” tweeted Russian Deputy Prime Minister Dmitry Rogozin in response. With the space shuttle program ending in 2011, the Russian Soyuz is now the only way for U.S. astronauts to reach the ISS, a fact that Russia is quick to remind the U.S.

Russia seemingly tried to force NASA’s hand that same year by announcing that they were working with the U.S. to build another space station; NASA walked back the statement, leaving both agencies in an uncomfortable position.

The latest wave of sanctions again led Rogozin on July 29 to question how long Russia will continue to cooperate with NASA.

Both countries continue to beat their chests, but overall, no politician has taken the step from rhetoric to policy—probably because when it comes to the ISS, the U.S. and Russian Space programs depend on one another.  At home, each agency is not met with as much support as they might like.

Space exploration means a great deal to Russians, considerably more than it means to Americans. The excitement of the space race may have dulled in American culture, but especially because of the USSR’s scrappy origins, a lot of Russians continue to find pride in their multiple space race victories.

“We have many problems in Russia, but even with so much difficulty, we can still say we did space first,” said Russian journalist Yuri Karash in a 2006 interview with author Greg Klerkx. “For Russian pride, space means goddamn everything.”

Recently, however, the Russian space program has not been as successful. Although it may imbue historic patriotism, Russians are starting to wonder if the money going into the agency could be better served elsewhere. One 2016 report from WIRED tied dramatic cuts in funding, systemic corruption, and risky experimentation to multiple rocket failures.

“Russia made a huge jump in the USSR; we all are very proud of it,” said Evgeny Tsukanov, 21, a student and Moscow resident, “but it’s better to solve all the problems in the country, and then think about space afterward.”

Incapable of funding any large projects on their own, Russia will not jeopardize their role in ISS.

NASA has faced similar funding questions. Recently, Trump’s new “America First” budget calls for cuts across NASA, including the ISS. Granted, NASA has an impressive amount of popularity amongst Americans; but its climate research has made them a few enemies, helping motivate Congress to slash their budget.

More than one hundred billion dollars have been invested in the International Space Station, and no one wants to risk their role in its groundbreaking research. With tightening budgets, working together is not only the best way forward, but it’s likely the only way forward.