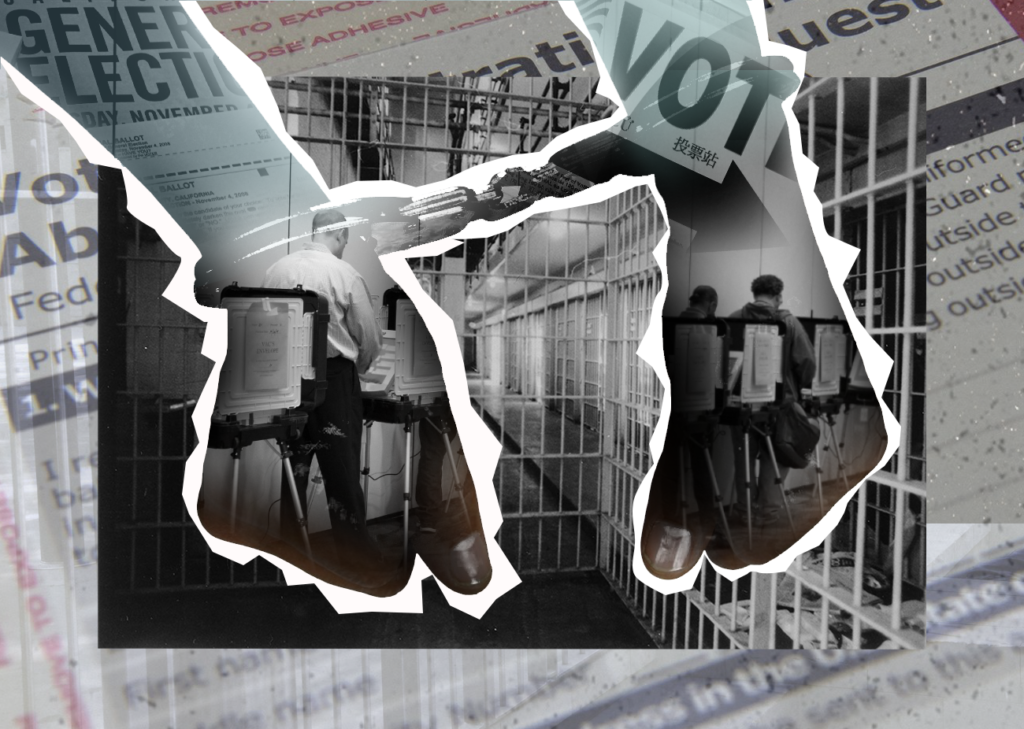 HARTFORD, CONN. — James Jeter’s jacket on Election Day 2019 made it hard for anyone in downtown Hartford to ignore him. Highlighter yellow, its reflective silver strips wrapped over his shoulders and across his torso. In the space between his broad shoulders is the name of the organization Jeter co-directs: “Unlock the Vote.”

“It disarms, rather than causes one to get up in arms,” said Jeter, describing his fluorescent garb. He wears it to promote the work of Unlock the Vote, which seeks to end barriers to the ballot for those on parole, approximately 3,500 citizens in the state of Connecticut, and disproportionately people of color. It’s what he was wearing outside City Hall the night a man told Jeter he wanted to register to vote. But there was a catch.

“Tonight is my last night on parole,” he told Jeter. He would not be able to cast a ballot.

“We want you to understand what we’re doing,” Jeter told him. “We’re doing this so this can’t happen, so that way it’s never an issue for you, for any of us, to have to worry about parole anymore.”

Jeter used “us” because he knows what it’s like to be locked up and out of the voting process. For 19 years and four months, Jeter served time in prison for killing a 19-year old when he, too, was a teenager. He’s been free for three years and spends a lot of his time at the Capitol in Hartford, trying to make the state more equitable for the formerly incarcerated who have served their time.

“I came to social justice just by growing up black in America,” Jeter said. “I never lived a day where I haven’t felt the imbalances in power and privilege in employment and opportunity.”

Nationwide, 31 states prohibit residents from voting because of a criminal record. Among them, Connecticut has the most stringent criminal disenfranchisement laws in the Northeast and it is the only state in the region that still prohibits those on parole from casting a ballot. Maine and Vermont, by contrast, are the only two states in the country that have never disenfranchised residents because of their criminal histories; even the incarcerated can vote from behind bars.

Despite making up about a third of Connecticut’s population, people of color comprise 72 percent of its incarcerated population, or 7,499 people of 10,445 total as of June 1. By contrast, white people make up 66% of the state’s population but only about a quarter of those behind bars, which follows a broader national trend of disproportionate numbers of minorities in the justice system.

People on probation can cast a ballot in Connecticut, but those on parole cannot, disenfranchising about 3,500 people, as of May 1. And though anyone serving a felony sentence in the state is not eligible to vote—something Jeter is working to reform—roughly one-in-four people behind bars are eligible to cast a ballot come Election Day. These members of the state’s incarcerated population have not been convicted of a crime but are locked up pre-trial, or for a misdemeanor. But a slew of logistical hurdles, such as restrictive internet access that limits voter registration, requirements to request absentee ballot applications by letter and tight turnaround for mailing ballots in, often discourages them from participating. And political apathy, Jeter says, is cyclical.

“The majority of people in prison are pretty politically engaged,” Jeter said. “It’s just that they don’t believe in the system. They’ve never seen a working example of how it’s benefitted their community.”

Jeter’s own political awakening started long before his incarceration, but his interest only burgeoned from behind bars as he spent time with older men serving long sentences for crimes they were convicted of when they were young. These men understood the way family trauma echoes across generations, and what it’s like to be poor and hungry. They talked about philosophy—Kant and Nietzsche—or discussed the works of Toni Morrison and James Baldwin. Despite their individual struggles, the elder inmates asked themselves how to help others, and how they would enact change, if they could.

“It becomes a cycle,” he said, reflecting on low income black and Latino neighborhoods across the state. “So, communities don’t grow. They don’t change.”

Jeter likens under-resourced black and Hispanic communities that are shut out of, or uninterested in, the political process to “civic graveyards.” Voting and civic engagement, he said, is a learned practice. If a parent comes home from prison and doesn’t cast a ballot in the next election, then their children aren’t likely to, either.

Unlock the Vote works to restore voting power to black and Latino men and women who are overwhelmingly impacted by Connecticut’s disenfranchisement laws. Jeter leads the work of engaging communities in under-resourced and heavily policed cities like Hartford, Waterbury and Bridgeport because he understands them and the political alienation that stems from their disenfranchisement. As a native of New Haven, a grievously stratified Connecticut city home to both Yale University and a 25% poverty rate, Jeter knows firsthand why many people feel the system will never work for them.

“Our approach hasn’t been, ‘This is why you should be engaged.’ It’s been, ‘I get why you’re not engaged,’” said Jeter, who has served as the organization’s co-director since the end of 2018. “We changed the approach to try and pique interest. Because we know we’re up against people saying, ‘Yo, this is life, and that’s that.’”

Expanding access to the ballot box is key to a robust democracy, Jeter said, because it will make local government more representative and aware of the needs of its most marginalized communities, which chronically struggle with under-resourced schools, low-paying and insecure jobs and rising housing costs. State legislatures and city councils work best when they reflect those who they serve, he added, because they mobilize voters who see their interests represented by their political leaders.

Though he won’t be able to cast a ballot for another 12 years, when he is off parole, Jeter knows the ballot box is more than a place for ideas.

“The civic body isn’t whole if anyone is locked out of it. It has detached body parts,” Jeter said. “And that hurts both ways. It hurts being detached, and the system is ultimately hurt by having people detached from it.”

As he currently works toward his bachelor’s degree in literature at Trinity College, Jeter continues to wrestle with the violence of his youth.

“I move constantly with him in my thoughts,” he said of the young man he killed. “At the root of healing is my ability to be active and helping. What can I do to help?”

Kelan Lyons is a Report for America corps member, covering criminal justice for the Connecticut Mirror. This dispatch is part of a series called “On the Ground,” supported by The GroundTruth Project. Follow him on Twitter: @Kelan_Lyons.