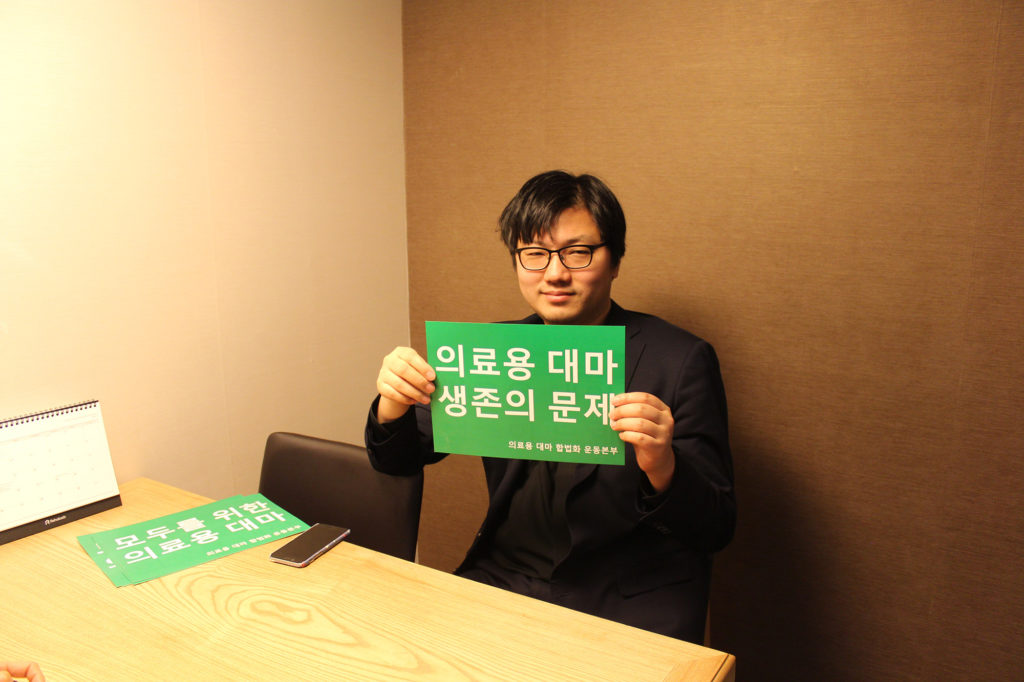 Rev. Sungsuk Kang is a third-generation Methodist pastor and an advocate for legalizing medical marijuana. His sign reads, "Marijuana is a matter of life and death." (Tom Carroll/GroundTruth)

SEOUL — Seated on a large colorful play mat, a doctor coos at her son; they are both bathed in the sunlight that streams into their high-rise apartment. She waves a red, rubber toy with brush-like tendrils in front of her son’s eyes. He seems agitated, yelling in quick bursts.

The doctor, who asked for anonymity due to a prior marijuana-related offense, had recently discovered how well cannabidiol or CBD supplements helped her ailing 5-year-old son. CBD is a derivative of marijuana with nearly no psychoactive chemicals (what gives users a typical “high” sensation).

She says that her infant son started missing developmental marks such as making eye contact; he also seemed disengaged with his surroundings. By 19 months, he was having seizures. After a brain scan, he was diagnosed with Lennox-Gastant syndrome, a nearly-incurable type of epilepsy with multiple types of seizures. She tried multiple legal medications and diets but found the treatments weren’t effective. At two, her son had a brain operation. It helped at first but then the seizures returned.

She discovered CBD oil on the internet. She dug into medical journals and studied case reports, her research revealing that CBD can help control seizures.

“I thought, it’s worth a try. So I bought it from a U.S.-based website and gave it to my boy. It was very effective. It decreased his seizures, and his cognitive functions started to develop a little faster than they had been,” she says.

After a month of CBD treatment, she took her son in for a brain scan. It showed improvement; the pediatrician recommended daily treatment.

Buoyed by the good news, she ordered a second supply and waited. After the supposed-delivery date passed, she called Customs to figure out what happened.

“A few days later I got a call from the prosecutor’s office saying that I needed to come and see him regarding my CBD shipment,” she says.

Up until that time, she was sure that CBD wasn’t illegal— to her, it seemed more like a vitamin than a narcotic. She showed the prosecutor multiple medical studies toting the medical qualities of CBD but to no avail.

The prosecutor dropped charges but told her that if she were caught again she would go to jail and lose her medical license.

“[CBD] was our last hope, because we had tried everything to beat this disease, and he was getting better and we were increasing the dosage.”

She knows that people’s opinions can be hard to change. “People have to know that CDB is not narcotic, or bad, or habit-forming. It’s obvious that CBD is not that kind of drug. But it’s illegal here, and we have to let people know and teach them, but it’s a lot of work,” she says.

The doctor is one of small group advocating for legalizing medical marijuana, and she has found an unlikely ally in a man of God.

An unlikely advocate for medical marijuana

Rev. Sungsuk Kang, a third-generation Methodist pastor, sips his coffee and checks email at his desk. He sits in a tiny, frosted glass-walled office, where he runs the Organization to Legalize Medical Cannabis in Korea, an advocacy group he started back in June. He is its only employee.

The doctor whose son suffers from seizures reached out to Kang soon after reading about his efforts in a magazine.

Kang mentions he suffered a serious back injury last year that resulted in a hospital stay and treatment of traditional narcotic pain-killers. After recovering, he felt there had to be an alternative — he found discussions of the benefits of medical marijuana. (After being asked multiple times, he is clear that he did not use medical marijuana while recovering from his injury.)

He knows that Koreans’ negative perceptions of marijuana make his job harder.

Since the passage of the Cannabis Control Act in 1976, South Korean law has treated marijuana the same way it does cocaine or heroin, as a harmful drug with no medical value. A newspaper article in June 2017 demonstrates Koreans’ attitudes towards a substance that is being decriminalized in several other countries. The piece in the Korea Herald recounted the story of Son Ga-in, a major K-pop singer, who created controversy by saying her friend suggested she try marijuana. The fact that this is news shows the common stance against marijuana in South Korea.

If the general public sees marijuana as immoral, is a Methodist minister one of the few people South Koreans will listen to when he says the substance isn’t bad?

“I’m well aware that Korean society has low awareness around marijuana and the general sentiment is so against it,” Kang says through a translator.

He pulls up an official statement from the Methodist Church on his smartphone that states that the Church believes that “seriously ill people should not be subject to criminal sanctions for using marijuana if the patient’s physician has told the patient that such use is likely to be beneficial.” He feels emboldened, knowing that his advocacy work is supported by the Methodist Church. He says his family supports him, too.

The Methodist Church is not alone—other Protestant churches support legalizing medical marijuana including the United Church of Christ and the American Baptist Church according to the Marijuana Policy Project, a U.S.-based advocacy group.

At a small Mennonite reading group Kang attends on Sunday evenings, people shift uncomfortably when asked if the support Kang’s mission. One man concedes that he supports medical marijuana but he’s wary to blur legal lines. “I’m just afraid someone will use it for fun,” he says.

Kang views marijuana as medicine. “Medication is not subject to the debate between moral and immoral. It’s not subject to be judged by the Bible. It’s like aspirin, you can not debate whether it is moral or not,” says Kang.

In the short time that Kang has pushed to remove the stigma of medical marijuana, he has attracted like-minded people.

Fighting alongside him is Park Jin-sil, a lawyer who advises his advocacy group. She has been working on drug-related issues for 15 years. She too believes that medical marijuana should be decriminalized. She goes a step further, saying “recreational marijuana should be legalized, too, but this is far too radical of an idea for South Korea at this moment.”

She points back to the U.S. occupation of South Korea immediately following the Korean War as the turning point against marijuana.

“It’s America’s influence that made us turn away from marijuana,” she says through a translator. But now that more states in the U.S. are decriminalizing medical marijuana—she thinks that attitudes will change in South Korea, resulting in decriminalization in South Korea in the near future.

There has been some movement in Korea’s National Assembly. Rep. Shin Chang-hyun, a member of the ruling Democratic party, introduced a bill in February that aimed to legalize some forms of medical marijuana. His proposal has been stuck in committee since, but Kang has learned that key lawmakers in the Legislative Welfare committee have signaled that they will review the bill by the end of April.

Back at his office, Kang is undeterred. He is no longer leading a church, choosing to make his marijuana advocacy work his full-time job. When asked if he’s afraid that his lobbying efforts may make it harder for him to find a church to lead in the future, he answers simply, “People accept this as a medical mission.”