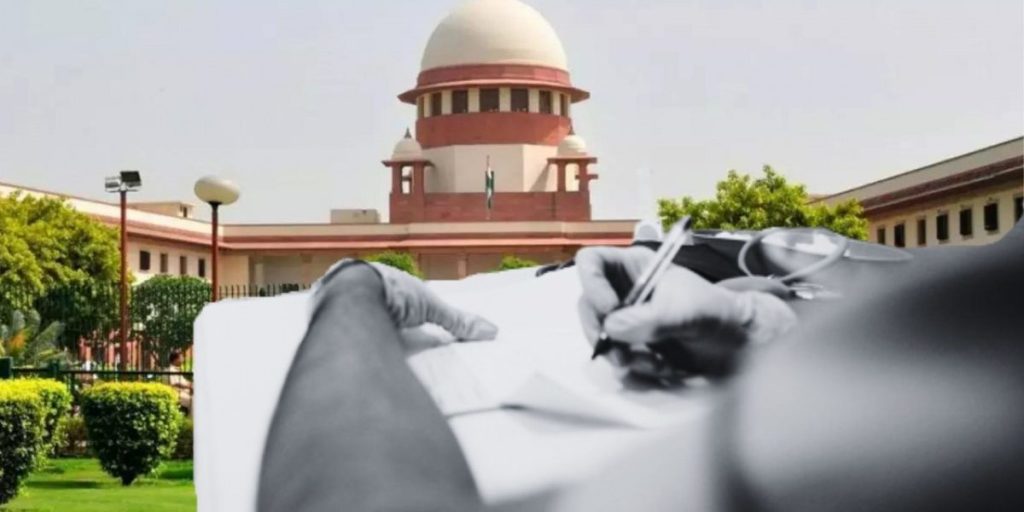 A doctor writes a prescription. In the background is the Supreme Court. (Photos by: Creative Commons and PTI)

New Delhi: The Union government has made it clear in the Supreme Court that it thinks that the current voluntary code in place to prevent bribing of doctors by pharmaceutical companies is ‘adequate’, The Wire has learnt.

It has told the court that it was not in favour of making –  ‘in haste’ – a law to this effect that will change the status of the code from voluntary to mandatory.

A Supreme Court hearing in August in an ongoing case where the petitioner demanded a legal instrument in this connection has brought the alleged physician-pharma nexus under fresh spotlight. Apex court judge Justice D.Y. Chandrachud had described the issue as ‘serious’. Justice Chandrachud had also remarked that it was ‘music to his ears’ when he got to know that the manufacturer making an antipyretic drug ‘Dolo’ had allegedly spent exorbitant amounts of money on marketing.

At the heart of the issue is a code – Uniform Code of Pharmaceutical Marketing Practices (UCPMP) – which prohibits pharmaceutical companies from giving ‘freebies’ to doctors.

It was put in place on January 1, 2015, and does not have legal backing. The code was initially brought for a period of six months only so that it could be reviewed afterwards. However, the code got an extension later and it will remain in force as it is till another such instrument comes.

“It is humbly submitted that the writ petition gives an incorrect impression that the extant legal regime is insufficient and inadequate to protect the citizens from unethical marketing practices by the pharmaceutical companies in their dealings with healthcare professionals,” the government has said in reply in the Supreme Court.

The government also said UCPMP is working ‘adequately, as per the provisions of the Code’.

By telling the court that the UCPMP is working just fine, the government has, in fact, gone back on its own position from 2017 – one which it had maintained for three years. There are many instances which attest to this.

The annual report of the department of pharmaceuticals (DoP) which was published 2018, said:

“The implementation of the UCPMP has been reviewed in consultation of all the stakeholders including NGOs/Civil Societies and it was felt that in order to implement it more effectively, it would be desirable to make it mandatory.”

The DoP functions under the union ministry of chemicals and fertilisers.

This was not the first time that the DoP had felt the need for a mandatory code. It had floated a proposal back in 2017 to have some sort of legal instrument in place instead of a voluntary code. The DoP presented to the Union law ministry a draft ‘Essential Commodities (Control of Unethical Practices in Marketing of Drugs) Order, 2017’.  The idea was to make it a part of the Essential Commodities Act.

However, that proposal of DoP could not make a cut with the law ministry which believed that the scope of the Essential Commodities Act was only to regulate the production, supply and distribution of essential commodities and not necessarily control the marketing aspect. But the DoP thought that taking recourse to the Essential Commodities Act was the best way and, therefore, it sent a couple of reminders to the law ministry, too, to expedite its proposal.

“The Department has been sent a proposal to Department of Legal Affairs for vetting the draft Drugs (Control Marketing) order-2017 under Section 3 of the Essential Commodities Act 1955 vide its file of even number dated 28/06/2017,” a letter written by an official of the DoP on December 26, 2017, said. “May I request you to look into the matter and to expedite the same,” it added.

The DoP was consistent with its stance. In fact, replying to a Right to Information (RTI) application filed by one Kameswar Rao, a Visakhapatnam resident, the DoP said on December 26, 2017, “…after reviewing the implementation of the Uniform Code for Pharmaceutical Marketing Practices (UCPMP) which is at present voluntary is being examined in consultation with Ministry of Law to make it statutory (sic).”

Replying to a question in the parliament on May 10, 2016, the then Union minister for chemicals and fertilisers, Ananth Kumar, had also said, “The voluntary code was not working as expected.”

So for three years – 2016, 2017 and 2018 – the government maintained that the UCPMP was not working well. However, in 2019, it makes a 180° turn with Minister of State (MoS) for health and family welfare saying in parliament in reply to a question of Rajya Sabha MP K.C. Ramamurthy that all was well with the code. A year later,  the government repeated the same thing in 2020 in the parliament, and said the code would not be made mandatory.

What led to the change in the stance of the government is not clear.

The government’s reply to the Supreme Court noted that lawmaking takes time.

“It is pertinent to note that making the code statutory is a policy decision and a legislative act which necessitates extensive consultation between different ministries and government departments and requires an overall consensus,” the government said.

“Thus, it is a time-consuming process which cannot be completed in haste,” it added. However, the consultation process between the DoP and the law ministry started in 2017 – five years ago. In addition, whether at all the government intends to make a law remains unclear because in parliament in 2020, it made itself clear that there was no plan to do so.

However, almost a month after the current Supreme Court case made headlines, the government constituted a new committee. It stated in the court that a ‘high-level’ committee under the chairmanship of V.K. Paul, member (health), NITI Aayog, would go into the issue ‘holistically’ and submit its report within 90 days. The committee was formed on September 12, 2022.

That the UCPMP is toothless is something that can also be gauged from the replies of the government in parliament, even after it changed its stance to not framing a law.

“The Uniform Code for Pharmaceutical Marketing Practices (UCPMP) is voluntary in nature and under UCPMP, there is no provision for Department of Pharmaceuticals to directly deal with complaints received regarding unethical Practices,” chemicals and fertilisers minister D.V. Sadananda Gowda said in Rajya Sabha on September 18, 2020.

However, almost a month after the current Supreme Court case made headlines, the government constituted a new committee. It stated in the court that a ‘high-level’ committee under the chairmanship of V.K. Paul, member (health), NITI Aayog, would go into the issue ‘holistically’ and submit its report within 90 days. The committee was formed on September 12, 2022.

That the UCPMP is toothless is something that can also be gauged from the replies of the government in parliament, even after it changed its stance to not framing a law.

“The Uniform Code for Pharmaceutical Marketing Practices (UCPMP) is voluntary in nature and under UCPMP, there is no provision for Department of Pharmaceuticals to directly deal with complaints received regarding unethical Practices,” chemicals and fertilisers minister D.V. Sadananda Gowda said in Rajya Sabha on September 18, 2020.

But what can it do as per the current form of UCPMP? Nothing. Except for asking associations of pharmaceutical companies – of which the erring companies are themselves members of – to take actions against them.

And what can these associations do at most? Suspend them from membership of the association and publish in the media the reprimand they gave. The latter is practically unheard of.

But what about doctors who accept freebies? As per Indian Medical Council (Professional Conduct, Etiquette and Ethics) Regulations, a registered medical practitioner is not allowed to receive gifts, travel facilities, hospitality and cash or monetary grants. The regulations came into being in 2002. If a doctor is found guilty, his or her licence can also be suspended. This is the provision that the government claimed was good enough. But has that also happened?

Amitava Guha, one of the three petitioners of the current Supreme Court case, sent the DoP copies of airline tickets that a pharma firm had allegedly booked for nine doctors for round trips from Kolkata to Srinagar. He also gave copies of hotel bills and schedules of those doctors for days which were not remotely related to any medical conference. On other occasions he has shared copies of tickets of doctors for Vancouver and cash payments for trips to Australia – all allegedly paid for by pharmaceutical companies.

This unholy alliance between doctors and pharmaceutical companies has come to fore through Comptroller and Auditor General (CAG) reports also. One such report presented in 2015 said, “We noticed in 36 cases involving tax effect of Rs. 55.10 crores in seven States (namely, Andhra Pradesh, Gujrat, Karnataka, Maharashtra, New Delhi, Tamil Nadu and Uttaranchal) where the expenditure towards gifts/freebies to medical professionals were allowed despite being prohibited by law/not related to business.”

While the petitioners of the case will file a response to the government’s reply before next hearing this month, the latter has already told the apex court that any direction to it of making a law would be tantamount to judiciary overstepping its mandate vis-a-vis the executive’s domain. Whether the court would be able to wriggle out of this and show a way forward to curb a deep menace remains to be seen.