ON THE GROUND IN MODESTO, CA

Beneath the Bridge: Children in California endure daily hardship and homelessness 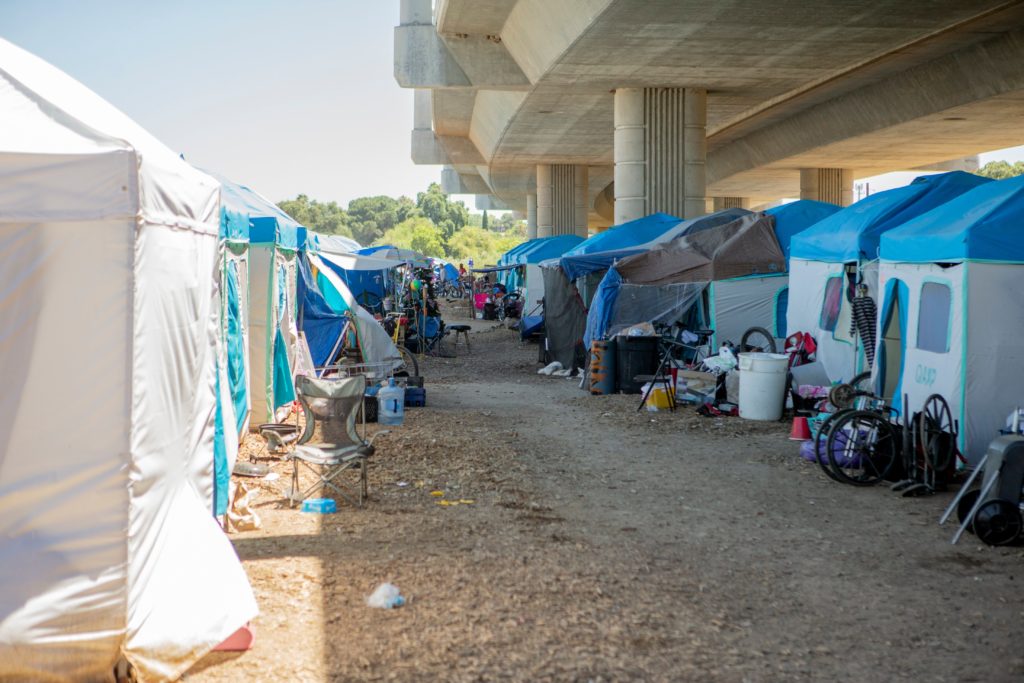 MODESTO, Calif. – After a dip in the Tuolumne River, a 10-year-old girl who didn’t know how to swim but had no fear of the river chatted with her “street sister” in their invented language, crafted so they had something private in their otherwise exposed lives.

The July sun sizzled as the tent city approached 100 degrees, and with no breeze or electricity, a swim in the Tuolumne was the only relief. The two girls, who quickly reverted to English when they wanted to discuss rap songs, school or surviving on the streets, were drenched from head to toe as they headed barefoot under the 9th Street Bridge.

They live here, at the Modesto Outdoor Emergency Shelter, an encampment for homeless people situated under the bridge. Despite being the youngest, the 10-year-old girl with magenta-streaked hair, sun-bronzed skin and a feisty attitude was the outspoken boss of her patchwork “street” family of eight kids, ages 10 to 14, who each live with their own parents at MOES. She asked to be identified only by her initials, M.N.

Like many cities across the nation, especially in California, Modesto is struggling with how to help its residents who can’t afford housing. MOES provides a temporary place, safer than living on the streets, while offering assistance in finding more permanent housing. The MOES site was a joint effort made possible with funding from the city of Modesto and Stanislaus County, and operated by non-profit organizations co-located on the complex.

M.N. was born at a local mission and had never lived in a house of her own. She said kids were embarrassed to live at MOES because people looked down on them.

The kids teased each other about their vulnerabilities, but fiercely protected one another too.

“That’s Juan, Miguel and Jesus,” joked 12-year-old Javi, introducing his friends by the generic names he thought outsiders referred to them by.

Javi taunted the oldest of the group, a visibly shy, anxious 14-year-old, about pulling out his eyebrows, but simultaneously played his friend’s favorite song on an iPhone to help calm him down.

Children are homeless because of the circumstances of the adults responsible for them, who in turn are often homeless as a result of their own childhoods. Researchers have shown that many homeless individuals have survived harrowing psychological trauma, including physical or sexual abuse, alcoholic parents or domestic violence, to name only a few. Most, however, struggle against unyielding poverty.

They can’t afford to keep a roof over their families, for rising housing costs, health problems or difficulty finding employment that pays a living wage. The average monthly rent in Modesto rose from $780 in 2012 to $1265 in 2019, far outpacing salaries. Some homeless people struggle with mental illness or substance abuse, often an unhealthy attempt to self-medicate.

Everyone has a story, and their children have been woven into the plot. Last year, children accounted for 250 of the nearly 2,000 homeless people in Stanislaus County, in California’s agriculturally bountiful Central Valley. Nearly 25% of this county’s children live in poverty, and one in five kids go to bed hungry.

In 1938, John Steinbeck wrote “Starvation under the Orange Trees,” a nonfiction article about the plight of migrant workers here, most of whom were fleeing the Dust Bowl in pursuit of the promise of a golden California life. More than 80 years later, broken promises and hardship along the Tuolumne River remain unforgiving.

Across California in the 2016-17 school year, nearly one-quarter million students in K-12 were considered homeless, living in insufficient domiciles such as motels, cars, emergency shelters and couch-surfing in the homes of friends or family.

Nationwide, families with children are the fastest growing segment of Americans without shelter, making up more than one-third of the homeless population. Every year, more than 2.5 million youth don’t have a place to live or the chance to attend school regularly.

Homelessness, especially chronic homelessness, as in M.N.’s case, can be a severe detriment to a child’s education. The kids don’t have school clothes or supplies like their peers, nor do they have regular access to running water or electricity, so they may arrive at school unkempt and unprepared for class, making them easy prey for bullying.

They miss more school days, more frequently change schools and have higher rates of developmental delays than their peers. They are less likely to graduate from high school or attain a GED diploma by the age of 18, increasing their risk of remaining impoverished and continuing the cycle of poverty.

At the end of July, the MOES kids were thrown a lifeline. A grant from Community Housing and Shelter Services, a local Housing and Urban Development-certified counseling agency, funded motel rooms for families with children.

This allowed the kids to start the new school year with electricity, water and secure housing. It also gave the parents an opportunity to look for stable housing, without the daily worries of finding safety. And in December 2019, MOES closed, as permanent structures with adequate beds became available for anyone who wanted one.

Still, the tent city was emblematic of Modesto: the community rallies to solve its problems, especially for their most vulnerable neighbors.

ChrisAnna Mink covers health for the Modesto Bee. This dispatch is part of a series called “On the Ground” with Report for America, an initiative of The GroundTruth Project. Follow her on Twitter: @CMMink.