The uncertain future of US-Cuba relations 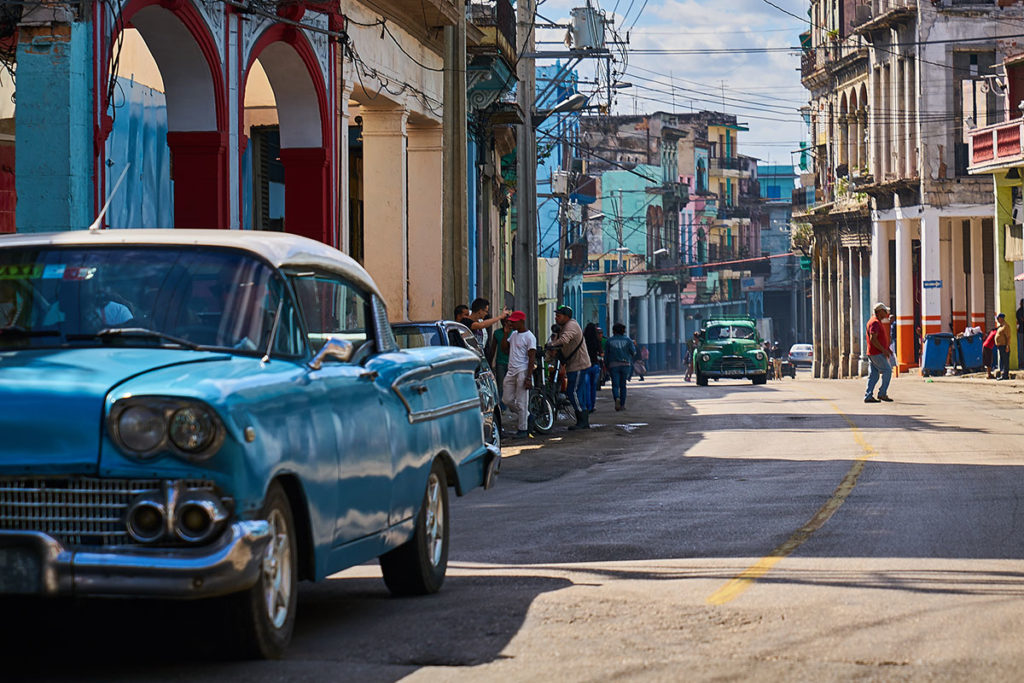 People walk along a streets in Havana, Cuba. Diplomatic relations between Cuba and the United States were re-established during Barack Obama's presidency – but now, with Donald Trump in office, the future is somewhat unclear. (Photo by Pedro Szekely/Flickr)

HAVANA — On Obispo Street, past the shops hawking Che Guevara T-shirts and the signature blue neon of El Floridita, the bar that Ernest Hemingway famously frequented, a street performer named Pillo has a clutch of tourists gathered around him in the heart of Old Havana.

He’s holding his dachshund named Chocolate and putting a blonde wig on the dog. Then he asks the dog, “What do we think of Trump?” And the dog comically responds by growling and gnashing his teeth as the tourists laugh and take photos on their iPhones.

“That’s right, see that? We are watching you, Mr. Trump,” announces Pillo, as the dog continues to growl on cue, peering out from under the Trump wig.

And yes, the Cubans are indeed watching and waiting to see what exactly President Donald Trump will do in Cuba – and perhaps more precisely watching to see which Trump will show up.

There’s Trump, the casino owner, who has stated he wanted to build hotels on the island and presumably sees the enormous potential for tourism. It’s starting to hum with American Airlines featuring direct flights from Miami that were sold out just about every day during February. Delta, JetBlue, and other airlines are also adding flights.

And there’s Trump, the presidential candidate, who played to the conservative Cuban voters of Florida by talking tough on Cuba. In several campaign speeches, he threatened to undo all of the diplomatic work by President Obama that changed the course of more than a half-century of foreign policy toward Cuba.

By reestablishing diplomatic relations and entering into a prisoner exchange with Cuba, Obama raised the American flag last year at the U.S. Embassy and raised hopes that the travel restrictions and trade embargo against Cuba would soon end. The hope among most Cubans is that relations between the U.S. and Cuba, just 90 miles apart, will stay on a path toward normalization.

But all of that seems to hang in the balance as the Trump administration is undergoing what it calls “a full review of all US policies towards Cuba.” President Raul Castro already acknowledged the escalating hostility, stating this week in a meeting of regional leaders that “the new agenda of the U.S. government threatens to unleash an extreme and egotistical trade policy that will impact the competitiveness of our foreign trade; violate environmental agreements … hunt down and deport migrants.”

“You can’t contain poverty, catastrophes, and migrants with walls, but with cooperation, understanding, and peace,” Castro said.

The official line from the Trump administration is that the U.S. is “committed to an agenda of ensuring human rights for all citizens.” Offering a bit more of a glimpse into what Trump foreign policy on Cuba might look like, Secretary of State Rex Tillerson, during his confirmation hearings, said that the engagement with Cuba was “not accompanied by any significant concessions on human rights. We have not held them accountable for their conduct.”

As Cuba waits to see which way the wind from the U.S. will blow, a bipartisan delegation of U.S. senators and representatives recently traveled to the island along with academics and biotech executives to meet with the Cuban President Raul Castro. The congressional delegation also met with Havana’s Cardinal Jaime Ortega who played a critical role in bringing the two sides together.

“There’s no going back. The momentum is forward and I believe the momentum will carry U.S. and Cuba relations into the future despite Trump,” said U.S. Rep. James McGovern, a Massachusetts Democrat, who has been instrumental in the process toward normalization.

McGovern, who first traveled to Cuba in 1979 as a college student, has joined U.S. Senator Patrick Leahy (D-Vermont) in leading the effort to restore relations. He said that the Catholic Church has played a critical role in working toward restoring relations, and will inevitably play an important role in holding the effort together in the uncertain days ahead.

“Pope Francis played a major role in persuading both President Obama and President Castro that this was a good deal,” he said.

“The church will definitely be key to ensuring that the agreements remain,” said McGovern.

But as members of the delegation and other observers here have noted, the diplomatic breakthrough between the U.S. and Cuba was made possible in no small measure by the unique personal chemistry between three men: Pope Francis, President Obama, and President Castro. Trump brings none of that chemistry and diplomatic circles here fear the deal could hit the rocks.

Still, the momentum that can carry the relationship forward does seem to be present just about everywhere: in the packed tourist hotels, the over-subscribed business classes that the church is teaching in an attempt to groom a new generation of entrepreneurs, and the patchwork of upscale restaurants that are starting across the city.

In neighborhood parks, revolutionary slogans appear on billboards that feature Fidel looming down on clusters of young people who gather with smartphones to work the internet via wireless networks that are for the first time opening Cuba up to the world.

Also on the congressional delegation was U.S. Rep. Seth Moulton, a Democrat from Salem, Mass., who believes there are benefits to the improved relations not only for Cubans but also for Americans, particularly in the field of medicine.

Moulton, who was accompanying a group of biotech leaders from Massachusetts, said that Cuba has made significant advancements in drugs to treat diabetes and lung cancer that should be made available to American patients.

The delegation also included Northeastern University which, under the leadership of President Joseph Aoun, signed agreements in Cuba to officially establish research partnerships with the University of Havana and other academic institutions. This move is part of expanding Northeastern’s well-known co-op program on a global scale and will focus on marine science and coastal sustainability.

“The diplomatic opening between these two countries is beneficial not only to Cubans but also to Americans in some very real and practical ways as our leaders in the biotech industry and from Northeastern University have shared with us on this trip. We want to keep working to improve these relations,” said Moulton during the trip.

“There really is no turning back. We’re going to keep going forward despite the rhetoric of the Trump administration,” said Moulton.