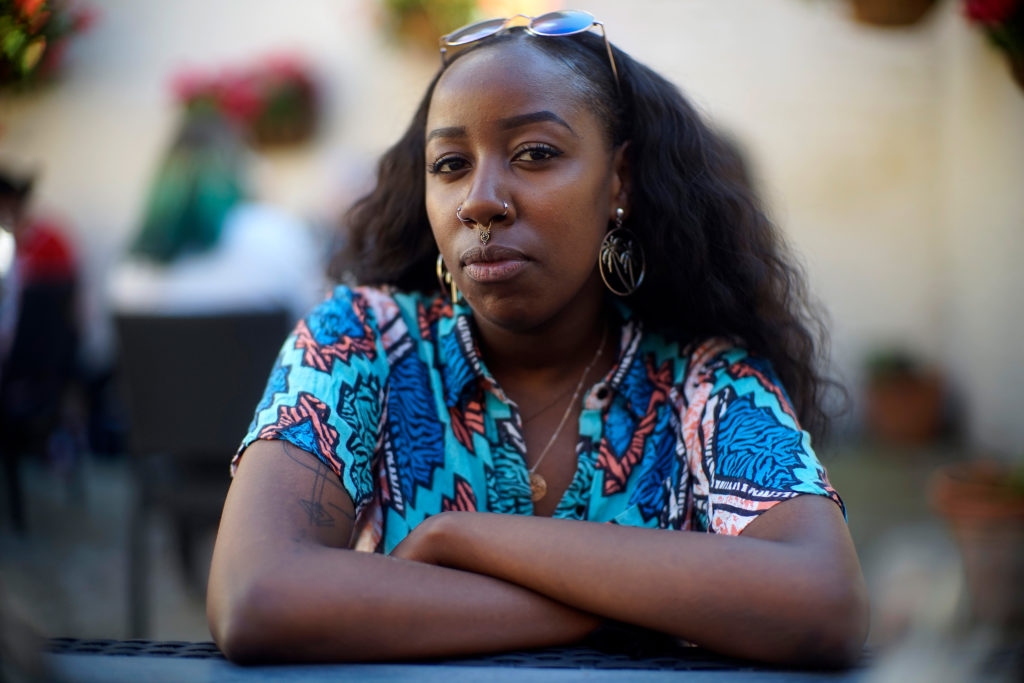 "I fear what will become of my generation," said Anita Israel, a 23-year-old student in London. Her family immigrated from Kenya when she was an infant, and the vote in favor of Brexit has left her feeling uncertain. (Photo by Jocelyn Bain Hogg/GroundTruth)

LONDON — As fallout from last month’s Brexit vote hangs over London, a central paradox of the result troubles millennials here: those who will live longest with the repercussions of a British exit from the European Union are least likely to support leaving.

London voters chose to remain at an overwhelming 70 percent, and frustration in losing the vote is tangible among the high concentration of young, multicultural students and workers here, many of whom are immigrants from EU countries.

Adeline Guerra, 26, is a communications and campaigns advisor for one of the world’s largest global nonprofits. She works in the Middle East and North Africa and holds French citizenship. Guerra has lived in the UK since 2013 and currently resides in the East London borough of Hackney.

“I feel sad. It feels like it was older people who decided for everyone else,” she said. “It was a massive treason.”

Economic indicators in the wake of the June 23 vote show waning investor confidence in the British economy after its move toward a historic decoupling from the EU, a 28-country economic and political bloc. Guerra’s comments reflect the mood of many millennials in the country who feel cheated by older voters will hand down a tumultuous legacy if Brexit goes wrong.

Guerra said she was recently assigned a position based in Jordan, working with refugees fleeing the crisis in Syria. However, she’s worried about her residency status if she leaves the country for a long stretch.

“I’m asking my boss to base my contract in the UK, because I’m too afraid to leave the country,” Guerra said. “Even if [lawmakers] take a long time to leave [the EU], we don’t know what the agreement is going to be. I’m too worried to go, because what if I can’t come back? They can’t promise us anything.”

Three of the most prominent champions of the Brexit movement resigned in the days after the vote, which tapped into working-class pain from the effects of globalization and widespread fears about immigration and terrorism. They have left a leadership vacuum and an uncertain way forward.

A two-year negotiation period would begin after the UK formally gives notice under a clause in the Treaty on European Union called Article 50, but it could be months before notice is given. It’s also possible that the UK will never actually leave, but hundreds of thousands of EU nationals like Guerra who are living and working in the UK are bracing for the worst.

Ludo, a 24-year-old junior public relations executive, grew up in Italy and has lived in London for six years.

“In high school, in Italy, my friends would talk about the ‘British Dream,’ like the ‘American Dream,’ you know?” she said.

A few nights after the vote, Ludo and her friends stood on the sidewalk outside a packed dance club in Islington, North London, where they discussed their general disappointment with the result of the Brexit vote. She was passionate and sad as she spoke about her hope that young people like herself could “make it” in Britain.

Ludo declined to give her last name because she’s afraid of ramifications from her employer,  a multinational advertising and PR firm. But she’s confident that her employer would sponsor her work visa if it came down to it.

“If I didn’t already have experience, or I was still a student, I probably would not be able to get sponsorship,” she said. “I am worried for my friends who are artists and musicians who may not have this opportunity.”

Other established migrants from EU countries are nervous, too.

“It is a very uncertain time here at the moment and none of us know how the changes, if any, will affect us,” said Leftos Dousis, 25, a Greek architect who has been in the UK since 2009. “I wouldn’t count on [my employers] sponsoring me.”

There are an estimated 3 million European workers in the country, but the number may be much higher in reality. There is no official system to document EU migrants — the borders of EU countries allow for freedom of movement from place to place, and airport entries are the only record of migrants into the UK.

For this reason, it’s equally difficult to say who will be allowed to stay and who will be forced to leave, should the borders tighten following the Brexit.

Professor Ramon Pacheco-Pardo, a European Union policy expert at King’s College in London,  is Spanish immigrant who came to Britain in 2006.

There are two possible scenarios for the future of EU nationals now living in Britain, Pacheco-Pardo believes.

“The first scenario is that the UK wants to retain access to [the EU’s] single market and nothing changes — and this is much more likely than it seems right now,” he said, predicting that in a few years immigration could become a less important political issue, especially if the economy continues to crash.

“The second [option] will be for free movement for highly skilled young people, who are specialized in a particular field. But this would be more difficult for laborers,” Pacheco-Pardo said.

“I think it’s not going to be an easy process, and it needs to be very clear what the red lines are,” he added. “And without free movement, you don’t have the single market anymore … I don’t think much will change, because it’s not in the best financial interest of the UK. Most politicians in this country are pragmatic and will push to remain part of the single market.”

Pacheco-Pardo also noted that there are over 1 million Britons living in Spain, and that immigration questions will also affect UK nationals living abroad. Similar to here, the implications of Brexit may spell trouble for those who aren’t considered highly skilled.

“In Spain, [many British] are low-skilled and they work in bars or restaurants, and it works both ways. If you don’t have the right skills, it might become more complicated to move,” he said.

Boris Johnson, Leave campaign leader and former mayor of London, reiterated that he believes free movement should continue in a newspaper column this week.

He wrote: “There is no risk whatever to the status of the EU nationals now resident and welcome in the UK, and indeed immigration will continue – but in a way that is controlled, thereby neutralising the extremists.”

The Vote Leave campaign, pushed forward by right-wing politicians Johnson and Nigel Farage with help from Prime Minister David Cameron, doubled down on anti-immigration rhetoric during the lead-up to the vote – a series of speeches, articles and interviews that many here have called xenophobic.

The Leave group has been widely accused of inflaming racist, anti-muslim sentiment in the country, as well as propagating false economic numbers and making promises that they were in no position to keep. All three men announced their resignations following the Brexit vote.

But the tactics didn’t work nearly as well in London, possibly because of the nature of the city itself. London is a destination for many of Europe’s millennials who aren’t able to achieve career growth in their home countries, as the continent goes well into over half a decade of mass underemployment of young people.

“In London, you feel like anything’s possible. It feels like in London is where it’s happening,” said Guerra. “If I had stayed in France, I wouldn’t be in the job I’m in today and I wouldn’t be making the money I am. You can meet people from everywhere, and the way in which London is mixed, it’s like New York used to be — a melting pot of the world … I don’t want to lose that.”

Guerra said that she’s disappointed that disengaged youth – people who might have voted to remain – didn’t register in time or abstained from participating.

“I’m upset at my British friends who feel disengaged with the system, who didn’t vote, or who were too busy and who were at Glastonbury or whatever,” said Guerra, referring to the popular music and arts festival. “I’m quite frustrated with my friends who decided to opt out of the political system because those decisions matter for their futures and the people they love. There’s so many people I know that didn’t vote, and I am really mad, really frustrated with them.”

It’s not just the EU nationals who are furious, however.

“Unfortunately, it was the older generation that voted to leave, and of course I feel it was unfair,” he said. “In Scotland, they include 16 to 17 year olds in the vote, but they didn’t allow that here … It’s going to be people who are in their 20s and teens now, today, who are not going to be able to enjoy being in the EU in the future.”

Kahn says Brexit was an impetuous choice that UK citizens will come to regret.

“Many people made this choice quite rashly. People who voted to leave are the same people who go to Spain on holiday and go to France to buy wine and cheese, and they made this decision without knowing what it really meant to leave [the EU],” he said, hotly, from his central London offices in Battersea. “They were brainwashed by bad propaganda by the Leave campaign and a lot of lies.”

Kahn is a first-generation Brit whose parents are Sri Lankan refugees, and he voted to remain in the EU. He feels like it’s his responsibility to speak out on behalf of other immigrants and refugees who might not have a voice or a vote.

“Seeing my friends and seeing their social media, and talking to them, they were all very passionate about staying in the EU,” said Kahn. “London will always have opportunities for people from Europe, because it’s such a cosmopolitan city, with wonderful culture, and so many jobs that require you to be multilingual and different cultural backgrounds.”